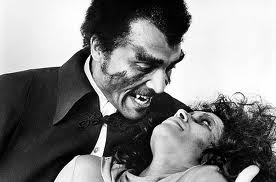 Though these two blaxploitation films had different directors, scripters Raymond Koenig and Joan Torres worked on both screenplays, so that the short-lived "series" of Blacula films has a solidarity of tone-- a solidarity often sacrificed by series-concepts that last several years, as I've had cause to observe for the James Bond series.

As with many series-characters, Blacula's "origin-story" has the strongest mythicity. The setup is somewhat preposterous: during the 1700s the highly educated African ruler Mamuwalde (William Marshall) journeys, along with his wife Luva, to Transylvania to seek the aid of Count Dracula in ending the European slave trade.  Yet though the concept behind this ambassadorial mission doesn't make much sense, it delivers an emotional payoff when Dracula chooses to steal Mamuwalde's bride from him.  As icing on the cake, Dracula vampirizes the prince, imprisons him in a coffin so that he'll never be able to slake his undying thirst, and forces on him the gift of his own name, slightly altered: "You shall be-- Blacula!"  Luva is not seen to die but one presumes that she does, in that the main plot concerns her reincarnation.

Two centuries later, a salt-and-pepper team of interior designers purchase several items from Count Dracula's restored castle (where a guide informs them that the evil count was finished off by Doctor Van Helsing-- a rare bit of fidelity to the Stoker novel).  The designers ship the items-- including the coffin containing Blacula-- to Los Angeles.  In a story-wrinkle possibly swiped from the 1967 episode of DARK SHADOWS that introduced vampire Barnabas Collins, the designers accidentally set Blacula free and are killed by him.

As it happens, Blacula spots a woman named Tina, when she comes to mourn the "pepper" half of the designer-team.  The vampire recognizes her as the reincarnation of his deceased wife Luva.  While keeping himself alive with frequent feedings-- thus creating more of his kind-- Blacula romances Tina.  However, an alert police pathologist, Doctor Thomas, examines the body of one of Blacula's victims and begins to investigate other reports of vampire-like slayings.  Thomas finally succeeds in getting the L.A. cops to beard Blacula in his den. Tina is slain, so that her spirit is lost to the vampire lord.  Tormented by this second bereavement, Blacula immolates himself by stepping into the sunshine.

SCREAM BLACULA SCREAM struggles to have the same emotional appeal as the "reincarnated lover" storyline-- also possibly borrowed by the writers from DARK SHADOWS-- but the struggle doesn't prove successful.

The bones of Blacula fall into the hands of a voodoo priest, and he in turn sells them to Willis, an acolyte belonging to a voodoo cult.  Willis harbored ambitions to be the high priest of the cult, but he was passed over by a popular vote of the members, who chose instead a priestess named Lisa (Pam Grier).  Willis performs a revival ritual in the hope of using Blacula to destroy his rival. but though Blacula is reborn, he takes control of Willis by vampirizing him.

Forced back to life, Blacula makes the acquaintance of Lisa and her cop boyfriend Justin.  Once he learns of Lisa's occult powers, he pursues her, not for romance, but with the end of getting her to cure him of vampirism. Thus in theory he would be able to return to his beloved African land, albeit in modern times.  Inevitably Blacula continues to spawn vampires whenever he feeds-- no fancy Stoker-ritual involved here-- so that Justin and his cop allies end up storming Blacula's crib while Lisa endeavors to perform a curative ritual.  The ritual fails and Blacula takes out his frustrations on the cops.  Lisa, terrified by the monster's sheer power, kills him by stabbing a voodoo-doll image of Blacula with a wooden arrow.

Both films benefit hugely from the presence of William Marshall, as well as the design of his vampiric "look," which is probably one of the most recognizeable vampire-lords in cinema history.  Thanks to his own stature Marshall looks great tossing fragile mortals around.  However, he's really the only character in the story who's more than a flat stereotype.  Even Pam Grier, who in the same period became famous for playing "ballsy" women in COFFY and THE BIG BIRD CAGE, gives a dull performance as a dull character.  The voodoo angle of SCREAM is also not exploited for much mythopoeic effect, though the film is notable for presenting voodoo as a legitimate religion.

As noted above, the first film's most mythic moment is the equation it makes between the institution of African slavery and the predatory Count Dracula, whom Mamuwalde calls an "animal"-- a canny rebuttal to stereotypes of the black race as "animalistic."  Admittedly, when the scripters named the lead vampire "Blacula," the idea was almost certainly was conceived as a marketing gimmick.  Still, the idea that the lead character loses even his name to his white oppressor speaks volumes.  It's an ingenious way for a pop-culture character to speak to a phenomenon reported by many African-Americans: the feeling of being continually implicated in the very thing that oppresses him.

SCREAM never becomes as ambitious as the first film, though it does feature an interesting scene in which Blacula is accosted on the street by two pimps.  The pimps attempt to rob the caped figure-- perhaps envying his superior sartorial style-- and won't take his plea of empty pockets for an answer.  Before Blacula kills them both, he levies a judgment on them as having copied their ancestors' slave-masters by enslaving their "sisters" and acting like slaves themselves.  One might read this sequence as an insight into a sort of cultural inferiority complex, in which the African-American comes off second to the African who has never known slavery, or at least not a slavery informed by racism.

However, the fact that the scathing comment comes from a murderous vampire does rob Blacula of some if not all moral high ground.  In fact, the film comes full circle at the point of the vampire's final battle with Justin, in which he refuses to acknowledge Justin calling him "Mamuwalde."  "The name," growls the vampire, "is BLACULA!"  It's the only time the character uses the name imposed on him by the evil count, and to me it signfies his wrathful decision to accept being a vampire, being a monster outside human affiliations-- moments before he's destroyed.  To be sure, the film ends slightly before he dies, freeze-framing on Blacula's death-throes, as if the creators might've been hedging their bets for purposes of a second sequel.  Fortunately, the series ends on this pleasant note of closure


Posted by Gene Phillips at 3:46 PM
Email ThisBlogThis!Share to TwitterShare to FacebookShare to Pinterest
Labels: the marvelous