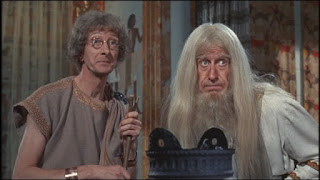 These two comedy-films don't usually get listed in compendia of fantastic films, but they both have credentials for what I've termed the "marginal-metaphenomenal," meaning metaphenomenal elements that barely have any impact on the film's main plot.

CARRY ON CLEO, one of the popular British "Carry On" comedy-series, is just a fair outing.  It chronicles the story of primitive Briton Hengist, who finds himself abducted as a slave by Roman soldiers and therewith transported to Rome (composed of leftover sets originally built for the 1963 production of CLEOPATRA).  There are some fitfully funny bits here-- I note that some writer worked in a character named "Horsa," possibly to revenge himself on having to learn the story of Hengist and Horsa in his school days.  However, I found the film as a whole much less clever than CARRY ON SCREAMING two years later, much less 1970's CARRY ON UP THE JUNGLE.


The one marvelous aspect of this silly comedy has to do with the famous "beware the ides of March" warning Julius Caesar receives from a soothsayer.  In JULIUS CAESAR, the play that made the prophecy famous in the domain of western literature, there's no indication that the prophecy is anything but a lucky guess.  In CARRY ON CLEO, however, the soothsayer (played by future "Doctor Who" Jon Pertwee) is treated as if he's a genuine psychic, complete with a literal vision of Caesar's impending death.  Frankly, the joke associated with this bit of business has evaporated from my mind, so it must not have been all that memorable. 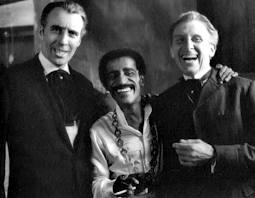 ONE MORE TIME is the second of two films which might be considered the last gasp of the Sinatra Rat Pack. Stars Peter Lawford and Sammy Davis Jr. had been long-time members of the Pack.  But by the time (1968) the first film in the two-film series debuted, the bloom was more than off the rose for these middle-aged entertainers, whose associations with the Las Vegas life probably doomed them in the eyes of the young and the counter-cultural.

As in the first film SALT AND PEPPER (the white guy was "Pepper" and the black guy was "Salt," yuk yuk), Lawford and Davis play night club owners who get mixed up with criminal shenanigans.  The script of the second film, like that of the first, is credited to Michael Pertwee-- coincidentally, the elder brother of Jon, which I just learned as I typed this.  However, it's interesting that TIME is directed by Jerry Lewis-- the only Lewis-directed film in which the actor/director did not star-- and that most of the time Sammy Davis' character Salt seems to be recycling Jerry Lewis "takes" and "schticks."

Of all the scattershot occurences in the forgettable plot, the one scene that most reminded me of a Lewis movie-- particularly THE LADIES' MAN-- is one in which Salt opens a door in Lawford's manor, and sees, just for a second, Count Dracula (Christopher Lee) and Doctor Frankenstein (Peter Cushing) hanging out in the cellar.  It would have been easy to dismiss Salt's experience of these baffling boogeymen as nothing more than a "fallacious fragment;" that is, a scene in a comedy-film which no one is supposed to take seriously, like the opening bit in THE ALPHABET MURDERS in which Tony Randall's character speaks to the film's audience.  However, though one never sees Dracula and the doctor again, Davis chases one of the film's villains, who takes refuge in the cellar.  Davis stops short as he hears a tortured scream, as the villain presumably meets villains far worse than he.  I presume that for Lewis this was a profound piece of cinematic deconstruction, since he did so many similar schticks in his career.  Personally, I believe ONE MORE TIME-- which would have been better titled ONE LAST TIME-- might have played better as a standard haunted-house comedy along the lines of the aforementioned CARRY ON SCREAMING.

ADDENDA: I neglected to mention that ONE MORE TIME itself utilizes the naturalistic version of the "fallacious figment" in exactly the same manner seen in ALPHABET MURDERS. Here the figment appears not at the beginning but at the end of the story, when both Lawford and Davis become aware of the watching audience and attempt to summarize the plot for said audience's benefit, before moving on to the merciful fade-out
Posted by Gene Phillips at 3:33 PM
Email ThisBlogThis!Share to TwitterShare to FacebookShare to Pinterest
Labels: delirious dreams and fallacious figments (n), the marvelous