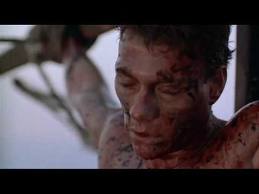 Possible subtitle for CYBORG: "the Passion of the Muscles from Brussels?"

Director Albert Pyun, while never better than a journeyman talent, has at times succeeded in making good popcorn films, ranging from his first directorial effort-- the 1982 CONAN-ripoff THE SWORD AND THE SORCERER-- to his 1997 take on John Woo's "heroic bloodshed" schticks in MEAN GUNS.  At the same time, he's also helmed many execrable films, particularly one of the worst comic-book superhero adaptations, 1990's CAPTAIN AMERICA (his second assignment after CYBORG).

CYBORG made a lot of money in 1989.  One reason it succeeded was because it only cost $500,000, cutting costs for its futuristic scenario by a clever selection of mundane settings bleak enough to suggest a post-apocalyptic future.  Another reason was the casting of lead Jean-Claude Van Damme. However, since he'd only had one break-out film prior to CYBORG, 1988's BLOODSPORT, it's easy to imagine Van Damme striking out with his sophomore star-effort.  The stunts, which include a lot of martial arts battles and various mundane gunfights, are adequate but nothing special.  And despite the musical homages coded in the character's names-- many of whom are named for brands of guitar like the "Gibson" and the "Fender"-- the music is like a more monotonous imitation of a John Carpenter score.

CYBORG's success certainly isn't related to any profundities in the script, allegedly written by Pyun in one weekend (though imdb doesn't credit the director with any writing-input).  It takes place in a standard apocalypse-world wherein humanity has been ravaged by some disaster-- a plague in this case-- which presumably is still going on though we rarely if ever see future-people who are sick.  The "cyborg" of the title is no more than what Alfred Hitchcock called a "Macguffin," a person or object over which two opposed groups contend-- in this case, a woman who voluntarily allows herself to be "cyborgized" so that she can be the courier for data that can lead to the cure of the plague.  She intends to transport the data overland to Atlanta for its implementation, but a gang of scruffy pirates, led by the evil Fender Tremolo, intercepts her.  Gibson tries to stop Fender, not to save the cyborg but to kill Fender, who, we later learn, killed members of Gibson's family and abducted his stepdaughter Haley.

Characterization is just barely evident.  Gibson shares roughly the same motivations as John Wayne's character Ethan Edwards in 1956's THE SEARCHERS, but Gibson barely even mentions his motivation to find Haley, nor does he react overmuch when he learns that she's been inducted into Fender's pirate-tribe.  He shows no emotion save the desire to destroy Fender, and even when a female traveler named Nady informs him that Fender has absconded with a possible cure for the plague, Gibson can think about nothing but killing Fender.  To a small degree Nady functions as Gibson's conscience, gradually forcing him to become more of a Good Samaritan, but the script certainly doesn't follow the progress of his character-growth.  Nady dies but Haley is rescued (the latter event showing another resemblance to THE SEARCHERS), but neither event inspires the emotion that Gibson feels for destroying his enemy.

The moment in which Van Damme's hero Gibson is crucified has no more mythic resonance than it does when the same thing happens to the hero of SWORD AND THE SORCERER-- a scene which was one of the more egregious swipes from the CONAN movie.  At the very end of the film, the cyborg-- who sports the ambitious but not very evocative name "Pearl Prophet"-- succeeds in getting the cure-information to Atlanta, but tells one of the doctors that Gibson "may be the real cure."  This gets a little closer to the resonance of the myth-hero who restories the order of the cosmos by slaying an evil warrior or a monster, but I can't say Pyun pursued the metaphor with any consistency.

The one thing CYBORG has going for it is that it was an unapologetic plunge into a pure testosterone-fantasy, sans even the sort of comic relief one usually sees in more mainstream adventure-films.  CYBORG is first and foremost a film in which big men roar at each other, shoot each other, and hit each other, over and over.  There's a little variation when the female lead gets in on the action, though as noted above she doesn't end up surviving the rough trade.  And whatever one thinks of this kind of popcorn-adventure flick, at least the films of the 1980s took some chances by promoting new faces to represent the genre, rather than compulsively pushing the action-heroes of thirty years ago, as we see happening in 2013 with the simultaneous release of new vehicles for the very old Bruce Willis, Arnold Schwarzenegger, and Sly Stallone.