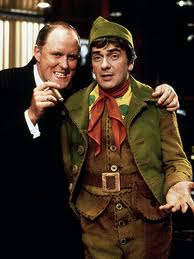 Though SANTA CLAUS CONQUERS THE MARTIANS is the more familiar candidate on lists of "worst films of all time," the 1985 Salkind production SANTA CLAUS is for me a better candidate.

Following in the wake of the Salkinds' success with the early SUPERMAN films-- though not so much with follow-ups like the 1984 SUPERGIRL-- the producers tried their luck again with another flying figure.  Despite the box-office failure of SUPERGIRL, the producers brought back the film's director Jeannot Swarc for their Xmas-adventure, as well as the writing-team that had been the dominant scripters of the Superman films (though not the one with Superman's cousin).

The script is the greatest liability.  It takes a flat, by-the-numbers approach to the legend of Santa Claus.  The only section that sustains a strong sense of wonder is the opening, which as it happens Swarc considers (in a DVD commentary) to be his favorite part of the movie.  A voiceover informs the audience that Santa's workshop exists at "the top of the world," where no one can see anything but snow and ice.  The presence of the Northern Lights and the North Star sets a potentially wondrous mood for the advent of the embodiment of Christmas generosity.

Santa (David Huddleston) and his wife Mrs. Claus (Judy Cornwell) have their origins in two mortals in 14th-century Scandinavia.  They're stranded in a blizzard and face the threat of imminent death.  However, a group of elves spirit them into their enchanted world and inform that the two of them, who have no children, are fated to distribute gifts to children all over the world.  I rather liked the arbitrariness of the script's "fate," which certainly makes it possible for the scripters to leap over any questions about why the elves think there should be a Santa. The situation of "elf-abduction" bears a slight resemblance to traditional folktales about elves abducting humans into their ranks, as with the story of Thomas the Rhymer.

After this hint of promise, the script then zooms through the catalogue of Santa-myths-- the workshop, the "naughty or nice" list, the flying reindeer-- as if the North Pole is on fire.  Since it would have been awkward to recall that Santa is a very Eurocentric myth, the film deftly skips over the intervening centuries in order to reach the 20th, so that the main plot can begin.

The conflict, such as it is, revolves around Patch (Dudley Moore) ,an elf who unintentionally causes Santa no end of trouble.  Moore was the most bankable star of the Salkind production but the staid script gives him nothing fun to do.  In an attempt to demonstrate his worth to Santa, Patch makes contact with a crooked toy tycoon, B.Z. (John Lithgow).  B.Z. determines to use Patch's toymaking skills in order to make a fortune.  One of Patch's creations goes wrong and proves a threat to its buyers, but B.Z. refuses to recall the item and tries to abscond with the profits.  Santa, aided by two rather colorless children-- one of whom is B.Z.'s niece-- must intervene to stop the deadly toys and save Patch's life.

While I have seen worse movies than SANTA CLAUS, it's still much duller than most of the low-budget wonders that usually frequent worst-film lists.  The only actor who gets to have fun with his role is Lithgow, who essays B.Z. with an acidulous Snidely Whiplash flair.  Everyone else just goes through the motions. 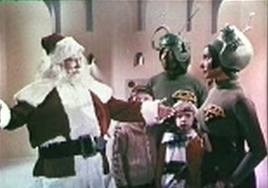 In contrast, though 1964's SANTA CLAUS CONQUERS THE MARTIANS is a silly kid's fantasy, the story is much more coherent than the expensive Salkind production.

The conflict arises because of the cultural pollution of the civilization of Mars, who live in a rigid, anti-emotional quasi-Marxist regime.  Given that depiction, it's rather surprising that Martian kids get to watch Earth television-- haven't the Martians heard of Politburo?  But because the Mars kids watch Xmas broadcasts, they begin to year for visions of sugarplums.

Though it would seem to contradict the Martian ideal of science and order, the leaders decide to go to Earth and kidnap Santa Claus, so that he will bring Christmas joy to Mars.  After some initial failures in which the Mars-men mistake store-Santas for the real thing, they succeed in their endeavor.  However, with the help of two Earth children, Santa manages to find a substitute emissary-- a native Martian who wants to act like Santa-- and endorses him as Mars' own gift-giver, while returning to Earth himself.

Though the script is many leagues inferior to a work like MIRACLE ON 34TH STREET, in its simple way it's addressing the same theme: the need to believe in outlandish fantasies rather than expousing a utilitarian scientism.  I'm not claiming that MARTIANS addresses the theme with any sophistication, but at least it has a simple argument to make, in contrast to the 1985 SANTA CLAUS, whose only theme is the expulsion of the Bad Guy.  (It's a quite literal expulsion, as B.Z. ends up rocketing out into space in comic fashion.)

And, as noted above, MARTIANS is at least lively, no matter how meagre its performances and budget might be.  One scene stands out for me.  The Martians, having found their way to Santa's workshop, send a clunky robot in to capture their quarry.  Santa is such a jolly old elf that he mistakes the robot for a big toy, and in Santa's presence, the robot acts as if it has been "reprogrammed" into toy status.  I wouldn't rush to claim that this scene embodies the theme of Christmas magic conquering science.  But it's not totally irrelevant either.


Posted by Gene Phillips at 3:32 PM
Email ThisBlogThis!Share to TwitterShare to FacebookShare to Pinterest
Labels: the marvelous