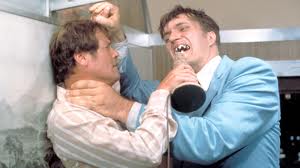 
Three years passed between Eon Productions' 1974 THE MAN WITH THE GOLDEN GUN and 1977's SPY WHO LOVED ME, thanks to legal and financial problems.  Without celebrating the misfortunes that caused these production problems, the delay may have contributed to making the third Roger Moore-Bondfilm a much better film than the previous entries.

As has been my practice here, I reread the Fleming novel before rewatching the film.  Though film-producers in general have a habit of not following their source material, here the Eon producers can't be faulted, for their contract forbade them from using anything but the book's title.  They still managed to find inspiration in the Fleming work, though, and probably concocted a work more pleasing to moviegoers than any straight adaptation of the novel.

SPY the novel has a entirely naturalistic phenomenality, and diverges from the rest of Fleming's series in that the narrative unfolds from the first-person vantage of Vivienne Michel.  This young woman, lured into an insurance scam, has her life endangered by two professional thugs, only to be saved by the chance intervention of James Bond.  The two thugs, "Sluggsy" and "Horror," are close to being DICK TRACY grotesques, with one described as having steel-capped teeth while the other as suffering from congenital hairlessness.  However, like some of the "freakish" hoods in the earlier DIAMONDS ARE FOREVER novel, these mundane hoods never convey the sense of "strangeness" that marks the phenomenal mode of the uncanny. They're just plain ugly.

Sluggsy's steel-capped teeth, however, inspired writers Richard Maibaum and Christopher Wood to create one of film-Bond's best sparring partners, the titanic, steel-toothed Jaws (Richard Kiel).  If the Jaws character were the only metaphenomenal aspect of SPY, his strength, near-indestructibility and steel teeth would qualify for the trope of "outre outfits skills and devices."

As it happens, though, the SPY-film falls into the category of the marvelous by virtue of its main villain, Karl Stromberg (Curt Jergens) as a sort of demi-Nemo who is devoted to the beauties of the ocean.  He also plans to bring about armageddon in order to make a new start for mankind.  The "mcguffin" in the plot is a mundane submarine tracking system, but as Bond and his female lead chase after the device, they uncover Stromberg's plot, which includes his having constructed his own underwater city whereby to survive the cataclysm.

Stromberg is certainly the reason I didn't like this film much the first time round.  His love for the sea ought to make him a very dynamic Bond-villain, given that two of the best Bond-villains in the books, Emilio Largo and Mister Big, carried nautical associations.  But though Curt Jergens does his best with the character, the Stromberg character is never more than the sum of his parts.

Both the book and film serials starring James Bond have often been accused of being demeaning or condescending to women.  I've disputed this in other reviews, but SPY WHO LOVED ME is a definite improvement over MAN WITH THE GOLDEN GUN, where the lead female was played as a ditz.  The heroine who was "spy-loved" in the novel was not entirely defenseless-- she was at least able to use a gun-- but the film's female lead is much more formidable.  In tune with the era's appeals to ideological compromise between Western democracy and Soviet Communism, Russian spy-girl Anya Asamova (Barbara Bach) is played as Bond's opposite number on the other side.  The script never condescends to Asamova, who outmaneuvers Bond on a couple of occasions and shows herself able to defend herself against normal opponents.  I would have liked to see her be a little more dynamic at the film's climax, but this wasn't a deal-killer.  Bach's romance with Bond-- who, we learn early on, has accidentally killed Asamova's lover-- is handled intelligently; she certainly doesn't fall into 007's bed at the crook of Bond's finger.

Finally, though I felt Roger Moore never found a decent take on Bond in his first two films, the script gives Moore a much more centered role.  The Bond of LIVE AND LET DIE is effete despite his skills, and the Bond of GOLDEN GUN is frankly clownish.  But in SPY Moore's Bond seems far more the professional spy-- and killer-- than he had seemed to be in any of the Eon Bond-films since THUNDERBALL.