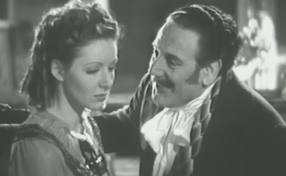 
Two of the three films examined here are the first ones I've reviewed in the oeuvre of British horror-actor Tod Slaughter, and two retell the famous tale of bloodthirsty butcher Sweeney Todd.

CRIMES AT THE DARK HOUSE is loosely based on a Wilkie Collins novel I've not yet read, THE WOMAN IN WHITE-- though I have seen film adaptations thereof.  The Collins story has been substantially rewritten to feature the thespian talents of Slaughter, for in the novel the character of Sir Perceval Glyde is a nobleman with a nasty secret.  At the start of this 1940 film, Glyde is killed (via a spike through his head!) by a bounder whose true name is never revealed, and who successfully impersonates Glyde on his return to England.

Interestingly, though DARK's production values are modest and Slaughter's character dominates the film, the film still manages to be true to one Wilkie Collins theme: his support for women and sympathy for their marginalization in British society.  Phony Percy, on returning to the murdered man's estate, learns that he has no money in his coffers.  He plots to marry Laurie, a rich-- and much younger-- heiress.  Despite the fact that Laurie has an age-appropriate (but title-less) suitor courting her, Phony Percy uses the strength of his title to bring pressure on Laurie through her father, so that the poor girl doesn't even get the courtesy of a lengthy engagement.  In contrast to many similar melodramas, the heroine isn't saved from marriage and the connubial bed by happy fate.  But that's not enough for Phony Percy.  He also carries on a clandestine affair with a chambermaid (whom he kills when she becomes pregnant), flirts outrageously with Laurie's sister when she comes to live with them, and plots to kill Laurie so that he can inherit all of her money.  In a complicated subplot-- one derived from the novel, and so far too involved for this kind of fast-paced potboiler-- Percy also makes an ally of the head of the local asylum, Doctor Fosco, who eventually arranges for Laurie to be condemned as a madwoman.

Though one of the asylum's madwomen wanders around the estate in white clothes (hence the title of the Collins original), she's never believed to be a ghost, even if she does "haunt" Percy briefly.  Whatever the phenomenality of the Collins novel, this film is entirely in a naturalistic universe, and only the killing-by-spike even registers as a "bizarre crime."  Slaughter, never reputed to be a subtle performer, is a little more restrained here than in SWEENEY TODD, though there's never a moment when Phony Percy is anything but a villain gleefully looking forward to his next evil act. 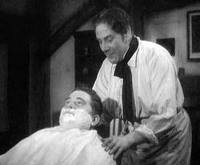 SWEENEY TODD, on the other hand, presents Slaughter in all his hand-rubbing, lip-smacking glory.  In keeping with early versions of 'demon barber" story, Sweeney Todd has no particular deep motive for wanting to kill off his customers with his special barber's-chair, or selling their dead bodies to Mrs. Lovatt, his accomplice in crime, to bake into meat-pies.  He's just in it for the psychopathic love of killing, which is why I would label him a "perilous psycho," even though he's a good deal more businesslike than most of his kind.  Slaughter wrings every ironic nuance out of his catch-phrase, "I'll polish you off," a line he speaks to customers to assure them of his efficiency in his duties-- when of course he really means to finish them off.  His psychotic nature is of the uncanny type, even as his mechanical barber's chair  also qualifies in any uncanny-category, being an "outre device."

Though his accomplice Mrs. Lovatt secretly pines after him, Todd brings about his own doom by aspiring above his class.  He covets Joanna, the daughter of an aristocrat, who's in love with an age-appropriate man named Mark.  Mark leaves for a time to make his fortune, and when he returns to London, Todd tries to kill him.  Mrs. Lovatt, who wants to block Todd's marriage, preserves Mark's life and sets him free-- which leads to a complicated but exciting denouement in which Mark, Joanna and their allies uncover the perfidy of Sweeney Todd.  As in most versions Todd kills Mrs. Lovatt for her betrayal and perishes in his own barber-shop.  As with CRIMES production values are modest but skillful direction and sets make it seem like a more expensive film. 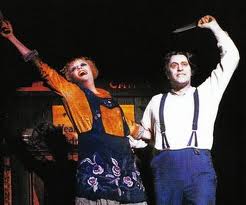 The 1982 SWEENEY TODD I'm reviewing was the filmed version of a musical stage-play composed by Stephen Sondheim and Hugh Wheeler, which in turn adapted a non-musical production by one Christopher Bond.  This storyline, said to be the first one in which Todd was given a more sympathetic backstory-- one in which he's stalking the judge who condemned him to penal servitude-- was also the one employed in the best-known current version, Tim Burton's 2007 SWEENEY TODD.  Sweeney is a more tormented type of "psycho" here, though actor George Heard invests him with far more humanity than did Tod Slaughter. On the other hand, I didn't like Angela Lansbury as Mrs. Lovett, and preferred the version of the 1936 film, who was more of a dowdy slattern. It's a quality production, but since I don't have anything to say about the stagecraft, I'll content myself with praising Heard and the prop-department's ingenuity in presenting the deadly barber-chair on an open stage.
Posted by Gene Phillips at 2:44 PM
Email ThisBlogThis!Share to TwitterShare to FacebookShare to Pinterest
Labels: bizarre crimes and crimefighting (n), bizarre crimes and crimefighting (u), diabolical devices (u), perilous psychos (u), the naturalistic, the uncanny