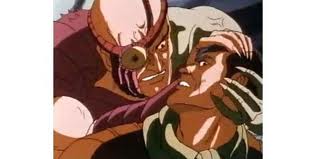 
In my review of THE FACE OF FUMANCHU I wrote:

The only literary virtue of racist fictions is that they give the writers a motivation to create the most delirious forms of evil they can imagine, and then project them onto the representatives of what has been termed (rather simplistically) “the Other.”

In this post I’ll be dealing with two animated films, both of which were spun off from cartoon teleseries properties.  None of the iterations of these properties focused totally upon racial/ethnic myths after the example of Sax Rohmer’s “Fu Manchu” novel series.  Still, I surmise that modern Marxist ideological readings would see objectionable content in both franchises, though for different reasons in each case.


The history of the G.I. Joe telecartoon franchise is relatively simple.  Though the “G.I. Joe” line of masculine toys (later dubbed “action figures”) dates back to 1964, the property did not beget an animated cartoon until said toy line was reinvented in the 1980s.  In that version “G.I. Joe” became the name of a group of American-based anti-terrorist specialists.  Though the organization maintained the semblance of a hierarchy like that of the U.S. Armed Forces, the individual “Joes” sported names and costumes more comparable to superheroes than to soldiers.  In an earlier era such a group of eccentric adventure-heroes probably would have squared off against Communists or crime syndicates.  But 1980s telecartoons were strongly influenced by the so-called “political correctness” meme.  Thus G.I. Joe’s main opponent was a “terrorist organization” named Cobra, though unlike most real-world terrorists Cobra had no ties to any nation or ethnicity.  Since the Joes included a diverse representation of races, creeds, and colors, they could be safely labeled “American.”  However, to impute any ethnicity or national origin to the villains of Cobra—the fanatical leader Cobra Commander, his weapons-maker Destro, and many others—might have drawn criticism that the show was stigmatizing real peoples by making them the targets of heroic wrath in a kid’s cartoon.


G.I. JOE—THE MOVIE breaks slightly with this program.  For the first time in an animated "G.I. Joe" cartoon, it’s stated that the Cobra organization has its origins in a mysterious place called “Cobra-la,” patently a jokey invocation of the famous “Shangri-La” Tibetan paradise of the James Hilton novel LOST HORIZON.  Thematically the weird denizens of Cobra-la have less in common with Hilton’s saintly Tibetans than with Fu Manchu.  Just as the mad Chinese doctor specialized in making weapons out of all manner of bizarre plants and animals, Cobra-la’s people—who are not literally Asian—also produce all manner of weird genetic mutations, most of which are weird man-eating plants, colossal insects, and anything else that suggests a more primitive, and hence more grotesque, civilization.  Early in the story Cobra-la’s ruler “Golobulus” (Burgess Meredith) appears before the leaders of Cobra.  He announces that his people have long been the power behind Cobra, and that they’re taking over thanks to Cobra Commander’s many blunders.  For good measure, Golobulus causes Cobra Commander— formerly a native of Cobra-la—to undergo an evolutionary regression, gradually transforming him into a snake with partial human memories.


The Joes only find out about the new players in the game when the Cobra-la agents lead a successful raid on a new Joe super-weapon, an energy-transmitting device.  A new character—name of Lt. Falcon (Don Johnson)— is partly responsible for the raid’s success, having sluffed off his duties to chat up a lady friend, who is in reality a Cobra agent.  Falcon’s failure becomes the “B-story” of the movie, as Falcon—brother to regular character “Duke”—must redeem himself by undergoing intensive retraining.  Fittingly, given that G.I. JOE is a cartoon version of the military, Falcon receives his retraining from “Sergeant Slaughter,” a new character in the JOE universe though he was based on the persona of a popular wrestler of the period, one who dressed up like a boot-camp topkick.  In addition, Falcon’s boot-bunkmates include a guy who dresses like a basetball player and a female martial-artist who does her best fighting with her eyes closed.  At this point, any references to the real world of military behavior begin to seem almost “camp.”

Falcon does finally shape up and fly right. Perhaps in dererence to the stature of the movie star voicing him, Falcon gets to be the hero who principally triumphs over Golobulus, although the climax pretty much gives everyone in the populous regular cast the chance to put the slug on a bug, or at least a bug-using evildoer.  Though the regular teleseries was only sporadically inventive, I have to credit the animators on this project with having reached the same delirious heights of inventiveness seen in the Sax Rohmer novels.  Most amusingly, as if to invoke (very indirectly) another “Eastern” enemy, the inhabitants of “Cobra-la” go into battle yelling the name of their country, using the same sort of ululation that some Americans associate with Muslim terrorists. 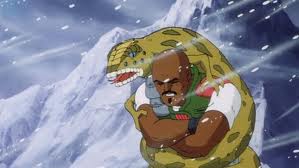 In short, G.I. JOE—THE MOVIE manages to have its cake and eat it too.  The heroes wrap themselves in the vesture of Americanism, though to be sure the JOE ethos celebrates a multicultural America.  Their enemies indirectly suggest the “mysterious East,” but they seem non-ethnic at first glance. Cobra-la itself is one with the bowels of the Earth, prolifically producing monsters as did Greek earth-goddesses like Gaea and Echidna.  The action is always fast and furious; a lot of live-action adventure-films could take a lesson or two from this cartoon.  And though none of the characters possess any depth, the villain Cobra Commander provides some affecting moments.  To avenge his mutation by his masters, he allies himself to the Joe named Roadblock when the latter becomes blinded.  This brings about a strong visual sequence as the snake-man rides the blind Joe’s back, telling him where to go and how to carry vital intelligence back to the good guys. 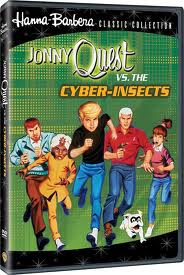 The franchise JONNY QUEST presents a more complicated case, since it went though more iterations.  The original 1964-65 teleseries appeared during what some might call the last “bad old days” of American pulp entertainment, before political correctness took hold in the 1970s.  As I said before, at no time was QUEST specifically about racial concepts as was Fu Manchu.  Rather, QUEST was the embodiment of boys’ adventure fiction.  This meant that the titular hero Jonny and his entourage—father Benton, older companion Race, same-age buddy Hadji and dog Bandit—were forever bouncing around the globe having harrowing exploits in every clime that suggested exotic allure.  Of the four humans in the entourage, only the East Indian boy Hadji was “non-white,” though happily the animators were foresighted enough to make Hadji sound like a real boy rather than exclusively an exotic stereotype.  I don’t know that any societal watchdogs of the period protested when the mostly-white Quest-group had run-ins with marginalized nonwhite peoples in episodes like “Pursuit of the Pohos” or “A Small Matter of Pygmies.”  In that era, the watchdogs were more concerned with the “monkey-see, monkey-do” effects of fictional violence. However, though the original 1960s series remained popular in televised reruns for many years, political correctness made it unlikely for the next two incarnations of the franchise to show new versions of the Quests beating up on pygmies.  The Asian evildoer Doctor Zin, the Quests’ only recurring antagonist— who was essentially the show’s tip of the hat to Fu Manchu—did survive, but as JONNY QUEST VS. THE CYBER INSECTS shows, he did so only in what might considered a “deracinated” form.

CYBER, the last telecartoon produced from the QUEST franchise, takes its cue from the previous teleseries from the 1996 reboot-series, noteworthy for introducing a girl-character to the Quest-team: Race Bannon’s teenaged daughter Jessie.  In contrast to the JOE film, both the animation and the story-pacing of CYBER is sluggish and unremarkable, except for one sequence.  The opening of the telemovie shows Jonny and Hadji dashing pell-mell through a thick jungle, chased by numerous hostile-looking  tribesmen, many of whom wear huge masks suggestive of those worn by native African tribes. The boys dodge their pursuers, clamber past the fence of a deserted village, and try to steal a brilliant sapphire from the hands of a giant pagan idol—

Then the filmmakers—who seem to have had some notion of recreating the “bad old days” of the original series—pull the rug out from under the viewer.  It’s revealed that the suspenseful chase was not a matter of literal peril, but that the two boys were undergoing a test of manhood in accordance with the culture of the tribesmen.  Despite the quasi-African look of the masks, the natives turn out to be an unspecified tribe of South Americans, and the ritual is taking place under the scrutiny of Jonny’s father Benton and guardian Race.

This inversion of old pulp-clichés is not bad in itself.  It’s only bad when it seems forced and obligatory, as I showed earlier in my review of the CONAN THE ADVENTURER cartoon, where a tribe of black African cannibals created by Robert E. Howard are predictably rendered as white guys.  In similar fashion CYBER dispels the boogieman of alleged racism by depicting the tribesmen as predictably wise and beneficent.  However, this is a petty crime next to the film’s rewriting of Jonny Quest, for he fails his trial of manhood due to being an irresponsible hothead. “Classic Jonny” was indeed impulsive, but more often than not, he showed good judgment in perilous situations.

Again, there’s nothing intrinsically wrong with making the hero a “square peg” that must be hammered into society’s round hole for the greater good.  Lt. Falcon in the aforementioned JOE movie gets some modest mileage out of the trope. But as CYBER chugs along—revealing the insidious Doctor Zin’s plan to conquer the world with the help of giant bio-engineered insects— the script doesn’t have Jonny reach his new understanding of “team spirit” with any insight.  He just keeps making impulsive mistakes until at one point, he finally gets it together.  The other characters—who were also simple but vivid types in the classic version—lack any of their old vivacity, with the script giving none of them any new tweaks or developments.

I said that Doctor Zin may have been intentionally “deracinated.”  By that I meant that while his original incarnation is clearly Asian, in CYBER Zin looks like a cadaverous old man, and I'm not sure one would note his Asian heritage if one had never seen the character before.  It occurred to me that it’s a little ironic that in his last (thus far) cartoon appearance, Zin is associated with insect-monsters, much as Fu Manchu was associated with insidious creepy-crawlies like scorpions and centipedes.  However, in contrast to the way G.I. JOE makes occasional references to matters Eastern, there’s no strong evidence that CYBER’s producers had recalled this facet of  “oriental evil,” so it may just be a fortuitous coincidence. 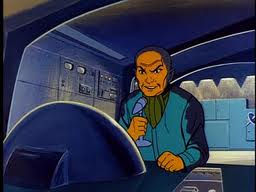 The film ends with Jonny and Hadji finally completing their South American trial by fire, insisting once again on the value of cooperation with mind-numbing insistence.  As a last fillip in the direction of political correctness, though nothing has been said about the trial being a guys-only thing, Jonny invites Jessie to share in the triumph, in order to perpetuate warm fuzzies all around.
Posted by Gene Phillips at 2:05 PM
Email ThisBlogThis!Share to TwitterShare to FacebookShare to Pinterest
Labels: combative adventures, the marvelous