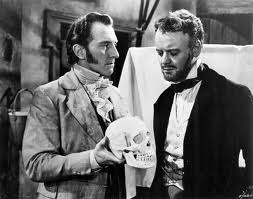 “… we [scientists] quickly tire of our discoveries.  We hand them over to people who are not ready for them—while we go off again into the darkness of ignorance—searching for other discoveries, which will be mishandled in just the same way.”—Doctor Bernstein, courtesy of CURSE scribe Jimmy Sangster.

While Hammer Studio's CURSE OF FRANKENSTEIN happily stays away from updating its mad doctor’s technology with any products of the Atomic Age, it’s hard not to hear in these words a cautionary rebuke to the powers of science, especially at a time when nuclear disaster seemed poised like a Sword of Damocles over all civilization.  It’s probably also no coincidence that “Bernstein” has a nodding resemblance to the name of a man whom many consider the 20th-century’s most famous scientist.


A DVD hype-snippet claims that CURSE is more true to the Mary Shelley novel than the 1931 Universal version.  In reality neither film is particularly close to the novel in terms of its structure or its author’s concerns.  Both the original sound FRANKENSTEIN and CURSE have their enthusiasts. I fall into the camp that finds that the Universal film translated more of the “essence” of the Shelley novel, while the Hammer version is more concerned with using the novel’s base concept as a template for a radically different endeavor.


First and foremost, CURSE is about emphasizing the creation of a new version of Victor Frankenstein, who, as many before me have observed, is the star of the show-- this being in contradistinction to the Universal “Frankenstein” series, where the Monster is usually the narrative focus.  CURSE is built around the formidable acting-abilities of star Peter Cushing, who had some degree of celebrity with British audiences of the time, though it was the Hammer horror-films that made him an international figure.  Co-star Christopher Lee, who essayed the role of the Monster, was elevated to similar status not much later, thanks to his memorable performance as the titular character of DRACULA.  Still, in CURSE OF FRANKENSTEIN Lee’s Monster is always of secondary concern, given that the plot is primarily concerned with the madness and hypocrisy of Baron Frankenstein.


One of the greatest dissimilarities of CURSE to the Shelley novel is one shared by most film-adaptations: that Frankenstein is not the only person privy to the circumstances of his attempt to play God.  In the novel, the scientist suffers paroxyms of guilt at knowing that his creation is killing people right and left, though he’s never guilty enough to admit his transgression publicly.  But the cinematic medium practically begs for other characters to be let in on the monumental transgression, and CURSE is no exception, though this Frankenstein has but one witness to his perfidy: Paul Krempe, an older man who becomes Frankenstein’s tutor when the budding genius is in his teen years.


Sangster’s script shows little interest in the psychology of Baron Frankenstein: we never know just why he wants to create life.  The opening scenes suggest that he’s simply the precocious child of privilege, whose father has been dead ten years at the time young Victor meets Paul.  In addition, Frankenstein’s mother has just perished when Paul first comes to assume his tutorial duties, further suggesting that now young Victor is a child of privilege with no oversight—which, in a Hammer film, is practically a guarantee of disaster.

The relationship of Frankenstein and his tutor begins as something of a Mephistopheles-Faust interaction: Frankenstein convinces the older man to assist him in his experiments, which Paul thinks will be turned to the greater good of man.  He does not see that Baron Frankenstein cares nothing about mankind, not even the humanity of the maid he’s seeing on the side despite having accepted an engagement to his first cousin Elizabeth (Hazel Court).  When Paul finds out that Elizabeth has accepted this engagement, this proves the first wedge between him and Frankenstein, for Paul fancies Elizabeth himself.  He rebukes her for her acceptance of an arranged marriage, but he fails to dissuade her; implicitly, she regards the engagement as a honorable agreement between aristocrats—though there are no indications that she feels anything for Frankenstein but admiration.

Even when Frankenstein announces to Paul his plan to bring life to a composite man made of diverse parts, Paul doesn’t immediately break with the obsessed baron, even when he receives indications that Frankenstein has dealt with bodysnatchers to get the parts he wants.  The break comes when Paul rightly suspects that Frankenstein has killed the revered Doctor Bernstein in order to harvest his brain.  This quarrel effectively rewrites a key scene from the 1931 film, in which the Monster is given an inferior “criminal brain” by an inept servant.  In place of this now risible plotline, Paul and Frankenstein quarrel, and Paul’s violence damages the harvested brain of Bernstein. Frankenstein, unwilling to put off his triumph even for a time, uses the brain on his composite creation anyway.  The result is a ruthless killing machine, but Frankenstein blames Paul for creating the flaw in their collaborative creation—which is presumably the reason that Paul remains silent about its existence.

When the creature first rises from its table—left unattended, as was the Monster in the Shelley novel—it immediately attacks its creator.  Paul managed to bash it unconscious with a chair, but it escapes again, and kills an old blind man—an unsympathetic rewrite of more sentimental scenes in both the novel and the 1935 BRIDE OF FRANKENSTEIN.  Paul and Frankenstein overtake the Monster, and Paul shoots it.  However, Frankenstein resuscitates it without Paul’s knowledge.

In my reading of the novel I harbored the suspicion that many of the people the Monster kills are people that, on some primitive level, Victor Frankenstein resented for one reason or another, so that in a sense the Monster is like an evil doppelganger, doing the things that Victor would not dare attempt.  However, the Frankenstein of CURSE is entirely conscious of using his feral creation to kill people he wants dead.  The maid Justine tells the Baron that she’s going to have his child, and threatens to expose his affair and his experiments to the greater public if he doesn’t marry her.  Frankenstein, who is a ruthless killing machine in his own right, lures her into the laboratory where he keeps the creature confined. After the Monster kills Justine—in a broad sense, replaying the novel-Monster’s transgression upon Frankenstein’s new bride—the Baron covers up Justine’s disappearance.  He continues to plan his marriage to Elizabeth, though he shows no more romantic interest in her than she in him, declining to romance her on the eve of their wedding because he’s busy experimenting with his solo creation—apparently a thing that means far more to him than any mere mortal offspring could.

However, before the wedding takes place, Paul returns to the manor, lured by his passion for Elizabeth.  Frankenstein, like a child still seeking the approval of an elder, can’t resist showing him that the Monster still lives, which results in yet another quarrel.  During this contretemps Elizabeth wanders up to Victor’s forbidden lab, where the Monster breaks its bonds and threatens her.  Frankenstein runs to see what’s going on, while Paul finally decides to expose the situation by running to the village for aid.  In self-defense Frankenstein is forced to shoot his creation, which takes a high fall and plunges into an acid bath that destroys the Monster’s body completely.

Though the conclusion is nothing like anything in the novel, it does get across the novel’s sense of febrile paranoia.  While the latter half of the novel is dominated by Frankenstein’s inability to admit the creature’s existence, the film’s conclusion inverts this.  Having been convicted for murder in the film’s framing-sequence, he tells his entire tale to a priest, and then tries to get the visiting Paul to confirm his story.  But Paul refuses to admit that the creature ever existed, save in Frankenstein’s demented imagination, so that the film ends with Frankenstein about to executed for murder.

The conceit is so well done—especially since Frankenstein really is the proximate cause of Justine’s murder—that one doesn’t stop to worry about how the law found Justine’s body in order to mount a prosecution of the Baron—or even why the Baron would have left a body around for someone to find, since he did have a handy acid bath with which to dispose of a stray corpse.  Surprisingly, Frankenstein does not plead to see Elizabeth, who also knows of the Monster’s existence: in the final scenes we see her with Paul, so she’s obviously decided to remain silent after Paul’s fashion, so that justice will be done and she can now marry the man who really loves her (though there aren’t very many indications that she really loved him).

When I originally saw CURSE, I didn’t care for its less sentimental treatment of the novel’s material, and on balance I still think that the 1931 film is the best adaptation.  However, I now have a greater appreciation of Sangster’s more mordant take on the subject matter.  Though other Frankenstein sequels followed—thus necessitating the Baron’s rescue from the guilloutine—this first film qualifies for the label of an “irony” rarher than a “drama”—since an irony describes a world where there can be no good outcome, except to the extent that the viewer can sit back and appreciate being in on the dark joke of life.

NOTE: I've seen some critics argue that Elizabeth remains ignorant of the monster's existence because she never quite catches sight of the creature before it falls into the acid bath. But this presupposes that somehow Paul is able to gull her with some sort of cock-and-bull story that glosses over Frankenstein's actual crimes-- and I find it really hard to believe that Sangster intended this to be the case.
Posted by Gene Phillips at 2:14 PM
Email ThisBlogThis!Share to TwitterShare to FacebookShare to Pinterest
Labels: the marvelous