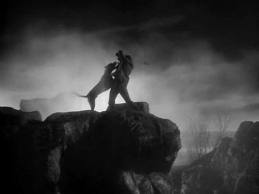 The 1939 HOUND OF THE BASKERVILLES, the first major sound-era Sherlock Holmes film set in the Victorian era, was also the first of two 20th-Century Fox adaptations of the character.  For many, including the fellow playing the Great Detective, HOUND is one of the best of the Sherlock films.  I admire it, but I prefer the second Fox film, THE ADVENTURES OF SHERLOCK HOLMES, which I consider Fox's best contribution to the saga of "Holmes on film."

Since HOUND's complicated plot deals with a hidden villain who plans to kill a man through a deception involving a "demon hound," this places it-- like the original Doyle novel-- in the category of the "phantasmal figuration."  Doyle's novel creates a strong ambivalence as to the existence of the hellish beast, despite the general expectation that no demons will appear in the world of Holmes.  Fox's HOUND-- somewhat stodgily directed by Sidney Lanfield, principally a specialist in comedies before and after HOUND-- doesn't deliver on the novel's spookiness, despite featuring one of the most impressive backlot sets ever, in order to create the atmospheric domain of Dartmoor.

In my review of the 1959 HOUND OF THE BASKERVILLES, I said:


This HOUND was Hammer Films’ only venture into the world of the Great Detective. The film—directed by renowned horror-meister Terence Fisher-- is not as faithful to the novel as the 1939 film from 20th-century Fox, but Fisher’s film manages to sustain its own identity as well as delivering the mythic content of the story.

I still think the 1939 film is closer to the spirit of the original novel, but upon re-screening the Fox version, I have to admit that there are also some sizeable changes here.  In the novel, the character of Beryl is something less than admirable, even though she's been victimized by the principal villain.  The Hammer film makes its version of Beryl an unregenerate accomplice to the main villain-- indeed, visually she's more memorable.  In contrast, the Fox version is totally innocent of any crime, being unaware of her nefarious stepbrother's plans as she engages in a love-affair with Sir Henry Baskerville.  So which version is really closer to Doyle's intent as to Beryl's character?
Similarly, I wrote of one plot-thread in the 1959 film:

The film follows most of the peregrinations of Holmes (Peter Cushing) and Watson (Andre Morrell) as they investigate a wealth of mysterious doings around Baskerville Hall. The only significant deviation from the novel is that early in the film Henry Baskerville is menaced by a tarantula. While I imagine the filmmakers threw in this development to escalate the sense of visible danger, its inclusion telegraphs to the audience the likelihood that a merely mortal villain is behind the skullduggery.

When I wrote that, however, I didn't remember that the Fox film did much the same thing at almost the same point in the film.  Instead of threatening Sir Henry with a tarantuala, the villain-- concealed within a hansom cab-- aims a pistol at Sir Henry and fails to kill him only because Sherlock warns the young lord.  Both early attempts to do away with Sir Henry would seem to run counter to the villain's long plot, to extinguish Henry with a phantom hound; in the novel, the villain makes no such early attempt.  If I had to choose between them, the tarantula-gambit is far preferable.

Overall, despite shortening or eliding scenes from the novel (which nearly every film-adaptation of a novel MUST do), Lanfield keeps the essential elements of the Doyle novel.  As others before me have commented, the final revelation of the phony hellhound is something of a disappointment, but it's true that Doyle's phosphorescent beast may be one easier to suggest on the page than on celluloid. The Fox script actually gets its best spooky moments out of a seance-scene nowhere in the novel, which some later adaptations continued to use.

As I noted above, Basil Rathbone liked his performance in this film better than any of his later takes on Holmes.  I find it just a little too stiff at times, though there are certainly scenes where Rathbone succeeds in humanizing the hyper-intellectual sleuth.  Nigel Bruce gets one of his best outings, since HOUND allows Doctor Watson to play detective on his own for a considerable period.  And of course even in small roles actors like Lionel Atwill and John Carradine are always welcome.

Posted by Gene Phillips at 3:46 PM
Email ThisBlogThis!Share to TwitterShare to FacebookShare to Pinterest
Labels: phantasmal figurations (u), the uncanny