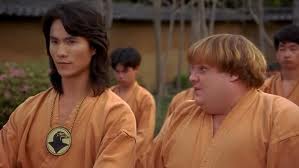 
BEVERLY HILLS NINJA is a formulaic comedy made to showcase the talents of the late Chris Farley.  Farley, despite being a very hefty fellow, was skilled in physical comedy, revealing a certain athleticism not typical of chubby comedians.

Set in contemporary times, NINJA concerns a clan of Japanese ninjas who hold sacred a prophecy of a "Great White Ninja" who will someday come among them.  The clan's sensei adopts into their order a Caucasian foundling, names him Haru and raises Haru as his own son and adoptive brother to his real son Gobei.  Gobei is in all ways a superb ninja, but Haru is maladroit in the extreme, and fails to graduate at the head of his class.

While Haru is alone at the ninja sanctuary, he meets an American woman named Allison, who charms him and involves Haru in her troubles with gangsters.  Haru bids farewell to his adoptive father as he prepares to journey to America to help Allison.  The sensei, justifiably believing that Haru will probably screw up royally, sends Gobei to follow Haru to America and keep him from harm.

Though the slapstick routines are largely predictable, they're reasonably well done, particularly those wherein the superior ninja-brother keeps getting accidentally bashed as he shadows his inept sibling.  There might be a minor element of sibling rivalry in the punishment Gobei takes at the hands of Haru.  The device is somewhat comparable to a similar schtick in BLANKMAN, though in NINJA any aggression is displaced by the fact that Haru is equally clumsy around everyone.

Oddly, the only scenes that mark this martial comedy as "marvelous" are those in which either Haru or Gobei commune with their sensei through some form of astral-travel/telepathy.  I've rarely seen such scenes in Asian ninja movies, but NINJA treats the idea as if it's a standard trope worthy of mocking.  Oddly, I only recall one ninja-movie-- literally of the American-made variety-- which used such a trope, though NINJA at least has enough a budget to make the psychic stuff look marginally credible.

I debated about whether to consider Haru's exploits as a "combative comedy," but decided against it.  Throughout the majority of the film, Haru is unable to harness any of the ninja skills he's studied, and the movie's standout scene may be one in which Nicolette Sheridan (as Allison) punches out a bad guy before Haru can even get warmed up.  There's one scene at the end where Haru finally gets his mojo working in order to save his adoptive brother, so that the film does end up in a big fight between the two brothers and Allison's gangster-enemies.  But the nature of the violence in BEVERLY HILLS NINJA is that of slapstick first and foremost, rather than combining the comedy with the combative, as was done in 1994's BLANKMAN.

ADDENDUM 6-8-17: I've overruled my earlier judgment and now seem NINJA to be just as much a "combative comedy" as BLANKMAN.

Posted by Gene Phillips at 3:42 PM
Email ThisBlogThis!Share to TwitterShare to FacebookShare to Pinterest
Labels: combative comedies, the marvelous