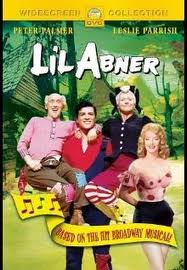 
In this essay for my ARCHETYPAL ARCHIVE blog I examined some of the difficulties in sussing out the phenomenality of the LI'L ABNER comic strip.

The 1959 Paramount film, a close adaptation of the successful 1956 stage musical, displays no such difficulties. One of its primary conceits-- to my knowledge, not derived from the Al Capp comic strip-- attributed the hyper-muscular development of main character Li'l Abner Yokum to a marvelous cause: from childhood his mother "Mammy Yokum" fed him regular doses of "Yokumberry tonic."  Mammy also shows some unusual power for an old lady, but the screenplay doesn't resort to the tonic to explain this phenomenon.  The Yokumberry mixture goes well beyond the limits of any real-world tonic, for one dose can immediately mutate an ordinary-sized man into a muscular colossus.  In addition, the script manages to work in not one but two Capp characters who possess paralyzing powers--: "Evil-Eye" Fleegle, master of the ocular whammy, and Stupefyin' Jones, who can paralyze men simply because she's played by Julie Newmar.

The script for the 1956 musical was written by long-time partners Norman Panama and Melvin Frank, and was substantially unaltered in its adaptation to Paramount's movie version (Frank also directs the movie).  As the story opens most of the inhabitants of the backwoods community of Dogpatch are disporting themselves in cheerful squalor.  The one exception is Daisy May, a beauteous young thing obsessed with snaring hunky Abner Yokum for her own.  Abner repeatedly spurns her, showing all the sex-drive of a nine-year-old. Later his indifference to feminine charms will also be shown to be the result of long exposure to the tonic-- again, not a conceit drawn from Al Capp's strip.

The government comes calling, having decided that Dogpatch is the most worthless piece of real estate in the country, and thus the most desireable site upon which to test the military's atomic bombs.  The hillbillies are initially glad to think of leaving Dogpatch, until they realize that they will not be able to continue their most prized custom. This is Sadie Hawkins Day, a contest wherein any single male must consent to wed any single female who can catch him in a foot-race-- sort of an inverted Atalanta myth.  The script doesn't dwell on how Sadie Hawkins came about, or why everyone, even the men who apparently dread the custom, are horrified to think of being without it.  Still, the threat to Dogpatch's most unique cultural ritual prompts Mammy Yokum to reveal the Yokumberry secret to the government.  The government is naturally interested in a drug capable of transforming men into supermen-- but so is the corrupt industrialist General Bullmoose, who wants to patent the drug for his own profit.

Since Abner is the heir to the Yokum "fortune," Bullmoose undertakes a complicated scheme to obtain the Yokumberry formula.  He rigs Sadie Hawkins Day so that his henchwoman, the suggestively named "Appassionata Von Climax," will marry Abner for his community property-- after which Abner will not enjoy a long marriage. Mammy learns of the dire scheme through her knack for supernatural visions (yet another "marvelous" trope) and sets out to save her son's life. In addition, Abner begins to show some belated concern for Daisy Mae when she's betrothed to marry local lout Earthquake McGoon.

Like most musical comedies, the plot's main concern is the marriage of the hero and the heroine, but LI'L ABNER manages to work in many other seminal Capp characters in addition to those mentioned.  At the very least this wealth of characters makes a fitting tribute to the inventiveness of Capp's imagination.  Some might feel that the film demonstrates less of a penchant for satire than the comic strip, but I've found that throughout the strip's history it too was far stronger on comic than on satirical/ironic elements.  For instance, toward the end of the film the government rejects the use of the Yokumberry tonic when it's found that a side-effect of its enhancement of muscles is that it also kills the sex drive-- which some might deem a satirical jab at the burgeoning "muscle culture" fad of the 1950s. Though the film tosses about some minor comments on the inefficiency of government, the script is incapable of imagining a government that would be evil enough to sacrifice American manhood to gain some advantage during the Cold War.  LI'L ABNER the comic strip also stopped short of depicting the depths of darkness that one sees in the full-fledged ironies of Swift and Kafka.  Thus in this respect the film is on the same aesthetic level as the strip.

The biggest gap between the strip and the film is that the latter isn't particularly funny, even though it borrows many key strip-conceits and even recycles one of Capp's most memorable catchphrases: "What's good for General Bullmoose is good for the country!"  On a tangential note, I'd never refer to the Capp comic strip as "camp," even though Capp used one strategy beloved by the practitioners of camp: having characters say ridiculous things in a straightfaced manner, like Mammy Yokum's famous "Good is better than evil 'cause it's nicer."  However, seeing live actors mouth these sort of farcical lines puts across much the same effect one sees in the 1966-68 BATMAN teleseries, which some view as the first mainstream work to take advantage of the camp sensibility.

The songs are pleasant but generally unmemorable doggerel.  However, the dance choreography, particularly during the Sadie Hawkins Day race, is excellent, very nearly reaching the kinetic heights of better known works of the period like 1954's SEVEN BRIDES FOR SEVEN BROTHERS.

Posted by Gene Phillips at 1:49 PM
Email ThisBlogThis!Share to TwitterShare to FacebookShare to Pinterest
Labels: the marvelous