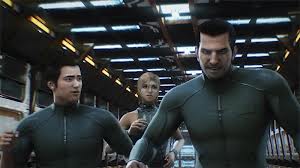 Strangely, though STARSHIP TROOPERS sounds like the title of a pure adventure-opus, neither the original Heinlein novel nor the three live-action films derived from it conform to the tonality of the adventure-story.  Only one derivation known to me, the 1999 ROUGHNECKS: STARSHIP TROOPERS telecartoon, falls into the adventure mythos.  This 2012 direct-to-video release, also animated, can now be added to this short list.

As I said in this review, the original TROOPERS film is certainly constructed as a covert irony.
Following that, as I noted here,the second live-action film in the franchise hewed to a more melodramatic approach, while the third one returned to "a more ironic stance."  STARSHIP 4, however, abandons any ironic or satiric elements, and comes off as a somewhat darker version of the G.I. JOE cartoon-- a similarity that may have been suggested to me by noticing that one of that show's writers, Flint Dille, wrote the screenplay for INVASION.  In truth, I think the characters in G.I. JOE were a tad more individualistic than Dille's versions of such TROOPERS characters as Johnny Rico and Carmen Ibanez.

One of the most un-ironic developments in INVASION is that, during the space-soldiers' battle against their arthropodal adversaries, Rico and Ibanez express negative feelings toward Carl Jenkins, and one of the new protagonists, Henry "Hero" Varro, is put into prison for being insubordinate to Jenkins.  In the original TROOPERS film, none of the Earth-people are in any way aware of the noxiousness of the quasi-fascist things Jenkins says or does.  By making Jenkins a secondary adversary for the "grunts," Dille's script defuses any of his potential for irony.

INVASION boasts some impressive animated effects, particularly for its newly designed insect foes and by improving on the armor-suits seen only briefly in the third live-action film.  However, all of the characters are relatively routine stereotypes, thus reducing the film's ability to compel audience identification. 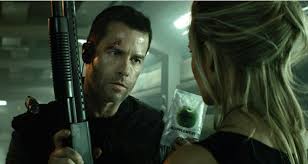 LOCKOUT-- in part scripted by Luc Besson, and directed by the script's other two writers-- is no more original than INVASION, being no more than another take on the plotline of John Carpenter's ESCAPE FROM NEW YORK.  In place of ex-soldier Snake Plissken, we have an ex-CIA man  named "Snow" who is falsely accused of espionage against the U.S.  In place of the government needing to have him venture into the hostile territory of New York, the hero must invade a prison-satellite filled with manicas. In place of Plissken's quarry, the President of the U.S., Snow must seek to rescue the President's daughter-- though something close to this variation had already appeared in a pair of Italian ripoffs of ESCAPE.

However, though there's nothing very impressive about LOCKOUT's plot or action-sequences, the Besson film does put across some entertaining chemistry between Snow-- played by Guy Pearce, not exactly the first actor one picks to be a muscular action-hero-- and the President's daughter, played by feisty Maggie Grace.  Said chemistry comes about largely because Snow, in contrast to many monosyllabic heroes of similar appearance, shows a mocking sense of humor about nearly everything.  Moreover, some of the jokes are actually funny, so that the audience generally wants to see Grace's character get back some of her own.

LOCKOUT could have benefitted from some freakier villains, as the prison-maniacs are fairly uninspired.  But overall, it's a good time-waster.