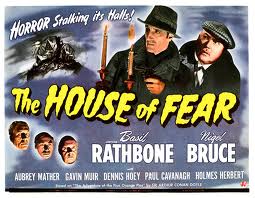 Despite the tag-line in the illo above-- "horror stalking its halls"-- the Sherlock Holmes film HOUSE OF FEAR does not fit my criteria for a horror-film, even to the extent that THE HOUND OF THE BASKERVILLES might.  The "fear" conjured forth by this work is purely naturalistic in nature, as in the fear of an entirely human killer.  Even though FEAR centers upon events in an "old dark house," the film could almost stand as an example of how to make the least spooky "old dark house" film possible, since familiar Holmes director Roy William Neill eschews most of the usual ghostly goings-on.  Even a stern-faced housekeeper doesn't provide any spook-juice.

From the beginning, an earthly motive is suggested.  Seven older men, who occupy Drearcliffe Manor and are insured up to the gills, begin receiving envelopes that suggest that each of them will be assassinated in turn (the story is loosely derived from Conan Doyle's "Five Orange Pips")  Holmes and Watson are brought in to investigate the possibility that one of the men plans to kill all of his comrades in order to reap the insurance rewards.  The big reveal of the culprit(s) was probably a little more original in 1945 than it seems to be today.

Basil Rathbone and Nigel Bruce are always pleasant to watch together in this series.  However, at times the scripts tended to earn cheap laughs at the expense of Watson.  At one point in FEAR, Holmes must leave Drearcliffe at night, and posts Doctor Watson there to watch out for trouble.  The results leave one skeptical of Holmes' good sense, for this Watson, unlike the one created by Conan Doyle, is an inveterate bumbler.  Not only does this Watson fall asleep at his post, but upon being awakened he makes a fool of himself by shooting at a housecat and a suit of armor.  Bruce does the bits well, of course, but by that point in the series such schtick began to seem purely from hunger.
Posted by Gene Phillips at 3:47 PM
Email ThisBlogThis!Share to TwitterShare to FacebookShare to Pinterest
Labels: the naturalistic, weird families and societies (n)