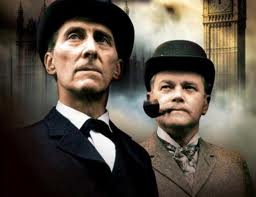 
The six surviving episodes of the 1960s BBC series-- with Peter Cushing as Sherlock Holmes and Nigel Stock as Doctor Watson-- have an assortment of pluses and minuses.

Since these were television episodes, it's inevitable that they all have a rather cut-rate look to them.  Perhaps their most irritating aspect is the directorial overuse of extreme close-ups on the actors' faces.  I've rarely seen even the cheapest television productions use this device quite so much, and it becomes tiring very quickly.

The adaptations of the first two Holmes stories are the worst of the six.  Since both STUDY IN SCARLET and THE SIGN OF FOUR are full novels, they offer considerable difficulties for the producers reducing the stories down to TV episodes.  By accident or design they also manage to exclude elements in each novel that might've proved controversial even in the 1960s, such as the rather disparaging portrayal of Mormons in SCARLET and Watson's inability to propose to a woman who had more money than he did in SIGN.  Indeed, Watson doesn't even propose to the woman in question as he did at the end of SIGN, even when the monetary obstruction is removed; presumably this was eliminated to save time.

However, THE BOSCOMBE VALLEY MYSTERY and THE BLUE CARBUNCLE, both of which were more compact short stories, translate to television much better.  The adaptation of CARBUNCLE is particularly engaging, given that it includes a fair amount of visual humor, particularly in a scene where Holmes tricks a truculent witness into giving up information.

The remaining two episodes provide one of the better adaptations of THE HOUND OF THE BASKERVILLES.  These episodes were the first the BBC filmed with star Cushing, and happily they devoted more time to the classic story.  Indeed, this two-parter recounts more of the original novel's plot than either the 1939 Fox version or the 1959 Hammer Studios version.  In my essay on the earlier film, I noted that the character of Beryl is substantially revised in both films, becoming a total innocent in 1939 and a total villainess in 1959.  These revisions are not necessarily bad in and of themselves.  However, the BBC version, by hewing to the novel, captures an aspect of the book that the films miss, for Beryl's dominance by her husband Stapleton offers an indirect comment upon the evils men perpetrate on women-- a clear parallel to the treatment that Stapleton's ancestor Hugo Baskerville metes out to an innocent farm-girl.  In one scene Stapleton-- who has arranged a pretense of being Beryl's brother-- rages at Henry Baskerville when the young lord courts Beryl.  Of sociological interest is the way Stapleton accuses Henry of the same crime Hugo committed-- of practicing the nobleman's "droit de seigneur."  In truth Stapleton-- described as a physical and moral "throwback" to his ancestor's ways-- is the one with the feudal temperament, since he treats his wife as a slave and toys with another woman's affections so that she will help him set up a victim for a hell-hound execution.

This is not to say that the overall production of the HOUND episodes are sterling: they suffer from the same use of close-ups, and the plotline of Beryl's rebellion is simply dropped when it proves too complicated.  The revelation of the hound is no better or worse than it is in the two movie versions, but the 1965 effort does much better in terms of conjuring up the eerie mystery of the phantom hound, making much use of spectral howls coming from the "heart" of the deadly Grimpen Mire.

Peter Cushing went on record as saying that he felt very constricted by the show's shooting schedule and that he felt he did not give his best possible performances.  I'll raise a dissenting voice in saying that I think he succeeded with Holmes in these extant episodes far more than in the 1959 film or in 1984's SHERLOCK HOLMES AND THE MASKS OF DEATH.  In the extant episodes Cushing does as well as Basil Rathbone at managing to balance his performance between Holmes' super-computer mind and his more human elements.  The character of Doctor Watson is one where many actors have simply relegated themselves to being the helpful sidekick, but I felt Nigel Stock exerted himself to give Watson his own dignity and authority.
Posted by Gene Phillips at 3:01 PM
Email ThisBlogThis!Share to TwitterShare to FacebookShare to Pinterest
Labels: bizarre crimes (n), phantasmal figurations (u), the naturalistic, the uncanny