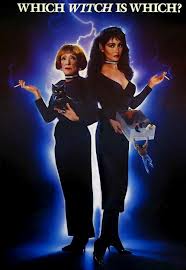 
Though WICKED STEPMOTHER is a massively unfunny fantasy-comedy, I'd still choose to watch it nine times back to back before I'd rewatch a minute of SANDS OF OBLIVION.

STEPMOTHER-- written, directed, and produced by the uneven Larry Cohen-- is less known for its own content than for being the last film of Classic Hollywood legend Bette Davis before she died.  Davis walked off the production, expressing discontent with Cohen's work, though Cohen claimed that she was really motivated by her ill health.  Davis did indeed die a few months later.

Whatever the reasons for Davis' departure, Cohen apparently rewrote the film as best he could to compensate.  Davis' character Miranda is an obnoxious older woman who enters the yuppie Fisher family by marrying the father of wife Jenny (Colleen Camp).  Miranda hits every one of Jenny's buttons-- smoking in her house, bringing a cat into the house despite Jenny's allergies-- long before Jenny has reason to suspect that Miranda isn't just a bitch, but a card-carrying witch.  In addition, Priscilla (Barbara Carrera), Miranda's hot young daughter by another marriage, also insinuates herself into the household and begins making moves on Jenny's husband Steve.

Though the stepdaughter-stepmother conflict is a rich trope going back long before CINDERELLA, Cohen's work in this vein is tediously one-note and fails to delve into potential psychological territory.  Cohen's introduction of Barbara Carrera's character provides a substitute for the absent Bette Davis, since the two are never seen on screen together.  But while it would have been logical to reveal that Miranda simply metamorphosed into Priscilla, Cohen's script takes a more roundabout route, revealing that the two witches (a) are not actually related, and (b) for some obscure reason cannot take human form at the same time, but must alternate in assuming the form of the cat.
This complication doesn't end up having very much effect on the plot as such-- the means of the witches' defeat doesn't have anything to do with their shapechanging abilities-- though it does culminate in one of the film's few eyebrow-raising scenes: when Priscilla, attempting to have sex with Steve, begins to half-transmute back into a cat.

Interestingly, the cat's name is "Pericles," which happens to be the name of a Shakespeare play which includes an evil foster-mother, one incidence of father-daughter incest and the (unrealized) peril that a similar incest may be repeated between the title character and his daughter.

Laugh-free though most of the script is, it does have the minor virtue of including many familiar actors, including Tom Bosley, Lionel Stander, Evelyn Keyes (in one of her last roles as well), and Laurene ("YELLOW HAIR") Landon. 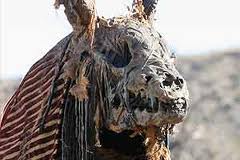 There are familiar faces in SANDS OF OBLIVION as well, such as Morena Baccarin, George Kennedy, and Adam Baldwin.  Unfortunately, SANDS-- one of many tedious TV-films made by SYFY channel back when it was "Sci-Fi"-- gives none of them anything interesting to do.

SANDS is nothing but a bland ripoff of Stephen Sommers' 1999 blockbuster THE MUMMY, right down to being set in the 1920s.  The script's only attempt at originality is that the protagonists who accidentally fall afoul of an ancient Egyptian curse are not a group of archaeologists, but a movie-crew associated with Cecil B. deMille's silent-era filming of THE TEN COMMANDMENTS.  However, the script does nothing to take advantage of this grounding in cinematic history. Aside from getting an actor to play deMille, the movie-shoot might as well have been for a made-up film.  Similarly, though various pseudo-Egyptian demons come to life-- including, of all things, living hieroglyphs that float around like paper cut-outs-- the script shows no insight into the complexities of Egyptian myth and religion.  Even as inaccurate as THE MUMMY is in this regard, it at least tosses together enough superficial research to be moderately convincing to the uninformed.
Posted by Gene Phillips at 3:36 PM
Email ThisBlogThis!Share to TwitterShare to FacebookShare to Pinterest
Labels: the marvelous