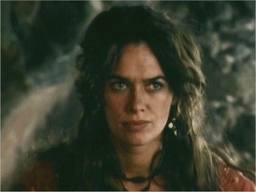 One thing I'll say for Terry Gilliam: he's honest. In his DVD commentary for GRIMM he admits that he didn't like the original script he read before signing on, but that he took the assignment because he was out of work at the time.

There's nothing intrinsically wrong with a filmmaker simply signing on to do a "time-killer" film, which is the highest compliment one can give THE BROTHERS GRIMM.  Gilliam and other hands worked on the script, but however they might have improved it, at heart it's just another "high-concept" film along the line of the "mismatched partners" trope.  GRIMM begins with fictionalizing Jakob and Wilhelm Grimm-- who always call one another "Jake" and "Will," and are played respectively by Heath Ledger and Matt Damon-- so that instead of being scholars of the fairy tale, they're a couple of frauds.  They use their knowledge of folklore to hoax the people of their native Germany into paying the duo to exorcise supernatural threats that the brothers have faked with stage magic.  Of the two, Will is the flamboyant showman, while Jake is the subdued scholarly type whom Will maneuvers into their life of deception.

No sooner does the film set up the brothers' career that the script invokes another famous trope, "the boy who cried wolf."  The Grimms' reputation for ghostbusting becomes so widespread that they're engaged to solve the mystery of disappearing children in the village of Marbaden.  With very little difficulty, the brothers discover that this time the threat is real.  In the neighboring forest they discover a secluded tower, and eventually learn that its inhabitant, "the Mirror Queen," is an immortal sorceress who lost her beauty to disease years ago.  Now she's found a way to restore her good looks by sacrificing twelve young people during an eclipse.  The Grimms are extremely reluctant heroes, but they're continually forced to play hero by other circumstances-- a French occupation-general who wants an end to the commotion, or the beautiful trapper-lady Angelika whose family is distantly involved in the witch's scheme.

This dependence on outside circumstance points out the script's fatal flaw: the protagonists have no real convictions of their own, and so their efforts to be heroic always seem like mere plot-convenience.  Their sibling quarrels are flat and unconvincing, and though the actors present the characters with some charm they aren't able to give the characters any depth.  The script ladles in half a dozen references to fairy tales and similar lore, not all associated with the original Grimms-- "Hansel and Gretel," "Red Riding Hood," "The Gingerbread Man, " "Snow White," "Rapunzel," and "Sleeping Beauty."  But these too have no more resonance than footnotes, and they feel as though in many cases they were chosen as from a grab-bag of fairy-tale references.

Oddly enough, the lead heroine Angelika (Lena Headey) proves far more engaging, both in terms of character and plot, than either the Grimms or their villain, and I suggest that it would have been a better story built around her.  Initially the Grimms seek out this lone trapper-woman because she knows the ways of the forest. Then it's revealed that long ago Angelika's woodsman father told her strange stories of the forest-tower-- and that later, he mysteriously disappeared.  The film ultimately reveals that the Mirror Queen has suborned the woodsman as her enforcer, enchanting him into the form of a werewolf (thus combining two elements of "Red Riding Hood" in one character).  This is the closest that GRIMM gets to the "family romance" of real myth and folklore, for Angelika is the only character who has a truly personal struggle, attempting to win her father away from the influence of an evil old woman-- thus displaying a nodding resemblance to SNOW WHITE AND THE HUNTRESS.  Though the enchanted woodsman almost does sacrifice the life of his daughter for the sorceress, in the end Angelika wins the contest, albeit indirectly, when the woodsman gives up his own life to defeat the Queen.

Though the Brothers do ultimately perform heroic acts, I don't find that they have the attitude I regard as intrinsically heroic, so that I would style both of them as demiheroes.  This technicality alone would not keep GRIMM from being what I style a "combative adventure," but in my system the protagonists also lack the necessary *dynamicity,* so I rate GRIMM as a *subcombative adventure.*

Posted by Gene Phillips at 2:33 PM
Email ThisBlogThis!Share to TwitterShare to FacebookShare to Pinterest
Labels: subcombative adventures, the marvelous