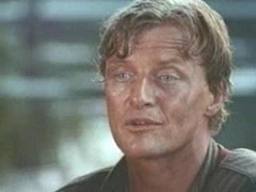 
BLIND FURY is an amiable enough take on the "blind samurai" subgenre initiated by 1962's ZATOICHI.  Rutger Hauer portrays American Nick Parker, blinded by a mortar explosion while serving in Vietnam.  He's taken in by a martial-arts master who not only teaches him how to use his remaining senses to the utmost, he also schools Parker in the ways of the samurai.  Parker-- who conceals his samurai sword within a blind-man's cane-- eventually makes his way back to America and decides to look up Frank Devereaux, one of the men with whom Parker served.

Devereaux, however, has been targeted by the mob, and so has his young son.  Parker happens to be on hand when mobsters break into the home of Devereaux's ex-wife.  Parker can't prevent the wife from being killed, but he resolves to protect the boy and find his friend once more.

FURY is a good basic action-thriller, enhanced by its clever use of "blind martial artist" stunts and a fair amount of humor-- particularly in the relationship between Parker and the young boy, which begins in an adversarial manner.  Both Siskel and Ebert gave the film raves on their old teleseries, appreciating it for its attempt to do something a little more inventive.  However, FURY's basic conflict is still pretty much the same as any other low-budget American-made action-movie of the period.

I do give the film points for not inserting the almost obligatory Love Interest.  There are a couple of times when Parker is called upon to rescue women, but none of the women become an integral part of the story, much less functioning to reward the hero for his nobility.  I don't dislike that fantasy as such, but just for a change, it's nice to see a hero who really just does the right thing for its own sake, and not for the nookie he'll get later.
Posted by Gene Phillips at 3:45 PM
Email ThisBlogThis!Share to TwitterShare to FacebookShare to Pinterest
Labels: combative adventures, superlative skills (u), the uncanny