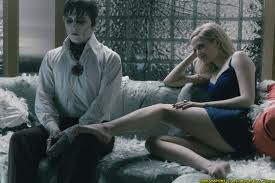 Advertisements for DARK SHADOWS in the summer of 2012 made it look like a "grossout" comedy after the fashion of the SCARY MOVIE franchise.  I suppose it's a small blessing that the world of Collinsport isn't dragged through that sort of muck.  Instead director Tim Burton and his screenwriters seem to be shooting for something in the vein of deadpan absurdity.  If one must make a comic version of the 1966-71 teleseries DARK SHADOWS, this is certainly the better of the two approaches.

However, the movie's still not particularly funny.  Its most enjoyable aspect is the way the script sprinkles in various references to the teleseries, probably as a means of appealing to its fans.  But to those not so initiated, I'm sure that the referential bits will mean nothing.  For instance, the outset of the film somewhat mimics the famous opening of the early episodes, which began with a monologue from viewpoint character Victoria Winters, governess to the Collins family.  When the film's Victoria is seen on her way to Collinwood, she's seen musing to herself.  At first she calls herself by the name "Maggie Evans," and then she devises the name "Victoria Winters" out of whole cloth.  Insiders will know that this is an oblique reference to the exigencies of casting in the teleseries: that when the actress portraying Victoria left the show, another actress, who already played a character called Maggie Evans, stepped in.  Her character then took on the functions of the Winters character.

However, such references never come to anything.  Similarly, Intimations of class conflict arise when the film sets up the main conflict: that the witch Angelique falls in love with Barnabas in the 1600s, only to rejected in part because she's of the servant-class.  But nothing is ever done with this sociological motif.  Indeed, the film DARK SHADOWS reverses the social standing of the Collins family: instead of being a moneyed, venerable family with a thousand strange secrets, they're impoverished aristocrats at the time of the film's main story, the 1970s (just slightly later than the run of the original show).  Perhaps Burton felt that this downfall in the Collins fortunes would make them more sympathetic.  However, they don't remain impoverished long enough to incite any sympathy, because their ancestor Barnabas Collins-- who was changed into a vampire by the vengeful Angelique-- escapes his centuries-long imprisonment and shows up to revivify the family with his hidden wealth.

Angelique is still around too.  She's remained young through her magic and, during Barnabas' long absence, she takes out her fury on the Collins family by undercutting the family business.  Indeed, all other stories in DARK SHADOWS take second place to the conflict between Angelique and Barnabas, a conflict which becomes more physically violent than it ever was in the teleseries, making it an instance of a "combative comedy."  This fragmentation of storylines is not far from what occured when the teleseries' producer Dan Curtis tried to adapt some of the horror-soap opera's meandering plotlines into a "reboot" in the 1970 HOUSE OF DARK SHADOWS. In my review I mentioned that "because the script for HOUSE telescopes many long-running plotlines from the teleseries, the functions of many characters become abridged."  The same phenomenon transpires in this comedy retelling.  The love affair of Barnabas and Victoria-- who is also the reincarnation of Barnabas' love from the 1600s-- is unconvincing, and the very involved plotline about the true nature of young David's mother is tossed in order to justify a last-minute "deus ex machina."  Johnny Depp's Barnabas and Eva Green's Angelique get all the best lines, and talents like Jackie Earle Haley, Chloe Grace Moretz and even Michelle Pfeiffer get pretty much lost in the plot-fog.

If one approaches the 2012 DARK SHADOWS as lightweight, not-too-bright fun, it's pleasant enough.  Just don't expect it to be particularly memorable.

Posted by Gene Phillips at 2:05 PM
Email ThisBlogThis!Share to TwitterShare to FacebookShare to Pinterest
Labels: combative comedies, the marvelous