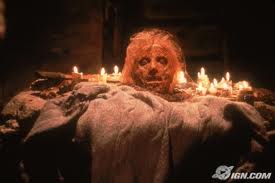 Following the surprise box-office success of FRIDAY THE 13TH, the film's producers had to come up with some way to make a sequel. Their problem was in essence solved by the end sequence of the original film. I noted in my review that the "final girl's" dream-sequence, wherein she was attacked by the corpse of the drowned boy Jason, was almost certainly just the filmmakers' imitation of CARRIE; a last jolt on the thrill-ride.

Since Mrs. Voorhees was definitively decapitated while the audience never actually saw Jason die, a recrudescent Jason was the logical choice.  The idea that Jason somehow survived his drowning and became a "wild man" surviving in the woods around Crystal Lake doesn't line up well with Mrs. Voorhees' rock-solid certainty that her son is dead.  Further, for Part 2 to work, one must presume that not only is Jason alive, he also happens to be watching when his mom gets wacked in Part 1, since he picks up her head, carries it to his isolated shack and makes a shrine of it.

A similar inconsistency appears early in the film, when two counselors in the forest come across the body of a dog that's been torn apart, implicitly because Jason fed on it.  A sheriff shows up right behind them-- and somehow doesn't see the dog's remains.  Later the two counselors conceal the truth from their peers, while the sheriff continues to act as if he never saw the dead dog.

Those points made, consistency is far less important to me than mythopoesis, so I quite enjoy the sight of Jason worshipping at this shrine to maternity while killing off the new arrivals at Camp Crystal Lake.  Part 2 flirts, as did the first film, with the Oedipal currents best articulated in PSYCHO.  Similarly, Part 2's teenage victims--  a new group of camp counselors sent in by some over-optimisitc owner not too concerned by the massacre's bad publicity-- are still relatively realistic despite their simplicity.  However, in order to build up the audience's anticipation of the new menace, the new camp counselors suddenly start talking up the legend of Jason's survival, how he still lives in the forest-- a legend never heard anywhere in FRIDAY PART 1.

To respond to the usual imputations of a "sex vs. death" theme in the FRIDAY series, it's still not as clear here as some critics have insisted.  Indeed, Jason's first two victims are not teens at all.  One is the creepy looking old bike-rider from the first film, and the other is the aforementioned sheriff, who's brought in to establish a suggestion of authority overthrown by Jason's savagery.  Since Jason has no ability to speak-- though he may or may not be a mongoloid idiot as in the first script-- one can't tell if he's entertaining some "repetition-compulsion" involving his failure to save his mother, or if he's just killing randomly, along the line of Michael Myers in HALLOWEEN.

There's definitely a greater attention here than in the first film to supplying set-pieces of slaughter.  It's long been suspected that some or all of the filmmakers had some exposure to translated Italian giallo films, and FRIDAY 2 seems to confirm that, since Jason's most famous kill here-- impaling two lovers with a long spear-- resembles a murder-scene in Mario Bava's 1971 BAY OF BLOOD.  The most interesting psychological angle is that heroine Ginny ruminates over what Jason would be like had he survived his drowning and witnessed his mother's death. Later, when she invades Jason's maternal shrine and Jason overtakes her, Ginny speaks to the killer by speaking as if she were Jason's mother, confusing him long enough that she and one of her friends can retaliate.  This identification between Ginny and Mrs. Voorhees resonates well with the first film's end scene, where heroine Alice imagines Jason as still alive, just as Mrs. Voorhees had.

So Part 2 is relatively coherent in terms of launching a new psycho-franchise.  What about Part 3?

FRIDAY III (available in 3D, though I only watched the 2D version) is the start  of the franchise's long descent into mediocrity.

True, it's in this film that the filmmakers lucked onto the perfect iconic rendition of Jason.  In the previous film he hid his deformed features beneath a cloth bag, but here he hits upon the much more memorable hockey mask, which became his signature image from then on.  At the same time, Part 3 also loses whatever formal interest the other films showed in the  psychology of the psychos involved.  Jason becomes a killing machine, and the teens start getting dumber and hornier.  One of the "teen types" who makes his first appearance in this franchise is that of the "prankster," a character who allows filmmakers to indulge in all manner of "false scares" as a counterpoint to the real perils.  There is also much more talk about sex, and it's tempting to believe that after the filmmakers listened to the distortions of the film's critics, they decided to ratchet up the horniness to greater levels in order to fulfill audience expectations.

Only Chris Higgins, the "final girl" here, has much in the way of backstory.  Since she doesn't have any connection with the bloody camp where both Jason and Mrs. Voorhees conducted their reigns of terror, and since the events of Part 3 take place just a few days after Part 2, the scripters posit that Chris encountered "wild man Jason" in a forest two years previous to the timeline of Part 3.  During that encounter, Jason attacked Chris and tried to carry her away.  But here too the spectre of inconsistency looms, for earlier-Chris loses consciousness and then simply wakes up at home, with no idea how she survived the ordeal.  Presumably the scripters didn't worry too much about that little detail.

Though the victims and their killings become more routinized, the growing conflict between Chris and her monstrous antagonist-- some might say "alter ego"-- remains viscerally strong.  A couple of times Jason comes very close to emulating the feats of his later superhuman persona, particularly when he squeezes a man's skull so hard that the guy's eyes pop out!  Yet, in a conclusion designed to suggest that he really dies this time, Chris finally plants an axe in his skull.  In the movie's final shot he's seen well and truly dead on the ground, suggesting that the filmmakers were ready to call it quits with the franchise at that point. To be sure, Chris hallucinates that he's still alive, and dreams that she's in a boat being attacked by Mrs. Voorhees, but this time these dream-devices seem forced, as if the writers were already running out of ideas.

Posted by Gene Phillips at 3:29 PM
Email ThisBlogThis!Share to TwitterShare to FacebookShare to Pinterest
Labels: perilous psychos (u), the uncanny