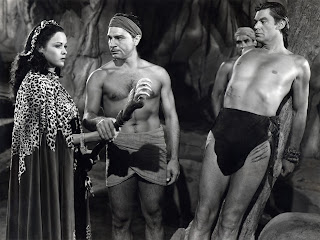 
Coming right on the heels of the superior TARZAN AND THE AMAZONS, this outing, third-to-last in Weismuller's ape-man oeuvre, is a little disappointing.  True, it's fun to see the series get away from variations on the "white-men-seek-elephant's-graveyard" schtick, and to see Tarzan pitted against more "outré" villains than usual.  Indeed, High Priestess Lea (Acquanetta) and her leopard-man cult-- men who dress up in leopard skins and kill their victims with metal claws-- are the most colorful enemies Tarzan ever fights in the Weismuller years.

Still, there was some room for improvement.  This is the one of the few times a Tarzan menace was based on a real phenomenon in African culture-- a leopard-cult that was active from World War I until about two years after this film debuted.  Yet Black Africans are entirely elided from the film, even though there is still an ethnic conflict between the colonial whites and the slightly darker natives of fictional country "Zambesi."  I have not yet catalogued the number of appearance of Black African potrayals in the Tarzan series-- I may give it a try here in future posts-- but I have the impression that many Tarzan films of the period began to avoid showing them.  This may have been a response to negative press re: stereotypical portrayals, though obviously Black Africans did appear later in the Tarzan films of Gordon Scott, Mike Henry, and others.

In any case, the basic conflict is still the colonizers vs. the colonized, and there's a strong ideological bent here to showing the fruits of European civilization as entirely positive.  Near the film's beginning, Tarzan, Jane and Boy visit a village in the Zambesi territory, and all ones sees are schools educating the (darkened Caucasian) kids, prosperous merchants, and exotic entertainers like snake-charmers.  Even Tarzan, who usually badmouths cities and civilization generally, has nothing negative to say about village life.  But there's a snake in this Eden aside from the one in the snake-charmer's basket: Doctor Lazar, a native educated in Europe who secretly wishes to drive out all colonial influences in Zambesi so that his people can return to the ways of war.  To this end Lazar helps Priestess Lea-- whose name is suspiciously akin to that of villainous "Priestess La" in the Burroughs books-- establish her cult. The cult begins by attacking and wiping out a caravan, but the leopard men aren't ready to go public yet, so they make it seem as if the people were wiped out by real leopards.

The local commissioner-- played by Dennis Hoey, reprising his clueless "Inspector Lestrade" role rom the Universal Sherlock Holmes series-- is completely fooled, but Tarzan is not.  "Leopard not use only claws.  Use teeth too."  Unable to do more, he returns to his jungle home with Jane and Boy.

As it happens, conspirators Lea and Lazar-- whose relationship may or may not be romantic-- also have a young boy in their company: Lea's young brother Kimba.  Since Kimba is roughly the same age as Boy, the effect is that of the three being villainous counterparts to Tarzan and his family.  Fittingly, then, Lazar's relationship to Kimba is anything but fatherly: he regards the youth as a pest.  Kimba, wishing to serve his sister, sees Tarzan as a potential threat.  He seeks out the family's jungle home, and, pretending to have been lost in the jungle, plays on their kindness and infiltrates them like a latter-day fifth columnist.

The leopard men become bolder, attacking another caravan in order to abduct its women for sacrifice.  Boy comes across the leopard men's hidden cave and so becomes their target as well, though Tarzan arrives in time to defeat the killers.  Later, Kimba exposes his true villainy to Jane, but Boy arrives to fight his negative counterpart. By the climax Tarzan, Jane and Boy are all captive in the leopard men's cave, awaiting sacrificial execution.  Cheetah-- whose brand of humor is not nearly as intrusive this time-- comes to the rescue, cutting everyone's bonds so that they can escape.  Tarzan ends the leopard cult in true Samsonian style, destroying the cave's supports so that the roof comes crashing down.  The only villains to survive are Lazar and Kimba, and they end up finishing one another off.

This is a rousing if simplistic jungle-adventure, with above-average stuntwork in the leopard-men attacks.  Considering that the film's title places the "Leopard Woman" in the forefront, though, Lea seems curiously without personality, and even Acquanetta's natural beauty doesn't receive a great deal of visual emphasis.

Posted by Gene Phillips at 3:25 PM
Email ThisBlogThis!Share to TwitterShare to FacebookShare to Pinterest
Labels: combative adventures, diabolical devices (u), exotic lands and customs (u), outre outfits (u), superlative skills (u), the uncanny