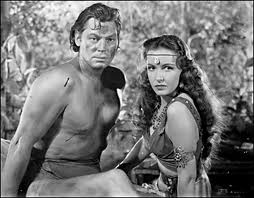 Some reviewers of TARZAN TRIUMPHS didn't care for the ape man getting involved with the still raging events of World War II, but I say: for a pure adventure film nothing works better than kicking Nazi ass.

The arguments of Americans in favor of U.S. isolation from the war went down the tubes the moment Japan bombed Pearl Harbor.  Still, scripter Carroll Young deftly casts Tarzan in the philosophical position of an isolationist so that the film can properly educate him as to the inquity of the Nazi regime.  The approach works, for in the previous MGM films Tarzan's jungle was treated like a paradisical retreat from the evils of humankind.  Now, with the first of the Tarzan films distributed by RKO, Tarzan becomes part of the real world, the hard way-- though to be sure, his "Africa" becomes  inhabited by a species of Arab-Polynesian looking natives.  At least in TRIUMPHS these exotic types inhabit another one of the fantasy-Africa's numberless "lost cities," so they're not represented as Africa's dominant ethnicity.  This lost city is Palandria, to which we're introduced when Boy ventures near it, all insatiable curiosity.  He almost takes a long fall but is saved by a female resident of the city, the lovely Zandra (Frances Gifford).  Tarzan, returning from an errand, shows up and thanks Zandra for her help, and then the two males return home to read the latest letter from Jane.  Apparently since Maureen O'Sullivan chose not to continue in the "Jane" role following the final MGM flick, the producer chose to go Jane-less for this and the next Tarzan he produced.

Unfortunately for Zandra-- whose name sounds not unlike Tarzan's-- a detachment of Nazi soldiers land their plane near Palandria, having somehow discovered that this lost city has a wealth of resources needed for the Reich's war effort.  Initially the Nazis make overtures of friendship to the natives of Palandria, said to be emigrants from another land, though they're still sun-worshippers, much like the Amazons of this later Tarzan-film. Then in short order the well-armed Nazis take over and enslave the populace to harvest the resouces on the Reich's behalf.  Their most visible leader Von Reichart (Stanley Ridges) proves to be as nasty a Nazi as Hollywood's best efforts, and he goes a step further by trying to force Zandra into his bed.

Zandra escapes with some friends, but the Nazis pursue, killing all but Zandra.  She seeks out Tarzan, who drives off the Nazi soldiers.  Then Zandra tries to enlist Tarzan to the cause, but Tarzan believes in minding his own business.  Maybe he thinks he's even with Zandra, having saved her as she saved Boy.  Boy himself encourages action against the new invaders.  In one scene Zandra lures Tarzan into the nearby river for a sensual-looking swim.  Though technically Tarzan doesn't cheat on Jane, it looks a little like she's using this aquatic activity to vamp Tarzan to her side.

Inevitably the Nazis don't leave well enough alone: they attack Tarzan's home again, carrying off Boy.  "Now Tarzan make war," declares the enraged ape man to Zandra.  However, though Tarzan manages to kill off some foot-soldiers, he and Zandra are captured, while Von Reichart boasts about the inevitable triumph of "the strong" (a nice interpolation of Nazi philosophy).  Cheetah comes to the rescue, cutting the trio of heroes free.  Tarzan arms the natives and leads a revolt that kills the Nazi scum, with Tarzan himself taking out Von Reichart in a suspenseful hunt through the jungle.

Most of Cheetah's humor throughout the film is forgettable, but the final joke here-- in which the chimp gets on the radio with the Nazi high command, who mistake his gabblings from those of Hitler-- remains priceless in spite of the corn factor. 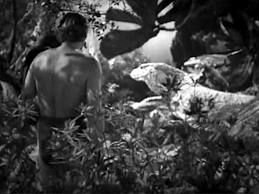 TARZAN'S DESERT MYSTERY finally finds an excuse to avoid African blacks: most of the adventure takes place in a fictional North African community, where everyone appears to be Arabs of some sort, though purely of the "central casting" variety.  This and TRIUMPHS were the only Tarzan films directed by Austrian director William Thiele, and if his mise-en-scene is a little subdued in TRIUMPHS, MYSTERY is a pulp-lover's delight.

As fast-paced as MYSTERY is, the Carroll Young script doesn't neglect some good character moments.  Though Jane is still in England, she sets off the plot-action when she sends a letter via jungle-mail to Tarzan and Boy.  Boy's the only one who can read, so he relates to his adoptive father Jane's message: that she wants him to secure a rare jungle-salve to help the war-effort.  This requires Tarzan to venture into an isolated jungle-region bordering the Sahara and reputedly filled with many strange creatures.  What Boy doesn't tell the ape man is that Jane wants him to stay behind.  Boy fibs, telling Tarzan that he Boy is supposed to go along on the journey.  Tarzan soon figures out the fib, but after remonstrating with the juvenile briefly, does what surely every juvenile viewer wanted and allows his surrogate son to go along.

From there, the action rarely slows down.  We meet itinerant stage magican Connie Boyce (Nancy Kelly), who receives a secret message from a local shiek, a message she's supposed to relay to Prince Selim in a neighboring town.  That town is currently under the dominion of clandestine Nazis Henrdicks and Straeder, who are taking a more subtle approach to exploiting the locals than we see in TRIUMPHS. They currently have Selim buffaloed, but they're anticipating knocking him off.  Later Connie will become their patsy, accused of Selim's death.

I won't detail every fine point of the involved script, but I will draw attention to the way the script creates respect for all forms of life.  Tarzan rescues a wild stallion from the brutal Straeder, and the grateful animal stays with Tarzan, Boy and Cheetah.  Even when Tarzan's party picks up the stranded Connie, she too shows some disrespect for the stallion's dignity by mounting him casually.  After she's bucked to the ground, Tarzan advises, "Next time ask horse."

The marvelous elements show up near the climax: though Tarzan helps Connie escape a public hanging, and will help deliver the news of Selim's murder to the Shiek, he insists on seeking out the weird jungle, with the Nazis in hot pursuit.  The jungle is right out of Skull Island, including not only giant lizards and a giant spider, but also a big man-eating plant.

This is one of the best RKO Tarzan films, with solid action, lively dialogue-- particularly from the smart-mouthed Connie-- and some sprightly comedy, enough that even Cheetah's antics don't prove too cloying.
Posted by Gene Phillips at 3:13 PM
Email ThisBlogThis!Share to TwitterShare to FacebookShare to Pinterest
Labels: exotic lands and customs (u), outre outfits (u), superlative skills (u), the marvelous, the uncanny