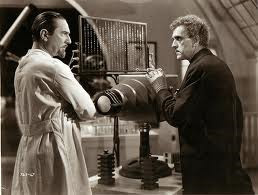 I wasn't terribly fond of THE INVISIBLE RAY-- the next Karloff-Lugosi horror-film to follow the strong performance of THE BLACK CAT and the enjoyable but less stellar RAVEN-- the first time I saw it, and this time around I still see little more than a competent programmer.  Whereas the previous two collaborations found interesting ways to play the stars off one another, RAY's weak script simply focuses on Karloff's character and relegates Lugosi to a minor supporting role that any actor could have played as well.  I have to presume that director Lambert Hillyer could have acquitted himself better with a stronger story, since it was within the same year that he helmed the superior DRACULA'S DAUGHTER.

Further, even though the script focuses primarily on demented scientist Doctor Janos Rukh-- certainly one of the first, if not the first, radioactive menaces in American film-- he remains a very simple stereotype, that of the seeker after strange secrets who neglects his personal relationships.  Credited screenwriter John Colton had just finished contributing to a superior take on this theme, WEREWOLF OF LONDON. But though at times RAY's script gropes to depict the cosmological wonders of the "rays" permeating outer space, the writers fail to translate this wonder into human terms.  Like Glendon in WEREWOLF, Rukh is married to a younger woman.  At first Diane Rukh's motives for wedding the monomaniacal scientist-- with whom she is not genuinely in love-- sound promisingly Oedipal, in that  Diane's late father worked with Rukh as an assistant.  But later in the film it's revealed that Diane simply married Doctor Rukh because her father made her promise to do so.  This device not only sounds like a psychological evasion on the character's part; it also makes her sound like a will-less weakling.  Instead of growing away from her inattentive husband due to an encounter with an old flame, as happens with Glendon's wife in WEREWOLF, Diane simply meets a younger man, one Ronald Drake, and instantly falls for him.  She does resist temptation for a while, but the script avoids dealing with the morality of her situation, which seems surprising given that the Motion Picture Code was particularly powerful during this era.  In addition, Ronald seems to have no qualms at all about pursuing another man's wife, and what characterization he's given makes him sound like a pompous ass.

Doctor Rukh for his part scarcely seems to notice Diane when she's with him.  He's a maverick scientist with no academic affiliations, and he has been broadly criticized by the more well-established authorities.  Rukh reserves his principle passion for the investigation of radiation and radioactive materials, but he lacks any of the relatable human qualities of Glendon the Werewolf.  The only minor exception is his relationship to his mother, a blind woman billed as "Mother Rukh," more on whom later.  The film begins with Rukh inviting his scientific opponents to his observatory to behold a stellar event that will validate his wild theories.  One such opponent is Dr. Benet (Bela Lugosi), and another is the very lordly Sir Francis Stevens. To Rukh's misfortune, Stevens brings along his wife, and she brings along her nephew Ronald.  Thus ironically Rukh's attempt to bolster his reputation among other scientists allows a serpent to enter his domestic garden.

Based on the evidence gleaned from the stellar event, Rukh convinces the scientists to mount an expedition to Africa, to take possession of a fallen meteor containing a hitherto unknown substance, "Radium X."  Once in Africa, Rukh goes off on his obsessed meteor-quest and his wife becomes increasingly estranged from him, not least because Ronald has gone along and the two keep stealing forbidden glances at one another. Diane falls sick and the Europeans take her back to Paris for treatment.  Rukh stays in Africa and harvests the valuable meteor.  However, as if fate wishes to punish him for his unfeeling obsessions, he blunders and exposes himself to the meteor's radiation.  Benet, more cautious, uses the meteor's radiation to cure some of the afflicted natives; an early example of radiation functioning as a wonder-working influence with no side effects.  Rukh begins to glow in the dark and finds that his touch is deadly when he accidentally kills his dog.  Benet attempts to help Rukh treat his illness but warns that the treatment may cause mental instability.

Rukh does make one beneficial use of his discovery, restoring his mother's sight, which was destroyed by one of her husband's radiation experiments.  Yet the doctor grows increasingly paranoid, fearing that the men who once mocked him intend to steal his discoveries.  His mood is not improved by his wife requesting a divorce via mail.  Eventually Rukh's madness drives him to return to Europe, where he begins killing all the scientists who derided him.  This development has potential for tragedy, but none of the scientists, including Benet, rises above the level of a simple stereotypic figure.  Thus I as viewer got neither sadness nor satisfaction from their deaths.  Rukh seeks to culminate his murders with his wife, but his mother forestalls him, and Rukh leaps to his fiery death, thus clearing the way for Ronald and Diane.

Surprisingly, the most layered character here is Mother Rukh.  Though she lives with her son and his wife, and never exchanges a harsh word with Diane, Mother Rukh's opening speeches connote a woman who lives through her son, praising his genius and desiring him to carry on the experiments of his father, even though those experiments blinded her.  On the other hand, she gives with one hand and takes away with the other, direly warning him that he may commit some terrible act of hubris if he takes his scientific investigations into the realm of "secrets we are not meant to probe."  So she both pushes him toward hubris with her praise and then pulls the rug out from under him.  Rukh's ability to heal his mother while he neglects his adult relationship with his wife suggests a man locked in childhood issues, though the script isn't subtle enough to call forth these demons.

I give this film a "fair" rating in mythicity simply it has some symbolic potential, even if that potential doesn't coalesce.  One interesting side-point is the fact that the mad doctor's name, "Rukh," is an alternate spelling-- one known, I believe, even back in 1936-- for the famous gigantic bird of Arabic lore, the Roc.  And though the storied Roc doesn't relate to anything involving stellar radiation or burning powers, one of the colossal avian's mythic relatives, the Phoenix, perishes in the same way Karloff's mad doctor does.  For both of them-- perish in a burst of flame.