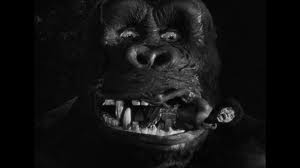 If there's any film that's been analyzed almost as much as the 1960 PSYCHO, it's the 1933 KING KONG.  And since I don't want to repeat the observations of other critics, I'll pass on repeating a lot of familiar thematic statements, some of which prime mover Merian C. Cooper denied during his lifetime.  These statements include such generalities as "King Kong as racial marker," "King Kong as the horrors of sexuality and/or sexual difference," or "King Kong as innocent country-boy devoured by the big city."  All of these have various degrees of application depending on a viewer's own ethos, for Cooper's KONG is the opposite of Hitchcock's PSYCHO in its approach.  Whereas most viewers will agree that there's some intellectual mystery concealed behind the "shower curtain" of Hitchcock, Cooper's KONG, like Cooper himself, seems to deny that it has any meaning beyond being an exciting story.  However, the elements of that story are so intensified, so extravagant in their approach as compared to similar stories-- including 1932's THE MOST DANGEROUS GAME,which shared some of the themes and behind-the-scenes personnel of KONG-- that a film about a giant ape has become a virtual Rorschach test for a great many people.  Kong can be a great number of things to viewers: the Spectre of Blackness Haunting White Europe, Infantilized Sexuality, the Country Mouse-- and yet he's not exclusively any of them.  Even though MOST DANGEROUS GAME shares some of the same structure, a figure like Count Zaroff cannot even touch Kong in terms of symbolic ambivalence.

The one aspect of Kong I can treat with a degree of originality is the mode of the combative, since I myself have originated the theory of that mode.

I've also recently written here about a difference between two types of works:

Works that are "ego-oriented" center upon one or more of the story's viewpoint characters; this narrative focus makes such characters the "focal presences" of their narratives.

And works that are "affect-oriented" center upon a "focal presence" who is someone or some thing observed by the viewpoint characters.

In the essay EGO, MEET AFFECT, I used two Rider Haggard works as examples.  KING SOLOMON'S MINES, which focuses on adventurer Allan Quatermain and his companions, is an "ego-oriented" work.  Haggard's SHE, which uses some of the same plot-elements and character-types as MINES, focuses on She-Who-Must-Be-Obeyed, not the viewpoint characters who observe her majesty.

As it happens, KONG has an antecedent that proves even more influential than MOST DANGEROUS GAME: the 1925 LOST WORLD, on which animator Willis O'Brien perfected his stop-motion wizardry before graduating to KONG.  The original 1912 novel by Conan Doyle is unquestionably an "ego-oriented" work, telling the reader far more about the explorers than the place they explore.  The 1925 film more or less follows the book's example, though it adumbrates some of the strong characterizations of the novel. The film also pays a little more attention than the book to the wonders of the Lost World, particularly to an "ape man" whose principal (and Kong-like) action-- abducting a civilized woman-- does not appear in the Doyle novel.

KONG, however, is definitely "affect-oriented."  Though Denham, Driscoll and Ann Darrow have vital parts to play, they are all supporting roles in Kong's drama.  Kong is the character toward whom everyone else looks, while he himself sees only Ann.  He is, as Denham says, a "god in his world," and he maintains his godhood through his unstinting superiority in combat.  Prior to the great ape's being taken prisoner through human trickery, we see Kong battle and vanquish three prehistoric enemies: a tyrannosaurs, an elasmosaurus, and a pteranodon.  But on an island filled with vicious predators-- so many that one wonders how the local natives have survived, giant wall or not-- it's logical to assume that Kong has had many other such encounters, for all that he seems to be the last of his kind.  One of Kong's most appealing aspects is that though he's not a man, he fights giant beasts just as a man would, punching or wrestling against creatures armed with specialized physical weapons like wings and razor-sharp teeth.

In Kong's world, the men of Denham's party are almost helpless, and Kong massacres the majority of them.  Denham's one technological weapon, a gas-bomb, finally lays Kong low, inspiring Denham to adbuct Kong as Kong abducted Ann-- but for profit, not for love.  To some extent Denham pays for his hubris: Kong can be laid low or killed by human technology, but not-- at least in that era-- bound and put on display.  Even when Kong kills human beings, be they island tribesmen or modern city-dwellers, the ape remains the center of attention.

In many "affect-oriented" works, the viewpoint characters look helplessly on while the "focal presence" of the story works its will, and at best they are only able to slightly alter events.  The aforementioned novel SHE is like this, with the main character accidentally bringing about her own undoing.  Some "affect-oriented" works even offer two focal presences for the price of one, as in Japan's 1962 KING KONG VS. GODZILLA.   The 1933 film takes a more subtle approach: after showing Kong's supremacy in his domain, where he outstrips his prehistoric opponents, it pits him against human technology, the means by which humans sought to equal Nature's gifts to the lower animals.  And Kong, who bested the flying pteranodon, is beaten by the superior fire-power wielded by man's artificial "birds."  Is Kong defeated by beauty alone, or by the (implicitly male) beast in humankind's heart, a beast that female beauty inspires to great acts of valor? 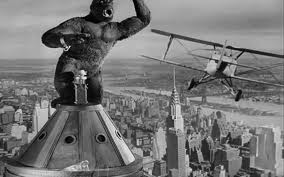 The biplanes are also an insightful touch because the pilots who flew them in World War I became renowned for a knightly code of honor between enemies. In a similar fashion, the entire film is devoted to showing how Kong must be defeated by mankind, and yet how he deserves the respect due a valiant foe. Audiences forget the human beings Kong slaughters and identify with his Herculean feats against the subhuman world of snake, lizard, and bird.  As a fitting ironic touch, the only man who eulogizes Kong in the film is the one who desired to exploit him.  One certainly can't call this love, but it seems that Denham, like the film's audiences, identified with the great ape more than even he expected.

Posted by Gene Phillips at 3:33 PM
Email ThisBlogThis!Share to TwitterShare to FacebookShare to Pinterest
Labels: combative dramas, the marvelous