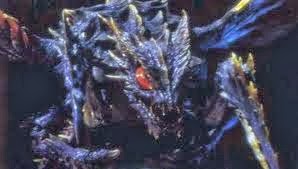 
These two Japanese productions, though separated by ten years and belonging to different SF-subgenres, are essentially one in terms of their theme about obsession.

Though the Big G is the main star of MEGAGUIRUS, his real foe is not so much the giant insect-queen from another dimension, but a mere female human, Kiriko, also a member of Japan's Self Defense Force.  Kiriko, in the tradition of obsessed heroes in all genres, nurses a deep hatred for Godzilla, who during one of his last rampages killed her former commanding officer.  However, since 1996, the year of the monster's last attack, Japan has officially put the kibosh on all nuclear-oriented operations, since atomic energy attracts Godzilla like a flame attracts moths.

Nevertheless, a new project receives governmental approval, one that uses a similar technology, "plasma energy," to create miniature black holes.  The government knows that the plasma-energy will attract Godzilla once more, but they're willing to twist the bear's tail in the belief that they can kill the bear when it comes into reach.

In keeping with frequent series-themes about the abuse of technology, Japan's new black-hole technology creates more problems than it solves, and one of them is an alien dragonfly that slips into Earth-space from another dimension, during a test run of the tech.  While Kiriko and her allies-- her fellow soldiers and a comic inventor who's not very funny-- prepare for Godzilla's inevitable advent, the dragonfly begins to lay eggs.  These produce giant wasp-like creatures, later termed "Meganula."

When Godzilla comes ashore, attracted by the plasma-flame, the Meganula happen to enter the picture, also attracted by the high energy.  The swarm of big insects compromise the Defense Force's attempt to blast Godzilla into another dimension.  When the bugs bug the Big G, he incinerates several of them with his atomic breath.  However, some of the surviving the Meganula manage to feed off Godzilla's powers during their attack.  They fly away and create a new monstrosity with Godzilla's king-sized dimensions, the titular Megaguirus.

The clashes between the big lizard and the big bug are decent, but they have less emotional impact than Kiriko, who "reaps the whirlwind" when she gets her wish about having the chance to tilt with Godzilla again, and sees the cost of the many human beings destroyed by the monstrous rampage-- though in actuality, MEGAGUIRUS does not show this extensive suffering, doubtless to keep the monster-mash from seeming too oppressive.  Further, she learns that one of the politicians engineered the whole megilla in order to make profits from the forbidden technology.  Even after she registers her disapproval by punching the official out, it's implied that she shares some of his guilt.

Though the monster-brawl is at best average, Kiriko's strong personality makes up for a lot. One of the film's highlights shows her climbing onto Godzilla's scales as he swims through the ocean, in order to place a tracking-device on him.  This was director Masaaki Tezuka's first Godzilla film, followed later by two more, both better on the action but still strong with the characterization elements, GODZILLA AGAINST MECHAGODZILLA (2002) and GODZILLA TOKYO SOS (2003).  The score of MEGAGUIRUS manages to emulate the pioneering work of Akira Ifukube and bring its own individual touches to the table. 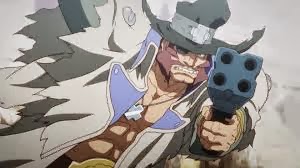 I've never read the TRIGUN manga, but I watched the anime teleseries during its US broadcast. I don't remember the series' hero-- wanted criminal Vash the Stampede-- making quite so much use of the old "I'll pretend to be an innocent goof in order to throw the villains off" schtick.  It's pretty overused in the 90-minute film BADLANDS RUMBLE, though Vash's modus operandi is secondary to his desire to save a young bounty hunter, the beautiful Amelia, from going too far down the revenge-road.  Vash's reasons for stumping around doing good deeds aren't even addressed.


The film begins in Macca City, on a stock desert-planet in some far-future world.  When legendary bandit Gasback attempts to hold up a major banking-institution, Vash intervenes, using his goofus act to de-stabilize the situation, so that Gasback escapes without participating in a major-- and potentially bloody-- shootout with the local authorities.

Twenty years later, Gasback is still uncaptured, and a huge bounty is placed on his head by one of his former business-associates-- Cain Kepler, a fellow thief who "went legit" with his ill-gotten gains and wants Gasback put down.  A huge contingent of bounty hunters converge on Macca City to seek the bounty.  Among them is a young woman named Amelia, and Vash-- who has not aged, for undisclosed reasons-- who takes a protective interest in Amelia, much to her irritation.  Amelia also doesn't care about the bounty: she simply wants to kill Gasback for unspecified reasons.  When Gasback attacks the city with his fellow bandits, most of the bounty hunters have been celebrating too hard to put up any resistance.  Amelia almost gets the chance to kill her quarry, but in doing so she almost destroys the power plant that keeps the whole city alive in the desert.  Worse, Vash is apparently killed by Gasback's men. 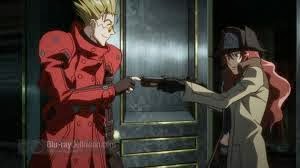 Amelia, though sobered by her own boundary-crossing, resolves to pursue Gasback into the wilderness.  She's joined by Vash's longtime friend Nicholas Wolfwood, who carries around a huge cross which conceals a rapid-fire gun-- a probable tribute to the 1966 spaghetti western DJANGO.  The two of them have a shootout with Gasback's forces, during which Vash the Stampede shows up, revealing how he survived his apparent death.  The conflict concludes with what looks like a spaghetti western's version of a familiar film-trope from Japanese samurai films, which I call the "two swordsmen run parallel to each other while seeking the other's weakpoint" trope.  It doesn't make nearly as much sense when executed by opponents using guns, but it looks cool anyway.  In the end Amelia must choose whether to pursue her revenge or to imitate Vash's preference for sparing lives.

Both the character design and the score are faithful to the 1960s spaghetti-western aesthetic.  RUMBLE is no classic, but it's a better than average space-shoot-'em-up.