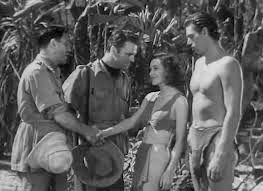 Though TARZAN THE APE MAN catapulted the Tarzan franchise into film immortality, TARZAN AND HIS MATE provided the template for most of the early adventures.

The first film dealt with two white men seeking out the elephants' graveyard in order to make a big score of ivory.  Both men are reasonably upright specimens, but future Tarzan films would deal more heavily with less attractive fortune hunters.  Often such scurrilous villains would attach themselves to safaris led by essentially worthy persons, but the presence of these looters often threw a pall over the alleged good motives of their associates.  The looter in TARZAN AND HIS MATE is a bit more realistic than most of those that followed.  When Arlington arrives in an African port to meet his old friend Holt-- the only survivor of the APE MAN expedition-- it's established that Arlington is a man who had wealth but somehow lost it, and that he's desperate to recoup on this African adventure.  He's also a  roué, given that when Holt meets him on the boat Arlington can't quite conceal that he's had a tryst with a married female passenger, very nearly under the nose of her unsuspecting husband.  Brief though the tryst is, it may be read as an indictment of the corruption of civilization-- an idea that Edgar Rice Burroughs often promoted in the Tarzan books.  The ilicit tryst makes a contrast with the soulful marital bond between Tarzan and Jane.  As yet there's still no mention of a legal marriage between them.

In any case, Holt-- who believes that at the end of the first expedition that Tarzan gave him leave to come back someday and raid the elephants' graveyard-- allies himself to Arlington.  At Holt's request Arlington has brought with him a load of female accoutrements-- dresses, shoes, makeup, perfume-- in the hope of charming Jane, possibly to lure her back to England, definitely to grease the wheels so as to get Tarzan to guide them to their destination.  Arlington observes that Holt is still in love with Jane, but Arlington himself is more of a "player."  When Holt tells him that the natives are dancing to promote fertility, Arlington inquires, "Personal or agricultural?"  Though Arlington isn't as deep-dyed a villain as most of the fortune hunters in later entries, the script skillfully shows that he's a man willing to do anything for his advancement.  This is illustrated by an incident as the safari starts out. One of the bearers decides he wants to leave the safari because of his fears of the taboo territory they're aproaching.  He makes the mistake of waving a spear in a threatening way, and Arlington shoots him dead.  Holt disapproves rather weakly-- "the whip would worked just as well"-- and Arlington does regret his action, since he needs all the bearers he can get, to help carry ivory.


After a grueling trek and a dangerous encounter with local natives, the safari ascends a perilous escarpment, only to be bombared by rocks thrown by killer apes.  Again Tarzan's cry sounds, and the apes disperse.  Tarzan remembers Holt as a friend and accepts Arlington on the same terms.  Jane welcomes both men fulsomely, but like Tarzan she fails to see that both of them regard her with barely concealed lust, and accepts the gifts they bring at face value, taking girlish pleasure in their finery.  She only learns Arlington's real nature when he manages to hang a lip-lock on Jane.  Arlington lucks out in that Tarzan just happens to miss seeing the incident, and Jane, the epitome of the polite hostess, urges that they both forget about it.  At no time do the two adventurers really manage to seduce Jane to their side, though it's true that she has no compunctions about letting them raid the graveyard.


I made the following comment in my review of the first film:

The ethics of raiding the elephants' graveyard only proves dubious a few times in the script, and even Tarzan-- who would become far less permissive in later movies-- doesn't seem to mind Parker and Holt seeking to plunder the remains of his elephant friends. Perhaps Tarzan is a little too besotted with Jane to care much about setting boundaries.


The second film establishes that Tarzan, Adamic innocent that he was, had no idea that the original safari invading his territory meant to plunder the ivory of the elephants' graveyard.  When he does comprehend that Holt has returned with Arlington for that very purpose, the ape-man wants no part of it.  This film, more than its predecessor, comes down on the side of the wilderness against that of progress.  As sympathetic as the audience may be to the impecunious situation of Holt and even to some extent Arlington, they are intruders in Eden.  True, it's a dangerous Eden, where the elegant water ballets of the couple are prone to be interrupted by assorted man-eating predators. But Tarzan's rapport with many of the animals-- he's saved by a friendly hippo at one point-- is clearly an ideal the film places above mere money-making.

When Tarzan refuses his aid, Arlington takes the next step: he shoots an elephant so that the dying beast will lead the safari to the graveyard.  Arlington is saved from Tarzan's wrath by Jane's intervention, and again Holt must dance with the devil that brought him.  However, no sooner does the safari reach the graveyard, than Tarzan shows up with a regiment of elephants, all willing to squash Europeans to preserve their ancestors.  Arlington feigns acquiescence, waits for his chance, and then pot-shots Tarzan from hiding.  Holt sincerely tries to locate Tarzan to help the agonized Jane, while Arlington supplies a cock-and-bull story about the ape-man being eaten by an alligator.  The two men persuade Jane to return to England with them, and she doesn't oppose their taking the ivory because nothing matters to her with Tarzan dead.

Tarzan isn't dead, of course, but before he shows up again the safari is attacked by a murderous horde of natives.  In addition to forcing the safari-members into a "blind alley," the natives show a sadistic edge.  After capturing the safari's headman, they stake him out within the sight of the remaining defenders and call up a pride of lions using special "lion-horns."  To his credit Holt dashes out and tries to free the headman from his bonds, only to lose his life to the lions.  This is certainly one of the few times in 1930s cinema where a white character put his life on the line for a black one, rather than expecting the black character to give his life for his white overlord's benefit.   Arlington is also killed by the lions.  Jane shows considerable wit and fortitude in defending herself from the predators until Tarzan shows up with a troop of elephants and routs both the natives and their leonine allies.  After the triumphant elephants bear their ancestors' remains back to the graveyard, the film ends once more on an image of Tarzan and Jane's union.

Posted by Gene Phillips at 3:38 PM
Email ThisBlogThis!Share to TwitterShare to FacebookShare to Pinterest
Labels: combative adventures, exotic lands and customs (u), outre outfits (u), superlative skills (u), the uncanny