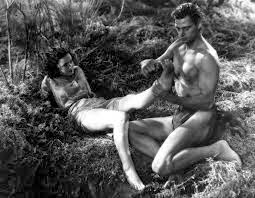 
Though Tarzan had enjoyed a respectable career in silent cinema, none of these early Tarzan films-- in contrast to such deservedly famous silent films like PHANTOM OF THE OPERA, MARK OF ZORRO, and THIEF OF BAGDAD-- had the imaginative impact of sound cinema's first and perhaps best iteration of the "ape man."

I've observed in other reviews that many Tarzan films symbolize a sexual undercurrent via intricate water-ballets between Tarzan and Jane.  But though there is a little water-play between Johnny Weismuller and Maureen O'Sullivan in APE MAN, there's no need to defer anything in this pre-Code picture, for the implication of raw sexuality remains strong in most of their scenes together.  A few years, it would be impossible to imagine the virile but tamed Tarzan on the verge of performing an "innocent rape" upon Jane-- "innocent" because, having an animal mentality, he can't understand why she wouldn't want to have sex.

Jane will never again be as complex as she is here: in contrast to the print version, this Jane journeys to Africa on her own initiative. It's suggested that she has greatly missed her aged father Parker (C. Aubrey Smith)-- implicitly her only remaining parent-- and that she slightly resents him for having remained apart from her for so long, running a crummy trading post and seeking a big ivory score with his young colleague Holt.  Incidentally, Holt is played by Neil Hamilton, who would again end up playing second-fiddle to another mysterious hero over thirty years later.  Since the 1981 TARZAN film made so much of Oedipal currents in the relationship between Jane and her father, it should be noted that yes, Jane does pull off her dress in her father's presence, and joke about how he shouldn't mind since he used to bathe her.  But I don't believe the writers intended this as part of some sexual complex.  The real context would seem to be that Jane, resenting her separation, is teasing him a little with her maturation in order to fluster him and thus have a little power over him.  Old Parker never seems other than paternal toward Jane, though it must be admitted that his death at the film's end does sever Jane's ties with civilization and make it easier for Tarzan to possess his new mate.

The trek of Parker, Jane, Holt and their bearers as they seek the fabled elephants' graveyard remains a high-water mark in adventure-cinema. To be sure, modern audiences will understandably flinch when Holt orders one of the bearers to take a whip to his fellows when they try to run off, but the whipping is not set up as a validation of white imperialism as such.  One might hope that the excitement of the subsequent river-attack-- in which the trekkers try to cross a raging river full of maddened hippos-- overshadows the inevitable deaths of nameless bearers, who would be no less expendable no matter what their race.  The hippos come close to killing the white people too, but are driven away by Tarzan's resounding cry.  It would be interesting to know how often the silent Tarzan was portrayed as wielding such "lord-of-the-jungle" power over animals other than apes or elephants.

The ethics of raiding the elephants' graveyard only proves dubious a few times in the script, and even Tarzan-- who would become far less permissive in later movies-- doesn't seem to mind Parker and Holt seeking to plunder the remains of his elephant friends.  Perhaps Tarzan is a little too besotted with Jane to care much about setting boundaries. Also, after one agonized moment he seems to forget that the white men have killed one of his ape friends.  However, he does suffer a severe wound, making it necessary for Jane to nurse him.  This temporary dimunition of Tarzan's power makes it possible for her to fall in love with the bestial male.

As is so often the case, African natives become the heavies with no acknowledgment of their justification to protect their lands. This time the safari-members are captured by a race of Black African dwarfs with a sacrificial outlook, thus combining both the uncanny trope of "freakish flesh" with that of "exotic lands and customs."   Tarzan liberates the white people with the aid of an elephant-attack, surely the most brutal ever-- another indication of pre-Code laxity.  I'd be curious as to whether the timing was right for 1933's KING KONG to have been influenced by this sequence.

The conclusion, in which Jane remains in the jungle with her lover in unwedded bliss, was corrected by later entries in the series.

Posted by Gene Phillips at 5:50 PM
Email ThisBlogThis!Share to TwitterShare to FacebookShare to Pinterest
Labels: combative adventures, exotic lands and customs (u), freakish flesh (u), outre outfits (u), superlative skills (u), the uncanny