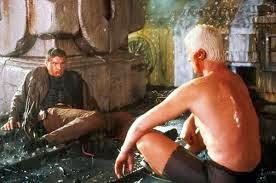 "Quite an experience to live in fear, isn't it? That's what it is to be a slave."

I'll pass over a summation of BLADE RUNNER's plot here for the same reason I did in my reviews of 1960's PSYCHO and 1933's KING KONG: most viewers of metaphenomenal cinema see such cornerstone films early in their viewing-careers, often repeatedly.  In addition, the story remains far more symbolically complex than the vast majority of science fiction films, meaning that such complexity would require more than a blog-review to do it justice.  But I will cover a few aspects of the film in lieu of a more involved undertaking.

The above quote is spoken by Roy Batty (Rutger Hauer), the principal foe of replicant-hunter Rick Deckard (Harrison Ford), but a truncated version of the line is also uttered by another replicant, Leon (Brion James) in a scene where he's about to kill Deckard.  The fact that the line-- which does not appear in the original Philip Dick novel-- was repeated even once demonstrates that it was important to director Ridley Scott and writers Hampton Fancher and David Webb Peoples.  It's possible, in fact, that in the replicants' simple-sounded observation lies a key to the labyrinth of BLADE RUNNER's meanings.

The film, which elevates some of Philip Dick's concerns but subverts or ignores others, weaves together a wealth of motifs, as this entry from Wikipedia mentions:

It is a literate science fiction film, thematically enfolding the philosophy of religion and moral implications of human mastery of genetic engineering in the context of classical Greek drama and hubris.[52] It also draws on Biblical images, such as Noah's flood,[53] and literary sources, such as Frankenstein.[54]

Other religious images include the suggestion of Christ-motifs during the final combat between Batty and Deckard, as seen in (a) a scene in which Batty drives a nail through his own hand, invoking a visual parallel to the image of the Crucifixion, and (b) Batty's death, after which Deckard utters the word "finished," in a clear emulation of the New Testament's phrase "tetelestai."  The superhuman replicants, of course, differ from the sacrificial model of Christianity in that all of them do want the "cup of sacrificial death" to pass from them, although at the very end Batty accepts death's inevitability.  So, given that sacrifice does not have the same redemptive power in the fictional work BLADE RUNNER as it does in a religious context, one may also expect that the film's construction of slavery will also differ strongly from that of the New Testament, particularly as seen in Paul's Epistle to Titus: "Tell slaves to be submissive to their masters and to give satisfaction in every respect; they are not to talk back, not to pilfer, but to show complete and perfect fidelity, so that in everything they may be an ornament to the doctrine of God our Savior."

If anything Roy Batty's acknowledgment of the fear with which real slaves must live resembles philosopher George Hegel's meditations on fear and slavery from his PHENOMENOLOGY OF SPIRIT:

...although the fear of the lord is indeed the beginning of wisdom, consciousness is not therein aware that it is a being-for-self.  Through work, however, the bondsman [Hegel's word for "slave"] becomes conscious of what he truly is.


And later in the same section:

Through this rediscovery of himself by himself, the bondsman realizes that it is precisely in his work wherein he seemed to have only an alienated existence that he acquires a mind of his own... Without the discipline of service and obedience, fear remains at the formal stage, and does not extend to the known real world of existence.


I won't explore the convolutions of Hegel's theories regarding the philosophical meaning of the slave's fear, but whether or not Scott and his collaborators were familiar with Hegel, they parallel Hegel's concepts by showing Roy Batty as entering an exalted state as a result of knowing the truth of death-- and not just in the form of a lord's retaliation for disobedience.  All the replicants of Batty's clan, the "Nexus-6" model, are doomed to live no more than four years whether they obey faithfully or not.  The replicants' human creators, aware of their having endowed their creations with superior physical and mental powers, chose to limit the Nexus-Sixes in this manner, much as Plato's Zeus felt threatened by the powers of early humans and imposed another type of limitation upon them.  Yet even with those limits, the replicants escape the colonies-- where they have served as warriors, assassins, or sex-toys-- and seek freedom by returning the overcrowded "satanic mills" of Earth.

But it's a fool's errand, for Earth offers no escape even for its natives. The movie spends less time than Dick's novel with the future-humans' form of "conspicuous consumption;" purchasing expensive artificial animals. Nevertheless, this pursuit still shows the emptiness at the heart of Earth's humans, their pursuit of chimerical imitations of reality once they've brought about the extermination of most if not all real animals.  Scott's film is more evocative than Dick's novel with regard to the stultifying effect of the police, who exist to rein in the city's crowded citizens. Even blade runner Deckard is forced out of his retired status by the local police to serve their designs.

The darkness of Scott's film comes close to the level I expect from the literary form called "the irony."  Yet I choose to term it a "drama" because it does evince dim hopes for humanity, whether or not one deems Deckard himself to be a human being-- a subject on which various film-creators were themselves divided.  Even though Roy Batty and his replicant friends are unjustly terminated, Batty's transcendent example helps to redeem Deckard, so that he flees the corruption of the city along with the replicant female Rachael.  Deckard has no way to fight the monolithic capitalism that creates genetic wonders to serve as slave-labor; this is no METROPOLIS, where the failures of a system can be mended by a metaphorical union of head, heart, and hands.  But, perhaps in contrast to Paul's Epistle to Philemon, Deckard can and will help a slave to escape the conditions of her servitude.

Scott's use of action-adventure motifs is certainly ironic. Deckard's supervisor calls Deckard a "one-man slaughterhouse," but in all four of the blade runner's encounters with the replicants, they all beat him down and are capable of easily killing him, and Deckard is saved only by contingent circumstances, not by his own skills or powers.  If Deckard himself is some sort of replicant, as Scott argues in his "Final Cut" commentary, he's clearly a model inferior to the Nexus-Sixes-- though even being able to survive the superhumans' attacks may be a clue to the character's own inhumanity.  I for one side with the camp that would prefer Deckard to be a normal human being who parts ways with the injustice his people have imposed on their creations/children: if he is another replicant, then his decision to leave a people who are not really his own resonates less.
Posted by Gene Phillips at 3:07 PM
Email ThisBlogThis!Share to TwitterShare to FacebookShare to Pinterest
Labels: combative dramas, the marvelous