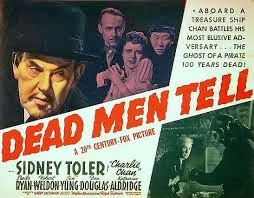 
Though I rate DEAD MEN TELL's mythicity as poor, it's still a moderately entertaining Charlie Chan mystery that serves up the necessary number of red herrings and pseudo-Chinese homilies.  The crimebusting ambitions of Charlie's son Jimmy lead the Oriental sleuth to a ship in a stateside harbor-- possibly New York, where the previous film took place.  Though many Chan films exerted themselves to explain why Chan wasn't in his homeground of Honolulu, TELL doesn't even bother with this detail.

Chan's dense son Jimmy gets the idea that some crime is brewing on the ship, and for once he's right.  The ship's old-lady owner Miss Nodbury relates the legend of the ghostly "Black Hook," the spirit of a pirate-ancestor, who visits his descendants to guide them to the other world.  In short order a spectre in peg-legged pirate-gear visits Mss Nodbury, and she dies of heart failure.  Charlie and his son discover that Nodbury and all the guests aboard the ship planned to journey in search of a fabulous pirate treasure.  She and certain guests shared sections of a treasure map, and now Chan must keep all the would-be seafarers confined to the ship until he can ferret out the ghost-impersonator.

Among the crowd of suspects are two film heroes, George "Superman" Reeves and Kay "Nyoka" Aldridge, but the most interesting character is a neurotic passenger names LaFarge, whose unstable psyche is cared for by a female psychologist.  Skeletal Milton Parsons plays LaFarge with a sepulchral voice and a twitchy personality, making it impossible to know whether or not he's a criminal or just a kook.  As for the mystery, it's serviceable enough, dotting most of the 'i's' as they come along.  Sidney Toler's Chan is a little less paternal toward Jimmy here than in some entries, showing barely any interest when Jimmy tries to show him how he was sapped on the head.  Director Harry Lachman, who had helmed one Oland Chan film and did four with Toler, makes good use of closeups to compensate for the limited sets, and the scene in which the old lady is frightened to death by a hook-handed pirate is a worthy evocation of the uncanny. 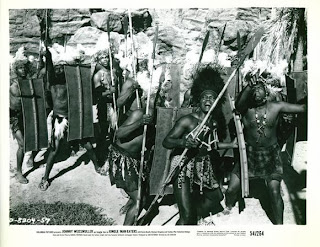 JUNGLE MAN-EATERS is the last, and probably the least, of Columbia's "Jungle Jim" series.  Though Columbia's contract to adapt Jungle Jim ended with this film, the studio simply made three more jungle-films also starring Johnny Weismuller, but billed as "Johnny Weismuller."  The title JUNGLE MAN-EATERS seems to have been dreamed up prior to the script, for though Jungle Jim does fight a lion and a crocodile in his approved post-Tarzan style, no man-eating animals are central to the script.  Jim's foe is Leroux, a greedy white man who colludes with a savage African tribe, the Moros, in order to drive another tribe, the Kazembis, off their land so that Leroux can mine the diamonds on their land.  Jim is brought in by white authorities whose first concern is that no ilicit diamond-trade upsets the European diamond-market, though to be fair these scenes take place prior to the attempt to dispossess the Kazembis.  There's also a new young Kazembi prince whose wife is pregnant with a son, who in turn is cared for by a white doctor-lady.  She in turn has a rather pointless dislike for Jungle Jim, apparently because his chimp gets into her things, though MAN-EATERS doesn't bother with a lot of tiresome chimp-comedy.  All of these elements are simply tossed into the pot and are kept boiling to no particular good effect.  The only interesting scene is one in which the "old order passes," as the good prince of the Kazembis receives a stamp of approval from the colonial white government.  Like most Jungle Jim films, this one is pretty unconflicted about the merits of colonialism.
Posted by Gene Phillips at 2:41 PM
Email ThisBlogThis!Share to TwitterShare to FacebookShare to Pinterest
Labels: exotic lands and customs (n), phantasmal figurations (u), the naturalistic, the uncanny