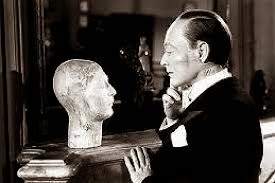 THE FACE BEHIND THE MASK might not be director Robert Florey's best film, but it boasts Florey's most sympathetic protagonist, and one of Peter Lorre's most multidimensional portraits.  Lorre plays Middle European Janos Szabo, who emigrates to America full of new hopes for the future.  He plans to send for his fiancee once he has steady employment, either in his usual trade as a watchmaker or with comparable technical work.  He makes a minor friend in a cop named O'Hara, who, like the audience, is impressed by Szabo's earnest desire to embrace American life.  O'Hara guides him to a cheap flophouse where Szabo can reside while looking for work.  Unfortunately fire breaks out at the hotel.  Szabo is horribly disfigured-- the camera never lets us see his damaged features-- and as a result no one will hire a man with such disfigurement.  Szabo's disillusionment about America is such that he pathetically writes his overseas fiancee a "dear John" letter, claiming to have met someone else, when in fact he's close to starving.

Like the film noirs that would soon dominate the period, MASK comes very close to indicting the American culture's claims to beneficience. For dramatic effect the script gives Szabo no contact with any sources of charity, such as churches, so that his only possible avenue of escape is crime.  He falls in with a friendly if petty crook, one Dinky, who leads him to contact with a gang of thieves.  Szabo does not want to be a criminal, but since legitimate employers turn their faces from him, the world of crime is more than happy to enlist his talents for safecracking and planning crimes.  As a criminal Szabo becomes cold and domineering, wearing a mask to conceal his ruined features and continuing to steal in the hope of buying plastic surgery.  Meanwhile the gang's former leader nurses a desire to kill the man who took over.

Some innocence returns to Szabo's life when he meets beautiful, blind Helen (Evelyn Keyes).  He realizes the emptiness of his criminal life and makes plans to marry Helen and leave it all behind.  But his old gang doesn't accept his resignation, leading to a tragic outcome for all concerned.

MASK's script moves from one catastrophe to the next with ruthless logic, and even though Szabo pays the ultimate price for his criminal dealings, the audience remains sympathetic with him to the last, when he avenges Helen's death in a sort of pyrrhic victory over his fellow crooks.  And though he pays for his crime, it seems hard to see what else this disfigured victim of circumstances could have done differently. 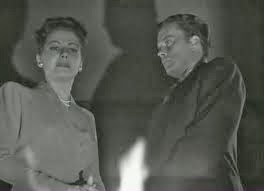 SOUL OF A MONSTER is just the opposite: a preachy set-piece that warns anyone in the audience of the folly of seeking one's own best interests against those of God.  When saintly Doctor Winson lies on his deathbed, his wife Ann succumbs to hubris, claiming that she would sell her soul if the Devil would do what God won't: bring her beloved husband back to life.  Speak of the Devil and up he-- or rather, a servant thereof-- pops.  This servant is Lilyan (read: Lilith), a frosty brunette who comes to supervise Winson's resurrection.

Ann's happiness at her successful devil's bargain doesn't last long.  The resurrected Winson is heartless and soulless, and the script implies that the devil's emissary is there to make sure he spreads more misery upon the earth, as when she incites Winson to commit murder.  This leads to the film's only mythopoeic moment.  Late at night Winson approaches his intended victim, armed with a knife.  The intended, not aware that Winson means him harm, nervously prates about how he wishes there "were no more nights."  While this bit of "light vs. darkness" symbolism is never pursued, it does strike deeper chords than the film's dutiful and very obvious moralizing.  The lucky placement of a crucifix preserves the unwitting fellow's life.

At the eleventh hour, though, the script backs out of the theological dilemna, for it's all been a dream, Winson's deathbed hallucination.  Given that during the hallucination he imagines his tormented wife falling for another man, one has to wonder if all was entirely "Christian" in the Winson household.  Overall SOUL is a bore, aside from the striking visual presentation of Rose Hobart as the devil's sinister emissary.
Posted by Gene Phillips at 11:43 AM
Email ThisBlogThis!Share to TwitterShare to FacebookShare to Pinterest
Labels: delirious dreams and fallacious figments (u), freakish flesh (u), the uncanny