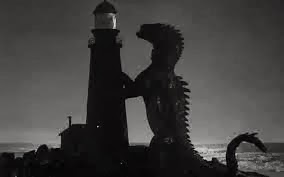 "This is such a strange feeling, I feel as though I'm leaving a world of untold tomorrows for a world of countless yesterdays."-- Professor Elson, about to take a permanent vacation from both work and life.


Given that I recently reviewed the two versions of GODZILLA, I wanted to return to 1953's BEAST FROM 20.000 FATHOMS, the film that allegedly inspired the Japanese work.  BEAST remains justly famed as the first American film to deal with a prehistoric creature dredged out of hibernation by an A-bomb test.

Some critics have assailed the Americanized GODZILLA for supposedly eliding the original film's nuclear message.  However, the adjusted film still communicates the perils of atomic testing.  That's more than BEAST does.  Only at the very beginning does one character, viewpoint figure Professor Nesbitt, express reservations about the atomic project he's working on for the US military, but no one else does.  While Nesbitt and his military liaison Evans are waiting to see the results of their current bomb test in the wilds of the Arctic, Nesbitt's assistant Ritchie cliams that when he initiates a test like this, he feels like he's writing "the first chapter of a new Genesis."  Nesbitt, a rather dour European scientist with an accent (the actor was Swiss), remarks that he just hopes that they won't be writing the last chapter of "the old one."  But neither Ritchie nor the all-business Colonel Evans see any evil portent in their latest experiment, and on the whole the film seems to side with the notion of modern progress against all other considerations, much like the next giant-monster flick for which Ray Harryhausen did the effects, IT CAME FROM BENEATH THE SEA.

The first third of the film recalls the ambivalence of the psychological thriller: while exploring the aftermath of the bomb, both Ritchie and Nesbitt see the Beast.  Ritchie dies in an avalanche caused by the Beast, and none of the level-headed military men believe Nesbitt's wild tale.  Eventually, while he's recovering back in the States, the frustrated scientist is given new hope when he hears about sea-monster attacks on two separate ships.  This leads Nesbitt to seek help from a renowned paleontologist, Professor Elson.  Elson isn't particularly helpful-- he's more concerned with the prospect of taking a vacation for the first time in thirty years-- but his pretty assistant Lee encourages Elson to give Nesbitt, and one of his seafaring witnesses, a fair hearing.

No sooner has Elson agreed to lend his help to Nesbitt than the Beast is sighted at sea again.  Elson volunteers to investigate in a diving bell, and he perishes when the Beast attacks.  In short order the creature invades New York, apparently still hungry from his long sleep, and causes considerable chaos.  When the army manages to wound the Beast, its blood unleashes a deadly disease, so that the military can make no more assaults without releasing the contagion.  Eventually Nesbitt joins his scientific knowledge to the military's martial abilities, and the Beast is killed by sending a radioactive missile into its neck wound.  It dies in the midst of a human amusement park.

The dramatic qualities seen in 1955's IT are much more marginal here.  Nesbitt's frustration over being the Witness No One Believes is underplayed. Assistant Lee is clearly attracted to Nesbitt, and seeks him out even after Elson's initial rejection, but Nesbitt barely remembers her when they meet for the second time.  Romance, so big a part of the IT film, is barely an element here; even Lee's admiring relationship with the professor gets a little more attention.  Lee might also be considered a predecessor to the "female scientific professional" figure common in 1950s creature-features, but though she professes to have a "faith" in science she doesn't make any substantive contributions in that arena. The film boasts a few other iterations of the "tomorrow vs. yesterday" leitmotif seen in Elson's quote above, but they aren't well developed.

Both the film and the original story from which this was adapted were born in part of Harryhausen and Ray Bradbury's love of dinosaurs.  This seems strange to me, for the Beast from 20,000 Fathoms is far from the most impressive monster of this inventive decade.  Indeed, four years later Harryhausen's "Ymir" in 20 MILLION MILES TO EARTH presents a reptilian colossus with considerably more moxie.  The Beast's disease-bearing blood is introduced to keep the army from blowing the monster to bits at the earliest opportunity, and though this development presents a valid enough problem in the suspense department, the contrivance takes away from the Beast's formidability.

Oddly, in one scene a psychiatrist, seeking to discourage Nesbitt by mentioning other fabulous monsters, cites the "Loch Lomond monster," rather than the better known creature of Loch Ness, first reported in 1933.  He also cites the "green snakes of Ireland," which I can only assume is a murky reference to the legend of the Irish saint Patrick, credited with having driven all the snakes out of Old Eire.  Did one of the writers toy with the idea that the defeat of the Beast suggested the same sort of exorcism of the beastly and the primal?  The world will probably never know (or care).
Posted by Gene Phillips at 2:22 PM
Email ThisBlogThis!Share to TwitterShare to FacebookShare to Pinterest
Labels: the marvelous