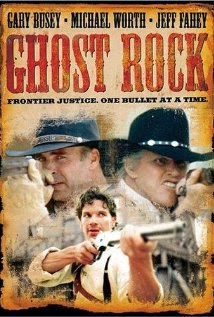 
Any time one looks up an IMDB listing for a given film and finds a martial artist/actor listed as one of the "writers," one should be pretty sure what one is getting.  And sure enough, despite the Old West setting, GHOST ROCK is your basic American chopsocky with minor supernatural content.

In large part GHOST ROCK is cribbed from Clint Eastwood's 1973  "American spaghetti western" HIGH PLAINS DRIFTER.  In that film a man murdered in a corrupt town apparently comes back from the dead to avenge his murder.  Wikipedia claims that the original intent of the script was a naturalistic one, and would have revealed that avenger Eastwood was the twin of the murdered man.  That sensible explanation was dropped, with the result that in the film released the audience never got any rationale for the avenger's appearance.

In contrast, GHOST ROCK provides both a naturalistic and a supernaturalistic avenger.  Twenty years prior to the main body of the story, a gang of outlaws raid a small ranch.  A little girl is killed and the boy who knows her survives to seek vengeance twenty years later in the town of Ghost Rock.  However, for no explicit reason the little girl, grown to womanhood, shows up in town, fully armed and also seeking revenge on the outlaws.  She's literally a ghost, but thanks to budgetary constraints, she never walks through walls, allows bullets to pass through her, or the like.

Naturally there's no telling why it takes both natural-hero John (Michael Worth) and supernatural-heroine Savannah (Jenya Lano) so damn long to find the murderers, particularly when their leader Pickett (Gary Busey) is hiding in plain sight, serving as the mayor of Ghost Rock.  In addition, to make the presence of martial arts in the Old West slightly palatable, Ghost Rock has a substantial Chinese population, who are maltreated by Mayor Pickett and from whom John learned his non-American fighting-skills.  In addition to a second male martial artist who works for Pickett and gives John his best fights, even a couple of local prostitutes show off a couple of kung fu moves.  While no one would ever call the teleseries KUNG FU historically accurate, compared to this rampant silliness it's a veritable model of probity.

Lively gunfights and kung-fu battles make this dumb-fun western watchable but never memorable.  It does try to throw in a little humor, but sometimes the film's jokes are more peculiar than funny, as when saloon-madame Mattie (Adrienne Barbeau, currently pushing seventy years in age) is challenged to knock out a man with one punch, as if this is a common occurence in Ghost Rock's version of the Old West.  A commentary on Barbeau's fame as a "tough girl," or just giving the actress some extraneous "action" to perform to justify purchasing her services to enhance the film's "marquee value?"  On a star-spotting side-note, Worth-- best known to mainstream audiences for the syndie teleseries ACAPULCO HEAT-- is joined here by Christa Sauls, another HEAT veteran.

Posted by Gene Phillips at 5:26 PM
Email ThisBlogThis!Share to TwitterShare to FacebookShare to Pinterest
Labels: combative adventures, the marvelous