The third NIGHTMARE ON ELM STREET-- subtitled DREAM WARRIORS-- abandons the body-possession angle of ELM 2, though arguably some of the sequels will pick up on its idea of the protagonist being in some way consubstantial with Freddy, as opposed to Freddy being the representation of chaos in the protagonist's life.

Wes Craven, billed as one of four scripters on ELM 3, is probably responsible for elaborating the idea of "dream-fighting" suggested in ELM 1, but with greater attention to empowering the film's heroes in the dreams.  Nancy Thompson and her father return from the first film, though oddly the mother, who figured strongly in ELM 1, is barely referenced.  This development also signals the return of Craven's main theme: the inability of adult authorities to listen seriously to their juniors, and their near-fanatical insistence on getting the teens to zone out and "get some sleep"-- which is tantamount to their giving their children over to dream-demon Krueger.

It would appear that Freddy was never particularly interested in seeking out those who actually murdered him. He only killed Marge Thompson after failing to slay Nancy, and for all one can tell he would have left Lieutenant Thompson alone if the cop simply stayed out of Freddy's way.  Like a mythic child-killing demon Freddy was principally interested in "young meat," and so the film establishes that the last remaining offspring of Freddy's murderers are now confined to a mental institution in Springwood.  All of these teens suffer from bad dreams that presage Freddy's return, particularly Kristen.  This young woman has developed a rare ability: in a reversal on Nancy pulling Freddy into the real world in ELM 1, Kristen can pull others into her dreams.  Nancy Thompson arrives at the asylum and immediately recognizes the symptoms of Krueger's attacks, though she has a battle convincing sympathetic psychiatrist Neil Gordon that Krueger is real.  Nancy has no luck whatever with the head of the asylum, who is Craven's usual well-meaning but dense authority-figure.

To be sure, Gordon is swayed by other factors.  Following the death of two of his patients, Gordon receives a visitation from a mysterious nun who tells him Krueger's origin story: that he is "the bastard child of one hundred maniacs," who raped a young nun and impregnated her.  The mystery woman also informs Gordon that Krueger's evil spirit can be laid to rest if he can find Freddy's earthly remains and bury them in consecrated ground.

Thus the battle against the dream-demon takes place on two levels.  Nancy seeks out her estranged father and eventually forces him to show Gordon where the bones were buried.  Meanwhile, Kristen manages to pull Nancy and the other teens into Freddy's dream-world.  However, Nancy is able to advise the teens to assume powers in the dream-world even as Freddy does.  Thus Kirsten and her fellow inmates summon up powers like super-strength, wizardry and the like, though strangely Nancy never does.  Freddy reveals in this film that he gains more power from the teens he slays, whose souls are literally imprisoned in his flesh-- a trope suggested in ELM 1 but not elaborated as it is here. Freddy is defeated, but at the cost of the lives of Nancy and her father.

ELM 3 is the film that established the most-used template of the ELM series, focusing on the persona of the dream-demon who makes bad jokes as he kills people. Chuck Russell and Frank Darabont seem to have been responsible for articulating this persona, as well as the notion of ultimate evil-- Freddy-- being spawned from a force for good: nun Maria Helena, who is not coincidentally gang-raped during the Christmas season.  The FX are excellent but the screenplay does not take advantage of making the dreams truly scary. 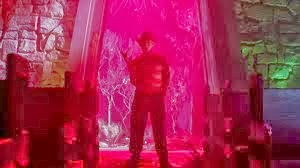 Renny Harlin's sequel, subtitled THE DREAM MASTER, does a far better job in the department of creepy dreams, and even though it has some of the weaknesses of any sequel, I don't blush to state that it's my favorite in the series.  To be sure, it doesn't bother to provide any reason as to why the banishing-ritual ceases to work, and Freddy's mother-- the source of this advice-- is not referenced.

ELM 4 picks up with the former inmates, who have all been released into normal life.  This means that they are back in the care of unthinking parents, though only Kristen's mother is seen for any length of time.  Kristen is once again first to foresee Freddy's imminent return, but this time her ability to pull her friends into the dream-world doesn't pan out so well.  However, the script introduces Rick, a new boyfriend for Kristen, and his sister Alice.  Alice assumes Kristen's role as the central heroine when Kristen buys the farm-- ironically, because her overprotective mother slips Kristen sleeping pills and thereby places her in Freddy's clutches.  Alice is a mousey type who can't even summon the guts to approach her love-interest Dan, though soon enough he too is drawn into the pool of potential victims.

Clearly one of the purposes of this film was to expand Freddy's reach, so that he would not be confined to the children of his murderers. ELM 4 succeeds admirably in this respect, as well as sculpting scenarios that take advantage of dream-illogic-- particularly one in which Alice must watch Krueger destroy one of her friends in their classroom, while the rest of the students remain oblivious of the mayhem.  More importantly, Alice begins to become somewhat like Freddy-- not in the simplistic "Jekyll-Hyde" manner of ELM 2, but in that she too begins to absorb powers from those Freddy kills.  It begins when the soul of the murdered Kristen literally sends energy into Alice, giving her the ability to enter dreams.  After the deaths of friend Shelia and brother Rick, Alice absorbs some of their aspects as well-- all of which leads to a martial confrontation between Alice and Krueger that manages to be thrilling and forbidding at the same time.  Alice turns the souls in Krueger's flesh against him, destroying his dream-body-- at least for the time being. 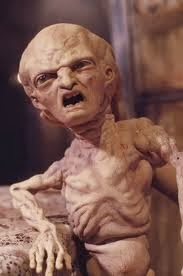 ELM 5, subtitled THE DREAM CHILD, returns to the origin-mythology elaborated in ELM 3, albeit with mixed results.  The level of FX remains the same with director Stephen Hopkins and writer Leslie Bohem, but the story feels far more mechanical, as well as being saddled with what seem like clumsy "pro-life" statements in fantasy-getup.

It's possible that such sociopolitical statements could be intelligently realized elsewhere, but I found such sentiments out of place in the ELM STREET franchise.  The notion of Krueger being spawned in the Christmas season is an incisive twist on the werewolf legend, and it's interesting that the nun who births him is yet another irresponsible parent, putting little Freddy up for adoption and thus indirectly contributing to his corrupted existence.  But Bohem's script takes the opposite tack from Craven's original notion, in that Bohem places greater confidence in the adult authorities-- one of whom is Alice, who learns early on that she is an expectant mother, having been impregnated by Dan before he is killed by Freddy.  In ELM 5's first thirty minutes, we even learn that Alice's hard-drinking father from ELM 4 has cleaned up his act, though this development has absolutely no impact on the plot.

That plot hinges on the notion that because Alice has blocked Freddy from manifesting the way he did before, he can only do so by entering the dreams of her unborn child.  In itself this is a good angle, leading to several scenarios replete with "horrible-child" fantasies. It's even interesting that Bohem implies an equivalence between Freddy's opponent Alice and his mother Maria Helena, for in Alice's first two film-dreams she finds herself in the persona of the nun, first being attacked by the asylum-lunatics and then witnessing the obscene birth of Freddy from his mother.  The latter dream isn't all that logical, though, for why should Freddy want Alice to know that he plans to merge with her unborn infant?  Talk about the villain giving away all his plans to the hero in advance!

The "birth-horror" dream is a hotspot for the "pro-life/pro-choice" tensions, even though no one in the film speaks the word "abortion."  The birth of "baby Freddy" is distorted in the dream, so that the infant looks like adult Freddy rather than a real baby.  This causes one doctor in the dream to claim that the infant should be destroyed, while a female nurse-- also a nun-- asserts that it must be allowed to live because "it is a child of God." Though at the time of this dream Alice does not yet know that she is pregnant, but in essence these contrasting voices speak to her ambivalence as a mother, not just to carrying the reborn Freddy Krueger but any child.  Later in other dreams Alice meets Jacob, a six-year-old who represents what her normal child will be.  In the first dream Jacob does not know that Alice is his mother but he thinks Freddy is his friend; later he clearly understands their relationship and rails against Alice because "you didn't want me!" I realize that I may be accused of reading too much into a fantasy-horror film, but I can't help but see in these sentiments a real-world rejection of "the woman's freedom to choose."

After Freddy kills his first victim-- Dan, who would have been the "daddy" to the vessel of Freddy's rebirth-- he naturally continues to prey on other acquaintances of Alice's.  Only one of these manages to muster a "dream power" like those displayed by the "dream warriors," and he's killed instantly.  Alice never regains her ass-kicking powers from ELM 4, but only defeats the dream-demon with the help of Amanda Krueger's spirit.

Political content aside, there are a couple of interesting myth-motifs here.  One is that when the Amanda-ghost absorbs the Freddy-ghost, she is last seen fighting to keep him inside her, though his claw-hand is seen cutting through her: a motif of "breaking the womb" seen in the Egyptian myth of Set.  Another is the name given to Alice's child, for the name Jacob is sometimes translated to mean "supplanter" in keeping with the role of the Biblical character:

[Jacob] was born holding his twin brother Esau's heel, and his name is explained as meaning "holder of the heel" or "supplanter".

Thus it seems Bohem was aware that Freddy was attempting to be the "supplanter" in relation to the living child Jacob, usurping the child's role as Bible-Jacob usurped the birthright of Esau.  It's a shame that Bohem didn't focus his attention on this aspect of the birth-fantasy, which carries ample ambivalent aspects without the intrusion of personal politics.