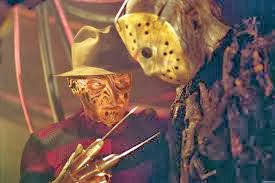 
At present FREDDY VS. JASON appears to be the swan song for both franchises, not including remakes. I personally would not mind seeing their stories end on this apocalyptic note.

In contrast to the HALLOWEEN franchise, which boasted one exceptional film and then descended into general mediocrity, the ELM ST and FRIDAY THE 13TH franchises have an organic feel to them, incorporating new elements as various raconteurs came and went.   Both franchises had their share of bad entries, but even the inferior stories show some appreciation for the mythology created for each monstrous presence.

FREDDY VS. JASON, directed by Hong Kong film-alumnus Ronny Yu, is not long on psychological insight.  Still, the scripters' zeal to give props to both "titans of terror" in their crossover results in some insights into the psychological makeup of the two monsters.

For instance, based on the interaction of Jason and Freddy here, one might characterize them as "the terror of the child" and the "terror of the parent."

Jason, ever since he was promoted to starring monster in the second FRIDAY THE 13TH installment, has been depicted as a literally childlike man who imagines that he is killing for his beloved-- and deceased-- mother.  Freddy, even before he was retconned to make him into a literal parent, was a horror born of the mistakes of Springwood's parents, so that Freddy becomes metaphorically identical with his killers.  Though both Jason and Freddy attack primarily teenagers-- who were of course the target audience in the extra-diegetical real world-- Jason kills them for having failed him when he was a child, giving his murderous rampages the intonation of a child's tantrum.  Freddy kills teens in order to feed upon them, and even to incorporate their souls into his ghostly flesh, a pop-cultural version of Saturn devouring his children. 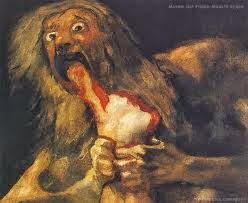 The first half of FREDDY VS. JASON is fairly forgettable, in that most of it is pure set-up. For once the adults of Springwood-- who are no longer seen as inhabiting a childless community, as they were in FREDDY'S DEAD-- come up with an effective, if not especially moral, way of inhibiting Freddy's power.  Using the power of parental censure, they strike the Freddy case from the records and imprison the few kids that remember Krueger to asylums.  Apparently someone among them-- possibly Campbell, father of teenaged Lori-- came to understand that Krueger's power depended on fear, and that he would lose power if people ceased to believe in him.

In his dream -realm Freddy has endured this marginalization for some unspecified time, with no references as to how he came back from FREDDY'S DEAD.  After a long search he discovers his perfect catspaw, the undead Jason Voorhees, currently in a death-like state from his last appearance.  By taking on the image of Jason's beloved mother-- far from the first time Freddy impersonates a parental figure-- the dream-demon impels the hulking Jason to seek out Springwood.  Once Jason arrives, he begins killing at will, and accidentally foments the legend of Freddy once more.  However, once Freddy's fear-based powers have been restored, he wants to be rid of his catspaw-- whom he terms a "bad dog"-- because Jason keeps killing Freddy's victims.  Freddy causes Jason's consciousness-- such as it is-- to enter Freddy's dream-world, where Freddy eventually takes control.  Borrowing a motif from the eighth FRIDAY THE 13TH, evil Krueger even manages to revert Jason back to the helpless child who supposedly died in the first film.  I suppose I would be a dirty spoilsport to remind anyone that the second film establishes that Jason did not originally die in Crystal Lake, though to be sure he does perish in the general area of the lake back in THE FINAL CHAPTER.

A character from POGO once said, "when two dogs fight over a bone, do you ever see the bone fight?"  Here the bone, or bones, in question are the teen denizens of Springwood. Lori gathers about five like-minded teens together in order to ferret the mystery of the twin terrors besieging their city. (These characters are the weakest link in FVJ: in contrast to some characters from both franchises, none of these young'uns are remotely compelling.)  Once Lori's group manages to figure out who's who, and researches their weaknesses, the film finally shifts into overdrive for the last half hour, as the teens take Jason back to Crystal Lake so that he'll have "the home field advantage" in his fight with Freddy.  It more or less works, and for good measure Lori is able to drag a more or less mortal Freddy into the real world, where he and Jason have an epic "claw vs. machete" battle.

Though the all-out, Hong Kong-style action is inventive, what I like even better is that in this incarnation Freddy and Jason become the Dracula and Frankenstein of the eighties and afterward.  Jason is the Monster of Frankenstein, lumbering and pitiless, shrugging off almost every assault via sheer strength and near-invulnerability.  Freddy, as much a shape-shifter as Dracula, proves far more agile and clever about wearing down his brutish foe.  The only minor deficit of the Big Fight is that it doesn't find any way to reflect the monsters' respective parent/child orientations, which is relegated strictly to the set-up portion of the film.

Another neglected notion is that both characters root their monstrous nature in rejection by the normal-- Jason for being a physical freak, Freddy for being "the son of a hundred maniacs."  There's even a sequence in which Freddy probes Jason's mind for weaknesses, and witnesses for himself how young Jason was tormented at camp.  But if Freddy remembers any of his own early torments, he keeps them to himself.

Though the climax allows for potential closure in case one or both monsters never came back within this ongoing series, there's also a coda that plays to those audience-members who want their monsters to be truly undying.
Posted by Gene Phillips at 2:10 PM
Email ThisBlogThis!Share to TwitterShare to FacebookShare to Pinterest
Labels: combative dramas, the marvelous