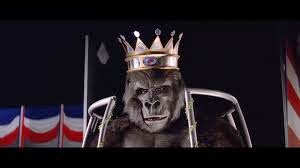 
He was the terror, the mystery of their lives, and the magic. A year from now that will be an island full of burnt-out drunks. When we took Kong we kidnapped their god.-- Jack Prescott, KING KONG, 1976.


Though the '76 KING KONG is riddled with many bad lines of dialogue, the quote above is a happy exception, and may well be the best line ever written by notorious BATMAN-teleseries scribe Lorenzo Semple Jr.  This line sums up a theme that might be listed alongside some of those I listed in my review of the 1933 classic:  White Explorers as Running-Dog Imperialists, stealing the culture of Third World (and often nonwhite) tribal peoples, this time in the form of the natives' violent god.  This theme is not overt in the 1933 film, though arguably it's strongly implicit in the sequel SON OF KONG. In that film Carl Denham's ship is taken over by sailors with Marxist sentiments, but this doesn't stop the entrepreneur from looting an ancient temple on Skull Island and maybe-not-coincidentally witnessing-- albeit not causing-- the destruction of the island and all of its inhabitants.


I'm not saying, though, that Semple's script is deeply concerned with the fate of Third World natives.  The line, spoken by hero Prescott (Jeff Bridges),  may be interpreted as the writer's attempt to derive added pathos from the original film's famous line, "[Kong] was a king and a god in the world he knew, but now he comes to civilization merely a captive - a show to gratify your curiosity." With his "terror and mystery" line, Semple touches on something profound regarding the relationship of divinity and violence in humankind's early religious history.  Not surprisingly, the rest of the script isn't capable of sustaining this insight, so Semple usually falls back on trite attacks aimed at the vulgarity of the movie industry.  This approach is typified by the massively unfunny line spoken by ingénue Dwan (Jessica Lange): 'Did you ever meet anyone before whose life was saved by "Deep Throat"?'

Equally trite-- though probably much more resonant in 1976-- were the script's villainization of the oil industry.  The basic idea is a good update of the entrepreneur-scenario of the original film, in that in 1976 one cannot as easily imagine Carl Denham's daring if unethical "seat-of-his-pants" filmmaker.  In place of Denham we have the colorlessly named "Fred Wilson" (Charles Grodin), who initiates a voyage to a mysterious fog-shrouded island in search of oil reserves.  Grodin gives a fine performance, making Wilson the ultimate corporate finagler looking for a big score, but one who so lacks Denham's courage that he doesn't even want to pose for a photo with Dwan because he's "a married man." By comparison, Prescott is brave at all the right times, but though he's potentially more rounded than Bruce Cabot's Driscoll, Prescott remains a flat-as-cardboard stereotype of a Concerned Environmentalist.  He says all the right lines, yet curiously fails to earn his status as the film's moral center-- perhaps because for a short period, he does sell out and co-operate with Wilson's idea to take Kong captive.  Prescott is at his best when he first stows away aboard Wilson's ship, and intrudes on Wilson's mission-statement to assert that the readings from the island may have been caused not by petroleum deposits but by "animals breathing."  Had the producers wanted to follow the original film in making the island a haven for many prehistoric terrors, this could have supplied an interesting irony, as the seekers of fossil fuels would have been brought into contact with still-living fossils.

Lange's Dwan takes the place of "Ann Darrow," the third principal character who intrudes upon Kong's sanctum.  Perhaps because she is an aspiring starlet, the script does not position her as an innocent, much less a virgin, though strangely her "Deep Throat" line may be the closest she comes to that mythic status. (Dwan ends up on Wilson's ship because she took passage on another ship to audition for a film-role, left a below-decks party in which "Deep Throat" was being screened, and survived the ship's sinking because she was on deck and managed to escape in a lifeboat.)  It seems that the producers wanted Dwan, like Prescott, to be more rounded than the original character from 1933.  Yet Dwan, like Prescott, doesn't always convince one with her character shifts.  Initially terrified of Kong, she gets over her fear a little too fast, as Semple hedges his bets with more goofy lines, as per the famed "You Goddamn chauvinist pig ape!"  Once free of Kong's grasp, she does evince sympathy for the doomed giant, something Wray's Darrow never did. One of the film's best scenes-- a scene without any parallel in the 1933 film-- takes place in the ship's hold, where the drugged Kong has been imprisoned.  Dwan falls into Kong's prison and is saved from death when Kong catches her. His more-than-beast magnanimity-- releasing her when he could have crushed her for her role in his captivity-- so impresses her that at the film's climax she puts aside her glory-seeking ambitions and tries, without success, to save the king from his execution.

But as I said in my first KONG review, these three viewpoint characters are not the center of the film: Kong is.  It almost goes without saying that this Kong lacks the symbolic richness of the original.  To the filmmakers' credit, the references to Kong's animal nature-- as when the sailors debate what the big monkey's going to do with his prize-- don't completely overpower Kong's status as a "terror and mystery." This was a danger, one that arguably was fulfilled by the impoverished script of Peter Jackson's 2005 remake.  As many before me have said, Kong's sympathetic status is enhanced by Rick Baker's lifelike facial masks and his overall performance in the "ape suit," though it's also fair to say that the suit doesn't look too good in long shots.  Director John Guillerman's reshoots of Kong's big battle-scenes, both on the island and in New York, are fair at best, and Kong's one encounter with another dino-critter is tedious.  This Kong isn't allowed to be as gratuitously bloody-handed as the original-- no biting people in half, or dropping them from great heights-- though to be sure Kong still kills a bunch of train-passengers in one of the better-executed scenes.

I viewed the original KONG as a film in the "combative mode." The big ape's triumphs over various monsters on Skull Island were more than just exercises in Willis O'Brien's superb animation skills; they also furnished proof that he was the King of All He Surveyed-- thus making it more pathetic when he falls victim to the power of modern technology.  It's understandable that the 1976 filmmakers had no interest in providing the same number of Kong-dino conflicts, but one consequence is that Kong loses some of his sovereign status.  Also, the script errs by allowing Kong to run loose in the city for a period.  The original wisely realized that Kong's threat would fade once modern weapons, even those of 1933, were wielded against him: his horror proceeds from his erupting on the city-dwellers like a bomb.  By having Kong lurk around in hiding for a time, his menace is dissipated. Something similar occurred in 1998's GODZILLA, and even in 1953's BEAST FROM 20,000 FATHOMS, where the creature's disease-bearing nature insulated the monster from a direct attack.  This delaying action seems predicated on arranging things so that Kong's Last Stand at the World Trade Center can be made moderately logical, and to give Prescott a way to redeem himself for his sins.  But the attempts of Dwan and Prescott to save Kong take away from Kong's status as an icon of power and terror.

I observed in my review that the biplanes of the 1933 film may carry a resonance of "respect for a fallen foe."  From a graphic angle, this film's use of attacking helicopters is a decent compromise, since biplanes would not have been feasible.  But there's no deeper symbolic reading of the 'copters, though the film's attitude toward technology as a whole suggests that Man the Tool-User has won the fight before it even started.  In any case, because Kong's battles on the island and in the city are not central to the theme, this is not a film in the combative mode.

Posted by Gene Phillips at 3:41 PM
Email ThisBlogThis!Share to TwitterShare to FacebookShare to Pinterest
Labels: the marvelous