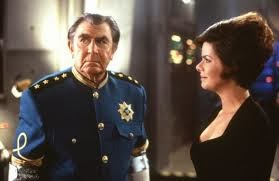 
Though "gross humor" is often derided as an "easy" way for a comedian to get a laugh, in truth it's just as hard to do *good* gross humor as any other kind.

SPY HARD, the earliest of the three I'll review here, is not a particularly good film, but it probably comes closer to its goal than the other two.  Like the ZAZ-team parodies it emulates, SPY HARD takes a scattershot approach to spoofing its subject-- this time the genre of the "superspy film"-- but its best jokes only come up to the level of the Zuckers' lesser ones.  (To be sure, ZAZ didn't do that well with its superspy spoof in TOP SECRET.)

All the expected jokes, particularly the sexual ones, make their usual appearances, particularly in the name of Leslie Nielsen's bumbling spy, "Dick Steele," aka "Agent WD-40."  Nielsen's character is indistinguishable from his Frank Drebbin character of the NAKED GUN films and teleseries, so it's not surprising that the villain steals the show.  Andy Griffith plays the evil genius General Rancor, who gets all the mileage he can out of being a spoof of James Bond's "Doctor No."  Where No merely lost one hand, Rancor lost both arms due to Dick Steele, and tends to lose his substitute robot arms at the drop of, well, an arm. Best Rancor joke: Steele greets him by saying, "I'd shake your hand, but I don't remember where I left it."

Aside from Griffith, SPY HARD's main asset is that, like the better Bond films, it supplies an ample quantity of sexy women, including Nicolette Sheridan, Stephanie Romanov, and Marcia Gay Harden, most accompanied by goofy names of the "Pussy Galore" variety.  The gross humor is applied with a light touch, which puts the film a little ahead of the second two AUSTIN POWERS films.  The script is partly credited to the Friedberg-Seltzer writing-team, who have become infamous for a spate of lame, unfocused gross-humor spoofs whose titles are always some version of "[fill in the blank] MOVIE."  These films, which are almost uniformly awful, have earned the scorn by many film-fans, but detractors of F&S may be surprised to find that SPY HARD sticks pretty close to the subject of Bond-spoofery rather than wandering into a host of irrelevant pop-culture venues, as the "MOVIES" do.  However, SPY HARD does take a shot at HOME ALONE for no good reason.

I was largely bored when I watched YOUR HIGHNESS in the theater, but I decided to give it a second try. I still didn't like the film's attempt to package American comedian Danny McBride along the lines of a new Jack Black, this time in an otherworldly D&D fantasy where everyone, particularly McBride's character, finds themselves unable to pass even a few moments without a reference to cocks, pussies, or someone or other being "gay."  I should note that, in the interests of political correctness, the one really gay villain is treated with a dollop of compassion.  The plot involves Thadeous getting dragged along when an evil wizard kidnaps Fabious' fiancée, but eventually finding his own brand of heroism-- as well as forming a booty-call relationship with tough lady warrior Isabel (Natalie Portman).

On my second viewing I did think that there was some potential in the set-up: perennial screw-up Prince Thadeous (McBride) nurses a resentment of his near-perfect brother Fabious (James Franco) because Fabious is automatically guaranteed to become king, insuring that everyone's always sucking up to Fabious.  (The thought that Thadeous would still be in line for the kingship if Fabious kicked off doesn't occur to anyone in the kingdom.)  So Thadeous' horndog nature could be seen as overcompensation for being constantly downgraded.  The script's intelligent enough to put this much psychological insight out there, which is more than most "gross humor" films even attempt.  But the writers-- who seem to understand the dynamics of high fantasy fairly well-- don't really want to poke any holes in the image of Fabious' perfect hero-prince, so there's not really anywhere for the story to go except for Thadeous to get over his sibling-envy and "man up." The fight-scenes and the FX-- particularly the five-headed dragon seen above-- impressed me more than a number of more expensive fantasy-flicks of recent years, particularly the recent I, FRANKENSTEIN.  The perfect blend of "high fantasy" and "low humor" still has yet to be made, though. 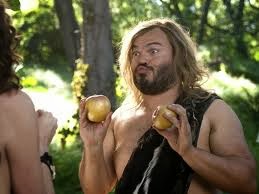 As of this writing YEAR ONE is the most recent outing for Harold Ramis as director.  Though most celebrated as a writer, Ramis also directed a number of good comedy-films, including CADDYSHACK and GROUNDHOG DAY.  The decade of the 2000s wasn't so fortunate for director Ramis, starting out with the dismal remake BEDAZZLED (2000) and ending with this film.  In YEAR ONE Jack Black and Michael Cena play two dumb cavemen, "Zed" and "Oh," who wander out of their enclosed valley into the world of the Old Testament.  They encounter figures who are wildly separated from one another by the Bible's version of history, meeting first Cain and Abel, then Abraham, Isaac, and the city of Sodom.  For good measure, Sodom's reigning princess has been given the non-Biblical name "Inanna" (original name for the goddess best known as "Ishtar").  Some of the cavepeople from the tribe of the two dummies also get taken as slaves in Sodom, and two of them are women coveted by the doltish cavemen.

Black and Cena deliver as much moxie as they can playing a sort of reverse Laurel-and-Hardy-- that is, a team in which the passive member of the team keeps getting screwed over by the bullshittery of his more aggressive buddy.  The jokes, though, are even more unfunny and repetitive than those in YOUR HIGHNESS, and on top of that they feel forced, as if Ramis was just delivering the goods he thought the audience would want.

What's most interesting about the script is what it doesn't do: no mingling of the fantasy-material often found in both the caveman-genre and "the Bible film."  As I've observed elsewhere, most cavemen films can't resist tossing in dinosaurs.  Such movies attain an "uncanny" status given that they're producing an altered version of real history, not positing the dinos as an intrusion of the marvelous upon the commonplace world.  YEAR ONE, though, isn't mixing dinos with cavemen, but cavemen with Biblical priests and patriarchs.  I suppose I should also judge YEAR ONE as "uncanny" on the same basis, given that historical periods are lumped together in the same cavalier fashion as the cavemen/dino flicks.

The film also avoids any hint of supernatural phenomena, whether on the side of God or his various competitors.  With this elision Ramis, one of three writers of YEAR's script, is certainly meant to undermine Hollywood's history to validate Biblical history, including the Bible's version of deity.  Zed trespasses on the "forbidden fruit" of a "tree of knowledge" in his secluded valley, but it's really just a fruit, so that Zed gains no knowledge by eating it. A snake does show up, but it doesn't tempt or talk to anyone; it just tries to strangle Oh.  The encounters with Cain and Abraham also suggest that God isn't really sending down any commandments to anyone, and though Zed tries to convince others-- and himself-- that he is God's chosen one, he ends the film by exhorting the natives of Sodom-- whom God never gets round to destroying-- to put an end to all such superstitions.  But YEAR ONE is no LIFE OF BRIAN, which managed to make its raunchy moments work in the context of genuine satire.  The most one can say is that thanks to the stars it's a little more entertaining than BEDAZZLED.

ADDENDUM: SPY HARD and YOUR HIGHNESS both qualify as "combative comedies," but YEAR ONE is merely punctuated by unfocused bouts of slapstick fighting, and so remains subcombative.

Posted by Gene Phillips at 3:16 PM
Email ThisBlogThis!Share to TwitterShare to FacebookShare to Pinterest
Labels: combative comedies, exotic lands and customs (u), the marvelous, the uncanny