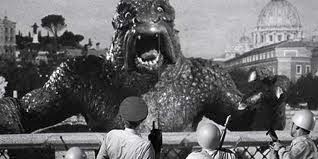 
As all monster-film fans know, FX-genius Ray Harryhausen was inspired to enter his profession by his viewings of 1933's KING KONG.  His enthusiasm for the art of stop-motion later led to his collaboration with KONG's prime mover Willis O'Brien on 1949's MIGHTY JOE YOUNG.  In the decade of the 1950s Harryhausen's star rose alongside the prominence of science fiction films, as he made his name with giant monster-films like THE BEAST FROM 20,000 FATHOMS  and  IT CAME FROM BENEATH THE SEA, as well as the alien-invasion flick EARTH VS. THE FLYING SAUCERS.  20 MILLION MILES TO EARTH is his last giant-monster film of the 1950s.  With one exception-- 1969's THE VALLEY OF GWANGI-- all of Harryhausen's completed works in later decades situated his stop-motion horrors in otherworldly scenarios-- either those of science fiction, fantasy, or that strange generic breed, the "caveman-and-dinosaur" film.

Did Harryhausen ever want to make a monster that audiences loved as they loved Willis O'Brien's KING KONG? It may be that he was too respectful of O'Brien's accomplishment to wish to copy it directly, or even to do a knockoff, as O'Brien essentially did with both THE SON OF KONG and MIGHTY JOE YOUNG.  20 MILLION, unlike the previous two giant-monster movies, features a monster with a roughly humanoid appearance. Arguably 20 MILLION had more potential to evoke KONG-like emotions than a giant dinosaur or a giant octopus.  The creature, whom Harryhausen dubbed the "Ymir" though it's never given a name in the film, displays a good range of expression in addition to its humanoid appearance, and I mentioned in my review of BEAST that I found Ymir possessed  superior "moxie."  Yet the script for 20 MILLION, one accepted by both Harryhausen and producer Charles Schneer, makes almost no attempts to mine the Ymir's Kong-like potential.  Thus it's possible that Harryhausen primarily cared about the Ymir as a technical, not a dramatic, challenge.

The title refers to the origins of the monster on the planet Venus. It's possible that the title may also be a shout-out to Harryhausen's first giant-monster flick, as well as a reference to the roughly similar titled of Jules Verne's most famous book, 20,000 LEAGUES UNDER THE SEA.  This reference becomes explicit at the film's opening, for when a manned rocket returns to Earth from its Venus mission and plummets into the sea, one military character remarks that the vessel is now "20,000 leagues under the sea"-- presumably a measure of depth, rather than the distance-connotation of Verne's title. A brief introduction links man's mastery of space-travel and atomic science, even though 20 MILLION has nothing whatever to do with the usual tropes of "atomic bomb cinema"-- unless you count the fact that the film takes place in a postwar world dominated by America because the U.S. was first to master the atom. Possibly the scripters tossed out the atomic-power reference to make it credible to 1957 audiences that the US government would soon be able to send rockets to Venus just as rapidly as the atom had been split.

Some Sicilian fishermen witness the splashdown and rescue two members of the Venus expedition.  Of the two, the older astronaut perishes of a Venusian disease that has already slain the other members of the expedition.  Only young leading-man astronaut Bob Calder survives, apparently having avoided contamination on the flight back-- though both he and the attending doctor take absolutely no precautions to avoid contact with the dying astronaut.  The doctor-- also, as in many 1950s films, the leading man's love-interest-- is actually a doctor-in-training: one Marisa Leonardo, the American granddaughter of a local Italian medical man.  Sparks fly between Calder and Marisa the same way they did between the leads of IT CAME FROM BENEATH THE SEA, but their dialogue is less memorable and the leads lack charisma.

A third survivor of the flight is the egg of the Ymir, encased in a glass cylinder by the astronauts.  The cylinder is cast out of the rocket during its fall and is found by a relentlessly cute little Italian boy, Pepe.  The boy, a devout lover of all things American, sells the container to Doctor Leonardo so that Pepe can purchase a cowboy hat.  The other Italian characters are generally deferential to the American military, except at one point where an Italian policeman puts his people's survival ahead of American interests. From this film one would never know that the two countries had been opponents during a world war.

Leonardo opens the container and finds a jelly-like substance that he leaves sitting out on a table (some scientist!).  Shortly later, he and his granddaughter discover that the "egg" has hatched into a small reptilian humanoid.  They put the creature in a cage, but Ymir shows a distressing tendency to grow at a rapid rate.  Unlike Kong, Ymir shows no interest in Marisa or any other human female, though he does terrify Marisa by his very appearance. He also grabs her arm once, though his action seems to be nothing but a reflex, associated with his attempts to escape confinement.

The Venusian beast gets loose and goes on the rampage, looking for food on this alien world.  Calder strives to keep local Italian cops from shooting the monster-- not because he cares anything about the creature's welfare, but because its Venusian metabolism may hold clues that will help Earthmen survive on Venus.  Various conversations by military men establish that the U.S. wants to take advantage of Venus' mineral resources-- so that the military ethic comes down to little more than good old Lebensraum under a science-fictional heading.

Calder reveals that these creatures don't grow so big in their native habitat, meaning that its rapid growth is purely a reaction to Earth's atmosphere.  He also reveals that they can be kayoed by doses of electricity.  Since bullets don't harm the creature, Calder arranges for the Ymir to be captured in an electrical net. The army arranges to hold Ymir captive at Rome's zoological gardens.  They do succeed in keeping Ymir prisoner long enough to learn at least some of its biological secrets, which is perhaps designed to make the average viewer feel like the coming destruction is worth the candle.

A trope from KING KONG is repeated when reporters are allowed to enter the laboratory where Ymir is held prisoner, subject to continued electric shocks to keep him docile. In contrast to KONG, where the reporters actively cause Kong's rampage with their flash-bulbs, these members of the Fourth Estate do nothing to enrage Ymir: the monster is simply freed when one of the mechanisms holding him fails. Free again, the giant reptile-man pounds his way through the nearest wall and finds himself confronted by a zoo-elephant.  Harryhausen's animation establishes clearly that Ymir tries to avoid fighting the Earth-creature, but for whatever reason the elephant ignores his human handler and insists on giving battle.  At the time the resultant fight provided a high-water mark in the combination of real-world photography with stop-motion effects, though arguably Harryhausen would surpass this film with his works in the magical fantasy genre.

Ymir wins his battle with the elephant-- Venus One, Earth Zero-- and runs around Rome, terrorizing and killing (mostly by accident) Roman citizens.  Calder himself takes the field, briefly knocking down the alien by slamming into it with a car. The film concludes as Ymir takes a Kong-like stand atop the Coliseum and is finally killed by bombardments from the U.S. military.  In another departure from the example of KONG, the film's last words pronounce not sympathy for the dead monster, but for the sufferings of his opponents, as one scientist asks, "Why is it always, always so costly for Man to move from the present to the future?" The same sentiment is expressed in BEAST FROM 20,000 FATHOMS, but 20 MILLION doesn't even have one character who expresses ambivalence to the overall theme of postwar Manifest Destiny.

In my review of KING KONG I asserted that Kong's three battles with primitive predators on Skull Island served the purpose of enhancing his reputation for "kingship," and thus increasing the tragic feeling that results when mankind's superior weaponry slays the mighty ape.  But though none of KONG's characters precisely eulogize Kong, at least Carl Denham has a dim intuition of the issues at stake. In contrast, no one in 20 MILLION has the slightest moral qualm about having snatched the creature from its natural habitat, brought it to Earth to study, and ending up by killing it once it served its purpose as a research-specimen.  Additionally, despite the Ymir's quasi-humanoid appearance,  no one wonders whether or not the creature may have any degree of intelligence. Calder and his associates speak of it as "the animal" or "the thing," and the animation of the Ymir validates their view, since the creature's only emotions are those of hunger and anger.  Still, with BEAST's rhedosaurus and IT's octopus, there was good reason to presume that they were "just animals."  I usually hate to invoke sociological readings with a Marxist flavor, but even I must admit that the Earthmen's assumption of Ymir's animal nature seems awfully convenient given their imperialistic project.

Posted by Gene Phillips at 2:02 PM
Email ThisBlogThis!Share to TwitterShare to FacebookShare to Pinterest
Labels: combative dramas, the marvelous