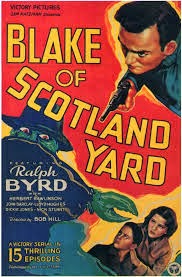 
These two serials, filmed about ten years apart, make only occasional use of their marvelous elements, and like most of their breed, are largely about good guys running around trying to keep some secret or weapon out of the hands of bad guys.

BLAKE OF SCOTLAND YARD  is a remake, with considerable alterations, of a lost 1927 silent serial.  Both were directed by Robert F. Hill of SHADOW OF CHINATOWN fame, and both, though shot in America, were set in Great Britain, though the 1937 film seems to include more American characters.  Like CHINATOWN this serial is rather stodgy in the action department, and on top of that there's barely any music to set BLAKE's mood.  There's none of the well choreographed action seen in the celebrated Republic serials, but in a way that occasionally makes the action less predictable.  BLAKE must be the only serial in which two of the heroes fend off a gang of henchmen by throwing metal plates at them!

The marvelous element here is a death-ray, invented by Jerry Sheehan (Ralph Byrd of DICK TRACY fame).  In contrast to most serials produced during or after the official beginning of WWII, where some new invention is zealously guarded as a bulwark of American security, Sheehan wants to give the ray away to the United Nations, in the belief that the existence of such a fearful weapon will discourage the act of war.  This naivete is the serial's most charming sociological aspect, though it's also of interest that the character of the title is an older, retired Scotland Yard detective, Sir James Blake (silent star Herbert Rawlinson).  Serials were often a venue where former stars ended up in their golden years, but usually not in starring roles.  Despite his age, Blake holds his own in brawls alongside Byrd's Sheehan.  The other two principal heroes, Blake's adult niece Hope and grade-school-age nephew Bobby, aren't combat-types but manage to give good accounts of themselves anyway, and Hope is a rare example of a female scientist during this period of American films.  Bobby is one of the few sources of decent humor, constantly upsetting his staid British uncle with his use of American slang.

Perhaps fittingly, the villain seems entirely apolitical: the mysterious Scorpion doesn't work for any foreign power, but merely wants the ray for his own uses.  Unfortunately, for some reason the filmmakers came up with a take on the "mysterious costumed mastermind" that is risible today and probably raised some eyebrows in 1937.  Though the Scorpion wears a face-mask to conceal his identity, he also wears a black cloak that he constantly holds over his face with his arm-- which, for good measure, has a faux scorpion-claw over it.  I can't help but suspect that the filmmakers had some notion of sending up the "clutching hand" type of villain that dates back to silent days.

I can't honestly say that BLAKE OF SCOTLAND YARD is an above-average serial.  However, it's an interesting curiosity, and I applaud the Serial Squadron's restoration of this rarely seen work. 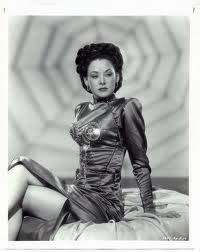 In contrast, 1947's BLACK WIDOW is well known among serial buffs. In contrast to the apolitical Scorpion, the titular "Black Widow" (Carol Forman) is the agent of an unnamed Asian power.  Under the guise of a fortune-teller named Madame Sombra,  heads a spy ring devoted to ferreting out American military secrets, and defers only to her father, a fellow dressed like a Middle Eastern potentate.  For some reason Republic became enamored of a device in which a villain repetitively sat in a chair or throne which somehow transformed or teleported him.  In WIDOW the Widow's hideout includes a teleportation-throne by which the villainess' father teleports himself from his Asian home, purely to deliver some instructions or observations that could have been delivered via radio.  The teleport-device is the only marvelous device used in the serial, and seems like it could be much more effectively transformed into a weapon than Sombra's other main device: a chair with a mechanical spider that pokes out and injects poison into its victims.

Whereas one might expect Sombra to be opposed by a federal agent or the like, somehow her opponent winds up being a detective novel-author, one Steve Colt (Bruce Edwards) and a lady reporter-tagalong (Virginia Lindley).  But Republic serials are never long on ratiocinative elements, and most of the time Colt and his female ally merely stumble across the villains in the act of doing things, thus rendering Colt's supposed detecting-abilities nugatory.  It doesn't help that actor Edwards is a bit of a stiff, though Lindley holds up her end, constantly teasing him about his fictional detective-writing.

Still, Forman's Black Widow is the central character here.  She has no depth or personal traits, but Forman plays her as a serenely confident Dragon Lady, and thus dominates every scene in which she appears.  The fight-scenes are decent if a bit programmatic.

Posted by Gene Phillips at 12:38 PM
Email ThisBlogThis!Share to TwitterShare to FacebookShare to Pinterest
Labels: combative adventures, the marvelous