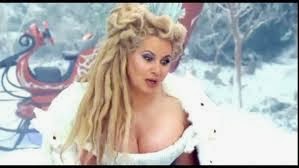 
I had only two reasons for re-watching this dismal film.  One was because, in this review of SPY HARD, I mentioned that the early Friedberg-Seltzer film was at least a little more focused than the later crop from the 2000s-- so I thought I ought to provide an example of the latter badness.  Second, I wanted to determine whether or not the film was focused enough on the element of combat-- however farcical-- to qualify as a "combative comedy."


Having learned that EPIC MOVIE does qualify in both ways, there's not much more to say about it. Like most movies from the comedy-team, it shovels out pop-culture reference without rhyme or reason.  The writers have no idea as to how to satirize the appeal of works like the Narnia books of C.S. Lewis or Dan Brown's DA VINCI CODE; they just pile on as many dumb sex-jokes and scatology as they can come up with.


The only two minor sources of appeal in EPIC MOVIE are (1) Jennifer Coolidge makes a decent comic villainess, even when she has nothing to work with, and (2) if you don't like Lewis' smug lion-god Aslan from either books or movies, you may get some satisfaction from seeing him killed off and NOT resurrected.
Posted by Gene Phillips at 12:53 PM
Email ThisBlogThis!Share to TwitterShare to FacebookShare to Pinterest
Labels: combative comedies, the marvelous