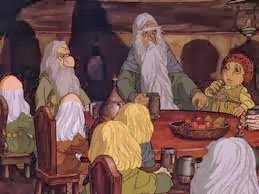 
I gave the first part of Peter Jackson's "Hobbit trilogy" a cautiously favorable review, but that was partly with the caveat that I had not read the novel in some time.  Now that I have re-read Tolkien's famous work, I still like the first part of Jackson's trilogy, even admitting that it hypes up the action-setups to absurd, videogame-intensive levels.

Rankin & Bass' 1977 telefilm adaptation of the novel suffers from a set of sins opposite to Jackson's: it tends to underplay all the violent content of Tolkien's book, and to make protagonist Bilbo Baggins so fusty and retiring that one can hardly believe that he agrees to leave his comfy home for a grand quest.

It's inevitable that even Tolkien's short book would suffer, no matter who did it, from being cut down to a film of 77 minutes.  There's no great loss in the film's eliding of such book-sections as the encounter of Bilbo's party with the bear-man Beorn, or the shortened battle of four armies at the conclusion.  Still, some elisions hurt the continuity of the narrative.

In the HOBBIT book, Bilbo and his dwarf-companions are captured by flesh-eating trolls during the night.  Gandalf is nearby, and he delays the trolls' cannibalistic plans by throwing his voice so that the trolls fight one another, and fail to notice when the sun comes up and transforms them all to stone. In the Rankin & Bass version, Gandalf doesn't intervene in the dilemma with the trolls; they simply don't notice the sun coming up until it petrifies them. I suggest that the producers of the telefilm could have sacrificed one of their mediocre songs, just to give integrity to the resolution of the troll-conflict.

The overall art-style, possibly influenced by the popular Hildebrandt Brothers Tolkien-illustrations of the 1970s, is like Bilbo far too fusty for my taste, and violent encounters-- the killing of the Goblin King, Bilbo's assaults on the giant spiders of Mirkwood-- are handled by resorting to dissolves to avoid showing bloodshed.  However, two scenes are superior to their overwrought rendition in Jackson's DESOLATION OF SMAUG.  First, the scene in which the wolf-riding trolls "tree" Bilbo and his allies, as well as their rescue by Gandalf's eagle-buddies, is well composed and well scored with Rankin & Bass's version of Tolkien's "Fifteen Birds" lyrics. Second, despite the limitations of the animation, the telefilm gives life to the scene in which Bilbo penetrates the mountain treasure-room of Smaug and bandies words with the great dtagon. The gravelly voice of Richard Boone makes for a far better dragon than the overrated work of Benedict Cumberbatch, and the scene is only hurt by the conceit of having Smaug's gaze represented by "searchlights" emanating from his eyes.

The level of violence here is kept strictly to the functional level, so that in my system it can only be judged as a subcombative adventure. 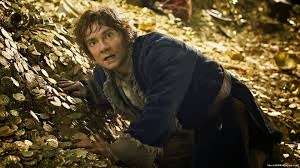 There's certainly no lack of spectacular violence in  DESOLATION OF SMAUG.  In fact, though some of the sequences are entertaining enough, the bloody duels and flying arrows often overwhelm many of the adventure-tropes of the original book.  I for one was particularly irritated by the barrel-riding sequence, which has a simple charm in the book, but in Jackson's version must be interrupted by a baffling barrage of missiles and bloodlettings.

In this section Jackson's attempt to force the HOBBIT narrative to take on the grandeur of the RINGS trilogy seems far more forced than in the first installment.  Though Ian McKellen's Gandalf illuminates every scene he's in with fantastic gravitas, the same cannot be said of the tedious "super-goblins who pursue the Bilbo party hither and yon.  Jackson's script also expands the role of the elves, and goes so far as to promote a romance between an elf-princess and one of the taller, more manlier dwarves in Bilbo's group.  But Jackson fails to give any of the elves the pomp and circumstance that they attain in the director's adaptation of the RINGS.

The scene between Bilbo and Smaug is even more poorly paced than the barrel-riding scene, and makes no sense in that Bilbo takes off his invisibility ring for no comprehensible reason.  Because blockbuster films need a major combative conflict at the climax-- even when the film is part two of a trilogy-- Jackson manufactures a long sequence where the dwarves reactivate the long dormant machines within the mountain's fastness and give Smaug some headaches before he flies away, though he is fated to be killed by other forces.

In addition to McKellen, Martin Freeman still provides yeoman service in the role of Bilbo, but the rest of the actors execute their roles with a bland lack of inspiration.  I note in passing that despite Jackson's greater violence-quotient, he doesn't get much more mileage out of Tolkien's Mirkwood spider-slaying adventure than did the Rankin & Bass version.