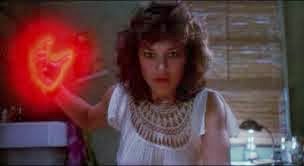 
What interests me most about the films of Fred Olen Ray is the way they illustrate the fine line between enjoyable trash and time-wasting trash.

The only Ray film I've reviewed up to this point is 1994's INNER SANCTUM II, which was unquestionably the latter trash-type.  1986's TOMB falls into the same category.

Ray's filmmaking method in THE TOMB is the same as most if not all of his other films. He assembles a cast of jobbing actors, with many repeat appearances by favored figures like Robert Quarry and Cameron Mitchell and puts them through their paces in a cookie-cutter genre-story that almost never stands up to serious examination.  In the case of THE TOMB, the original cookie-sheet was labeled "Indiana Jones," with a few borrowings from assorted "Egyptian evil" films.

In a back-lot version of Egypt, a "tomb raider" named Banning uncovers the tomb of ancient Egyptian sorceress Nefratis (Michelle Bauer), only to find that the blood-drinking worshipper of evil is revived by his intrusion on her tomb.  Banning escapes, and Nefratis goes around killing people to keep herself alive until such time as she can take on a new body, which she decides will be the daughter of an Egyptologist named Phillips (Cameron Mitchell) .  For a time Banning is enslaved to Nefratis after she implants a magical scarab in his body, apparently in order to conjure up audience-memories of the heart-ripping scene in INDIANA JONES AND THE TEMPLE OF DOOM.  All of Nefratis' murders are just as derivative and unimaginative, and Bauer has no screen presence beyond her obvious physical attributes.

Now, it's obvious that in the right mood someone could watch THE TOMB and enjoy it in a "so bad it's good" mood. But it doesn't hold a candle to films that really earn their reputation for absurdity, like the immortal PLAN 9 FROM OUTER SPACE-- which THE TOMB has the effrontery to swipe from. 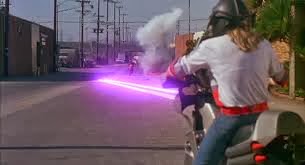 Now, when I watch Ray's CYCLONE from about a year later, I'm aware that the director uses the exact same procedure that he did in THE TOMB. Yet CYCLONE was reasonably entertaining, as long as I kept my expectations low.  Where lies the difference?

A better star does help, to be sure.  Lead actress Heather Thomas came to this project following the conclusion of her most well-known role-- tough girl "Jody Banks" on the teleseries THE FALL GUY-- which meant that she certainly possessed more "TV-Q" than Michelle Bauer ever did. While not an exceptional actress, Thomas projects a basic credibility in her underwritten role.  She plays Teri Marshall, tough girlfriend of a guy working on a super-motorcycle called "Cyclone." When her boyfriend is killed Teri has to protect her dead lover's secret against a coterie of low-level spies.

The humor is just as tortured and Wood-esque as anything in THE TOMB, though the appearance of aged Bowery Boy Huntz Hall provides a little amusement in itself.  But perhaps because Thomas might have proven to be a bigger draw because of her modest celebrity, Ray and his crew do work a little harder on the FX and fight-choregraphy.  Compared to the best that Hollywood can offer, the various car-and-motorcycle stunts are nothing special, but they are watchable.  The Cyclone doesn't seem like a super-weapon anyone would be willing to kill for, and in truth one of the plot's more moronic points is that the spies kill off the maker of the super-weapon rather than kidnapping him to learn the weapon's location.

The fight-choreography is about the same: nothing that would cause Jet Li to turn green with envy, but Thomas looks authoritative doing her stunts, particularly a big fistfight with a female agent who betrays her trust.  In reality CYCLONE didn't make Heather Thomas into a new straight-to-video action-goddess, but as a film it's probably no better or worse than those that bolstered the reputations of Sybil Danning and Cynthia Rothrock.  So though it's just as much a cookie-cutter flick as THE TOMB, at least CYCLONE has a touch more seasoning.


Posted by Gene Phillips at 2:29 PM
Email ThisBlogThis!Share to TwitterShare to FacebookShare to Pinterest
Labels: combative adventures, the marvelous