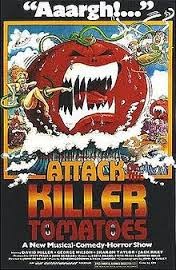 
Two surprising things I gleaned from re-watching ATTACK OF THE KILLER TOMATOES were that while the film wasn't very funny, (1) it did have a few moments that made me smile, and (2) none of those moments centered on the tomatoes.

Of course it's the eminently quotable title, not any of the film's gags, that made it a cult film despite widespread critical contempt, as well as a franchise with three sequels, a TV cartoon and a pending remake. While a lot of the supposed funny business is as boring as hell, I had to admire the tenacity of filmmaker John DeBello, who assumed five separate hats: director, producer, co-writer, editor and musician.  There's also a small degree of sociological commentary, mostly in the form of post-Watergate jabs at a dopey president who tries to defeat the Killer Tomatoes with public relations campaigns.

I've only seen the first sequel and the cartoon show, which I remember being slightly better than the original work.  But on balance the most significant thing about this SF-horror parody may be its schtick of killing a monster with awful-sounding music, a trope picked up to better effect in 1996's MARS ATTACKS! 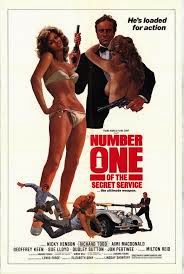 As bad as TOMATOES is, Lindsay Shonteff's NO. ONE OF THE SECRET SERVICE is far worse; a bland, predictable spoof of the superspy genre.  Shonteff is perhaps best known for directing 1967's THE MILLION EYES OF SUMURU, which was at best serviceable-- which is more than one can say of SERVICE.

One unusual facet of SERVICE is that though hero "Charles Bind" (Nicky Henson) is a Bond-doppleganger in most respects-- flirting with his boss's "Moneypenny" and taking advantage of every somewhat comely female to cross his path--  the villain of the piece is not the standard evil mastermind one finds in such spoofs as SPY HARD.  Arthur Loveday (Richard Todd) is a rich gamesman who hires the assassins of the criminal group KRASH to kill other rich people.  Why?  Well, he says he hates rich people, and though he does mention off-handedly having started out in the lower classes, the script by Howard Craig (who has no other imdb credits) doesn't try to psychoanalyze Loveday.  Loveday might have been more at home in an AVENGERS episode than in a Bond spoof, in that the AVENGERS teleseries took for granted that it existed in a "carnival mirror" version of the real England, complete with arch comments on British class structure.

Shonteff and Craig don't try for "arch," though: their goal is dopey slapstick all the way. Bind and his lady-spy assistant Anna begin to investigate Loveday, but Loveday doesn't even bother trying to conceal his plans to assassinate whoever he pleases.  Instead of having Loveday arrested and charged, Bind and Anna follow him onto a cruise ship, where both of them are repeatedly targeted by largely incompetent assassins.  Some of the assassination-methods are mundane, but a couple of them rate as "bizarre crimes" in the uncanny vein. One example of this type is a female assassin who chats up Bind and tries to bite him to death with dimestore vampire-fangs. Bind's unforgivably awful jokey comeback? "Fangs for the memories."

Just as Loveday doesn't spend any of his riches on death-rays or giant octopi, Bind's superspy arsenal is so impoverished that his armorer's initial must have been "C" for cheap-ass. His home is outfitted with a bulletproof glass wall that appears just when he needs it most, and there's a detachable machine gun in his car.  Perhaps most of the funds in SERVICE's kitty went to hire an assortment of well-known Brit actors, including Geoffrey Keen, Sue Lloyd, and Jon Pertwee.

I have to add that the film even fails at the task of offering the male viewer the sort of "ogle-fest" one gets from, say, SUMURU and many other superspy flicks, both comic and serious.  Some of the female stars are fairly comely, but sometimes SERVICE seems to go out of its way to undercut this aspect, as when Bind is attacked by a tough kung-fu female, only to find out during the fight that "she" is really a convert from the other side of the gender-tracks.

Of the two films only SERVICE qualifies as a combative comedy.
Posted by Gene Phillips at 3:36 PM
Email ThisBlogThis!Share to TwitterShare to FacebookShare to Pinterest
Labels: bizarre crimes (u), combative comedies, diabolical devices (u), the marvelous, the uncanny