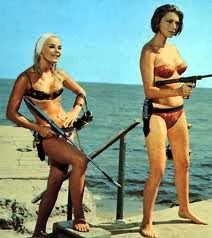 
These films featured a Bond-style updating of the 1920 toughguy-hero Bulldog Drummond, DEADLIER THAN THE MALE is one of the few eminently watchable 1960s imitations of the James Bond series.  In contrast, the second and only sequel, SOME GIRLS DO, is so tedious that one can hardly believe it emanated from essentially the same team of producer, director, writers, et al.


DEADLIER rates a "fair" rating not because its script is any more nuanced than the second film's, but because it centers upon the "femme formidable" aspect of the cinematic Bond-series.  It's axiomatic that the Bond film-series emphasizes the hero's playboy adventures far more than the book-series does. However, as a result of the cinema's greater emphasis on spectacular violence, some female characters, notably Pussy Galore of GOLDFINGER, are far more "empowered" than they are in prose.  Though the male hero remains the center of the audience's attention, many of the films play up the role of women as heroines or villainesses whose activities contradict their reputation as "the weaker sex."


Where films like GOLDFINGER and THUNDERBALL offered the femme formidable as a kind of attractive side-dish, in both of these films the curvaceous killers come close to overshadowing central hero Drummond.  Granted, the lady assassins also report to a male mastermind, Carl Peterson.  But unlike the villain of the Drummond books from whom the character takes his name, the films' main villain is even more colorless than the main hero.  At least 1960s Drummond gets a few quips almost worthy of the best Bond-lines.

Perhaps director Ralph Thomas and his collaborators wanted to steer clear of the Bondfilms' sociopolitical arena, for this Drummond is not a spy but an insurance investigator.  His adversary Peterson is a non-political game-player who sends his lady assassins hither and yon to assassinate anyone who gets in the way of his business-oriented plans for world domination.  Drummond's main purpose is to investigate the deaths for his insurance company, and he doesn't even carry a gun unless he takes it from one of his foes.

Without a doubt the strongest scenes in DEADLIER are those in which Peterson's malicious molls-- Irma (Elke Sommer) and Penelope (Sylva Koscina) go hunting for human-- and exclusively male-- prey. Peterson has a few other beauties working for him at his sanctum, but Irma and Penelope are the only ones who go about executing well-constructed scenes of sadistic murder. Some of these scenes include the use of such uncanny weapons as (1) cigars that shoot bullets when lit and (2) a poison that paralyzes its victim, but leaves him conscious as Irma and Penelope toss him from the roof of a skyscraper.


Did the scripters construct such scenes with any awareness of sadism as such?  That's hard to say, but there seems to be some slight awareness of the psychological appeal of sadomasochism. Following a scene in which Penelope binds and tortures Drummond's young nephew for information, Drummond rescues his nephew with the quip, "I never knew you were into this sort of thing."


Overall production values are good, the pace is brisk, and Richard Johnson makes a dashing albeit flatly characterized hero. The most amusing character-scene involves the nephew's girlfriend making a none-too-subtle play for "older man" Drummond, and the hero finds himself fleeing her youthful attentions, for reasons that are never specified. 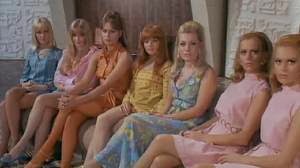 Wikipedia asserts that the film was meant to serve as a de facto pilot for a Drummond teleseries, which never came to be.  Perhaps it's just as well, for two years later SOME GIRLS DO showed what happened when Thomas and Co were no longer bothering to put their best feet forward.


Again Peterson, who survives the destruction of his HQ in the first film (but is played by a new actor), sends forth beauteous hitwomen, but though two of the women, Helga and Pandora, are the "featured slayers," other women in the villain's harem/army are seen commiting murders as well. Unfortunately, most of them are desultory and forgettable.  Characteristic of the poorly imagined death-scenes include (1) Helga and Pandora giving their victim's car a tow in their own auto, and end up hurling the guy and his car off a cliff, and (2) Pandora killing a guy with an "infrasonic" camera.  The latter scene is particularly egregious in that the budget allowed for no FX, so all we see is the actress pointing the boxlike camera at her target, whereupon the actor screams and falls down.  I wouldn't be a good myth-critic if I didn't observe that Pandora and her camera are probably meant to provide a loose parallel to the Pandora of myth and her box-- which in turn is probably a silly and labored sexual pun.  If so, the game is hardly worth the candle.


In addition to the sonic camera, some or all of the girls are now equipped with "artificial brains" that make them into de facto robots, but the script doesn't do much of anything with this notion, except occasionally have the girls short-circuit or do silly slapstick things. The girls are as beautiful as those of the first film, but they aren't given anything empowering, or even just fun, to do. Heroic Drummond-- this time saddled with two comic sidekicks-- doesn't get as many good lines.  For all I know the production costs may have been the same as the first film, but if so the filmmakers didn't know what to do with the money this time.  The only thing SOME GIRLS DO has going for it is a moderately memorable theme song.

Posted by Gene Phillips at 1:05 PM
Email ThisBlogThis!Share to TwitterShare to FacebookShare to Pinterest
Labels: combative adventures, the marvelous, the uncanny