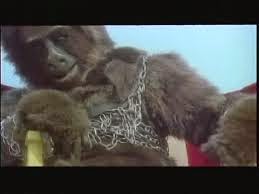 
Though QUEEN KONG is one of the most relentlessly silly film-parodies ever made in Britain-- making CARRY ON UP THE JUNGLE look like a comedy of manners by comparison-- I enjoyed it despite the mugging and the bad jokes.

Though the film was made to cash in on the 1976 remake of KING KONG, it follows the plotline of the 1933 classic for the most part, albeit with many sexual reversals, in line with the spoofy title.  The biggest change is that QUEEN jettisons Jack Driscoll, the age-appropriate "normal guy" who seeks to rescue Ann Darrow (Fay Wray) from her gargantuan fan. The film opens with the character of filmmaker "Luce Habit" (Rula Lenska), a female version of entrepreneur Carl Denham from the 1933 film. Whereas Denham stumbles across the cult of Kong on Skull Island with no prior knowledge that they are there, Luce is first seen trying to film a story in which a young male is being sacrificed by the amazon tribe of "Lazanga" (where they do the conga, as we're told over and over).  Luce's leading-man walks off the set, forcing Luce to look for a new star.  She comes across the fey young blonde man "Ray Fay" (Robin Askwith) in a nearby city, where he promptly gets in trouble for stealing an expensive poster of the 1933 KONG. Luce pays off the plundered merchant and drafts Ray to be her new star.  Some critics have claimed that Carl Denham has some submerged lust for Ann Darrow, but there's no question that Luce is definitely interested in taking advantage of this helpless male, as are many of the actresses in the cast.  In fact, Luce has such confidence in her new star that she takes her crew to the real Lazanga, trying to persuade the Amazonian natives to allow Luce to film the sacrificial rites to their mysterious deity, Queen Kong. Instead, the amazons want to buy Ray from her. Luce refuses, and she, Ray, and the film-crew return to their camp. Later that night, the amazons seek out the camp and steal Ray.  He protests a little as three buxom girls pick him up and carry him off, but suffice to say, he never evinces any manly resistance here or any other part of the film-- and for that matter, no other male characters display any forcefulness, either.

Luce and her girls rush to rescue Ray, but by the time they arrive, Ray has been placed on the sacrificial altar-- a picnic table-- and Queen Kong arrives to eat her dinner. But like all other females, the Queen is immediately smitten with Ray's blonde wispiness, and she bears him away to her cave-home.  While Luce and her allies pursue, Queen Kong is forced to fight two local Lazanga dinosaurs, a tyrannosaurus and a pterodactyl, to keep her new mate safe. Ray, overcoming his initial fear of the Queen, even cheers her on, which is more than Fay Wray ever did for the original Kong. Given the paucity of the film's budget, it's no surprise that both beasties are very tatty men-in-suits. Yet given that the film is a comedy, the tattiness is not nearly as objectionable as the unimaginative handling of Kong's one undistinguished dino-fight in the more expensive, and more serious, 1976 KING KONG.

Kong also repels the would-be rescuers, though without loss of life, and when she chases down her lover again, Luce fells her competition just like the 1933 version, via gas-bombs. (Why does a film-crew stock gas-bombs? Don't ask.) Luce is happy to take the Queen back to England to put her on exhibit. She also plans to marry Ray, though Ray has fallen for his anthropoid lover, whom he thinks to be more gentle and caring than the demanding women of his world. I speculate that Lenska got the role of Luce because she appears to be a head taller than Ray, and she not only dominates him verbally, she even wrestles him to the floor when Ray tries to seek out his captive queen. The jealous Queen Kong breaks her fetters and finds the two of them in their apartment, knocking down Luce and stealing away a now-willing Ray.

Not surprisingly, this antic comedy does not follow the tragic denouement of the 1933 film; though planes are scrambled to shoot down Queen Kong from a lofty perch, Ray saves his beloved. He gets hold of a radio microphone and pleads for the queen's life to the women of England, asserting that she is the very essence of feminine power. Women take to the streets and protest the killing of Kong. Finally the prime minister's mother scolds him, and the politico has Queen Kong and Ray shipped back to Lazanga. Luce is last seen wondering whether or not they would accept a threesome.  The absence of a final battle exempts the film from falling into the mode of the combative, for reasons elucidated here.

QUEEN KONG is certainly not a good comedy, but it has a few amusing moments.  Today one could never get away with a scene in which the nominal hero tries to persuade a giant ape not to eat him by claiming, "I'm Jewish-- no, I'm black-- no, I'm Jewish and black!" (Or words to that effect.)

Posted by Gene Phillips at 2:12 PM
Email ThisBlogThis!Share to TwitterShare to FacebookShare to Pinterest
Labels: the marvelous