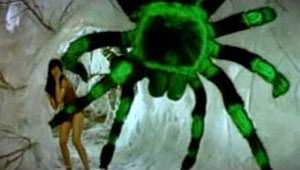 
Irwin Allen's 1960 adaptation of Conan Doyle's LOST WORLD-- Allen's second metaphenomenal outing, if one counts his helming of the execrable STORY OF MANKIND-- displays the writer-director's emphasis on flashy-looking, if ultimately cheapjack, special effects and generally banal melodrama. That said, the 1960 LOST WORLD, like the many Allen SF-teleserials that retain some nostalgic resonance, is far from a total loss.


In contrast to the 1925 LOST WORLD, there are no ape-japes in this film.  The Challenger expedition does not meet any subhuman aborigines; only various South American peoples who have emigrated to the prehistoric plateau, though this tribe is alleged to be cannibalistic in nature. Another major contrast with both the source-novel and the 1925 film is that a volcanic explosion is brought in to destroy the Lost World-- apparently for no other reason than for a big splashy climax, somewhat in tune with the destruction of Skull Island in SON OF KONG.


Still, Allen's effort owes much to its predecessors. From the novel, it takes a plot-device not employed in the 1925 film: the expedition is menaced by a guide named Gomez who only joins the group in order to revenge himself on John Roxton. In the novel, Gomez wants to kill Roxton because the huntsman murdered Gomez's brother, a "half-breed" slavemaster. In Allen's film, Roxton is not quite so heroic, having brought about the death of Gomez's brother through negligence. The addition of the "traitor within" plotline proves mildly diverting, which is more than one can say for the romantic angle.


In the 1925 film, the romantic conflict-- in which two men vied over a young woman devotedly seeking her lost father-- was nothing special, but it had a certain tried-and-true predictability to it. Here, the intruding female presence is Jennifer Holmes, the daughter of a rich newspaperman. Though she claims to be able to shoot like a man, she's never seen doing much of anything in the Lost World. Her main motive for joining the group stems from her romantic relationship with "great white hunter" Roxton, as she's hoping to persuade the world-weary adventurer into some permanent alliance.  This is a rather petty reason for her to join the adventure, but to be fair, the script doesn't give anyone-- except Gomez-- a very strong reason to undertake this hazardous adventure.

As in the other versions of LOST WORLD, reporter Ed Malone is still the viewpoint character through whom the audience meets Roxton, Professor Challenger, and assorted other support-characters-- not to mention the dinos of the Lost World. For no particular reason Malone conceives a passion for Jennifer, though for most of the film there's not much evidence that she reciprocates. Roxton and Malone never compete with one another in the novel, and their competition in the silent film is only implicit, but here the two men, aware of their mutual admiration, come to blows over Jennifer. By film's end, Jennifer apparently gets her fill of Roxton's elusiveness and chooses Malone as her beau. Certainly the script, co-written by Allen, gives no other reason for her choice.

With the exception of the elimination of the ape-people, the 1960 film's biggest alteration is bringing another female character into the story. She belongs to the maybe-cannibal tribe of the plateau, but she's never given a name-- being billed as "the Native Girl." She's captured by the Challenger expedition when they catch her spying on them, but she remains a cipher, never learning to speak even pidgin English, and none of the adventurers are able to speak her native language.  Whereas the rest of the hostile Indians on the plateau are only interested in killing the intruders-- and Challenger does at least admit that his group has intruded on the Indians' culture-- the Native Girl finally becomes an ally, though the Native Girl's decision to side with the strangers over her own people gets no more emphasis than the reasons for Jennifer's romantic alliance.  The eccentric character of Challenger gets a little more attention here than in the version in the 1925 film, but the romantic triangle still gets the lion's share of dramatic attention.

LOST WORLD's dinosaur-FX are not usually highly rated, as most of them are devised by trick-photography of real animals with appliance-modifications. The most I can say for them is that while there's nothing revolutionary here, the prehistoric beasties are a little more interesting than most of the human characters.

One incident in the narrative seems to touches on mythological content. In the first encounter with the Native Girl-- the first human the explorers see on the plateau-- she flees from Malone. Though one wouldn't expect her to run into a section of jungle that presented more peril than her pursuer, she hightails it right into an area of jungle festooned with giant spider-webs-- which have been placed there, predictably, by a giant spider.  That TNG is not friends with the spider is indicated by her fearful reaction to it, though the big arachnid lets her get by pretty easily-- and then blocks Malone, who easily shoots the critter dead. It would have been interesting if there had been some symbolic equivalence between the spider and the feminine "man trap." However, that would be more in the vein of Gene Roddenberry. When Irwin Allen has presented anything that even looks like a myth-symbol, I usually suspect that he only strayed into symbolic waters because he didn't know where he was going from the beginning.
Posted by Gene Phillips at 2:30 PM
Email ThisBlogThis!Share to TwitterShare to FacebookShare to Pinterest
Labels: the marvelous