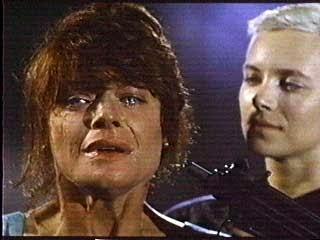 
I had seen PROJECT SHADOWCHASER III years ago on cable, and for many years had no idea what the other installments were like. YouTube gave me the chance to find out.

The opening film from 1992 is essentially "Die Hard with a Killer Android."  In a near-future setting some terrorists break into a government installation. There they find and liberate an intelligent android being kept on ice. The android, name of Romulus (Frank Zagarino), takes over the gang, and they invade a high-rise hospital in order to kidnap the daughter of the president.  More or less by accident, the authorities also unleash a convict from cryo-sleep, name of DaSilva (Martin Kove). To keep his freedom DaSilva braves the high-rise and begins knocking off terrorists in the approved John McClane manner, with a little help from the aforesaid daughter (Meg Foster). It's a tolerably executed cheesy action-flick with decent direction from Jon Eyres, also the director on the other two in the official series. 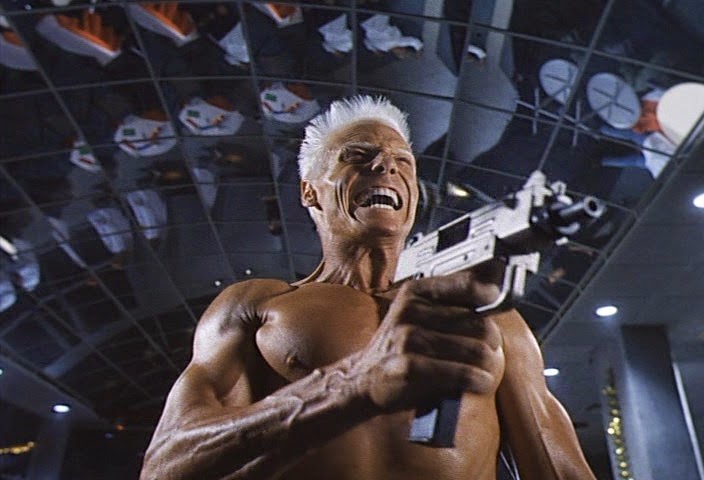 Next up is 1994's SHADOWCHASER II, aka NIGHT SIEGE. Although Romulus appears to be destroyed at the end of the 1992 film, again an android-- this time without a name, but identical in appearance and again played by Zagarino-- recruits a bunch of terrorists. With this gang he proceeds to take over a nuclear plant, apparently in the hope of triggering armageddon. This time the tough McClane-clone is Frank (Bryan Genesse), a janitor at the nuclear facility, who for no clear reason is a master of the martial arts.  Of the three films, this one puts forth the best hard-hitting fight-scenes, particularly a face-off between Unnamed Android and Forgettable Janitor-Hero at the conclusion.  Female lead Beth Toussaint is both a physicist at the plant and a working mom, so of course her young boy arrives during the chaos in order to up the tension a bit. 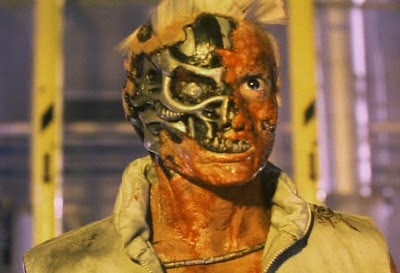 PROJECT SHADOWCHASER III, however, has even less to do with the earlier two Eyres films than they do with each other. Number Three jumps forward to an era in which mankind is now exploring space on a regular basis. Our viewpoint characters are a motley crew aboard a communications station orbiting Mars, all of whom are just minding their own business, shooting the shit and complaining about work. Then an ore-mining spacecraft suddenly careens into their vicinity. The crew manages to steer clear of the onrushing spaceship-- until it turns around and deliberately runs into them.  The protagonists soon learn that the ship's original crew has been killed by a berserk, again nameless android (Zagarino), who then begins stalking the comm-station crew as well. For absolutely no reason, the android can assume the appearance of anyone he sees-- which means that, in essence, Eyres and his scripter decided to borrow not from one movie, but two: the original ALIEN and 1982's THE THING.

Ironically, though Eyres' handling of the larger ensemble of actors and the low-budget ALIEN-derived setting is quite skillful, Number Three is the least enjoyable of the series.  The actors are skilled but their characters are all cookie-cutter types, and whatever charisma Zagarino displayed in the earlier films is mitigated by all the shapechanging.

Given that dozens of DIE HARD imitations appeared during the nineties without birthing sequels, I speculate that Zagarino's lean muscular bod is the main reason the first film managed to spawn two more entries.  It's interesting that while Zagarino doesn't look anything like Alexander Godunov, who played the long-haired blonde crook in DIE HARD... 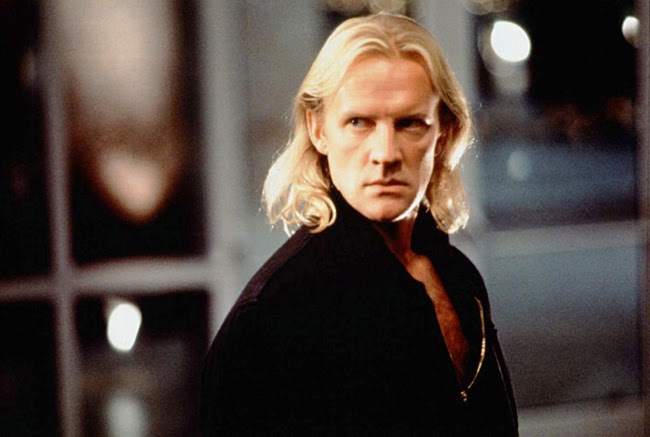 ...it might be that Zagarino's essaying of yet another "blonde muscleman" sparked in video-viewers some enthusiasm for this particular DIE HARD knockoff. But as I say, it's pure speculation on my part.

Since the android in the third movie doesn't have any decent opposition, that and its copying of ALIEN relegate it to subcombative status.