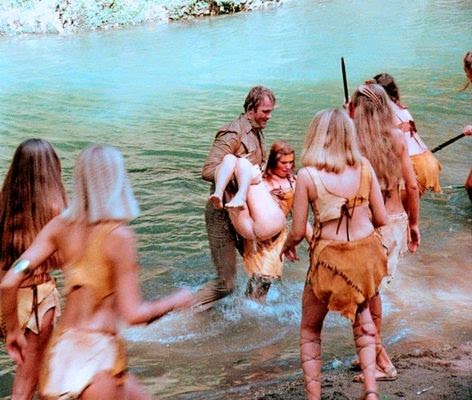 
Most of my entries with the trope "exotic lands and customs" stem from the era of Classic Hollywood, the period which probably enjoyed the greatest number of "exotica" films. Still, the 1979 film GOLD OF THE AMAZON WOMEN is interesting for its use of the same tropes in a much later context. Unfortunately, nothing but the time in which this telefilm was produced proves interesting.

Bo Svenson plays a character with a roughly sound-alike name, Tom Jenson, who gets roped into a search for the Seven Cities of El Dorado, somewhere in South America. He goes down with a couple of allies, one of whom is killed early in the adventure. Unbeknownst to Jenson, he's also pursued by a rogue treasure-hunter, played by Donald Pleasance.  In looking for El Dorado, Jenson and his buddy meet a tribe of matriarchal Amazons, who keep their men in sexual thrall and are ruled by the middle-aged Na-Eela (Anita Ekberg).

I'd like to say that GOLD is a enjoyable cheesefest like WILD WOMEN, willing to have some fun with the notion of a matriarchy that demotes men to second-class citizens. However, the script for GOLD merely hits all the expected notes. Jenson, upon arriving in the Amazon village, has not one but two cutie-pie warriors fighting over him. Pleasance's goons attack, forcing the Amazons to join forces with Jenson and his surviving buddy. Over time the Amazons come to have a slightly more enlightened view of men, though it's not clear what caused their society to turn matriarchal in the first place.

The film is uncanny not only with regard to the Amazons, but also an illusion used by another tribe to defend El Dorado: an illusion in which a tribesman appears to have not just his head, but his whole body shrunken down to doll-size.

All in all, GOLD is a pleasant time-waster, but nothing beyond that.

Posted by Gene Phillips at 3:49 PM
Email ThisBlogThis!Share to TwitterShare to FacebookShare to Pinterest
Labels: enthralling hypnotism and illusionism (u), exotic lands and customs (u), the uncanny