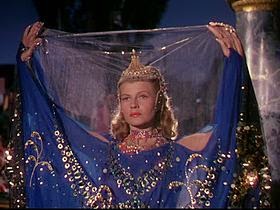 
Critics long before me have observed the curious two-sidedness of Hollywood religious epics. Thematically, whether they adapted stories from the Bible or latter-day fictional works like THE SILVER CHALICE, the films advocated Christian values such as modesty (i.e., no sex) and forbearance (i.e., no violence). But most of the epics sold themselves to the masses on spectacles of sex and violence, usually displaced to evildoers like Romans, Philistines, and the like. Additionally, the Biblical films often had to expand minimally described selections from scripture in order to give them dramatic unity-- and some did it much better than others.

The 1953 SALOME, directed by longtime spectacle-director William Dieterle, had to bring together a coherent story out of Matthew and Mark, contemporary historians like Josephus, and Oscar Wilde's famed stage-play SALOME, which is said to have invented the name for Salome's dance, "the Dance of the Seven Veils." But whereas Wilde used his version of the famed dancing-girl as a meditation on feminine perversity, the American film labors to make Salome into a model of pious nobility.

From the older works come the central, probably non-historical plotline: that Herodias divorced her former husband and married his brother, Herod Antipas, ruler of the Jews albeit under the authority of the Roman occupation. Since Jewish law did not recognize this re-marriage, John the Baptist condemned Herodias and Herod as adulterers. In the Bible, the queen's unnamed daughter, who talks Herod into executing the Baptist, does so at her mother's behest and has no animus against the prophet.

In the film, Salome (Rita Hayworth) spends most of her youth in Rome, where Herodias may have sent her to keep her away from her lustful stepfather. When she attempts to marry a Roman citizen, she's sent back to Herod's court in Galilee. On her way there she forms a relationship with one of the Romans escorting her, Claudius (Stewart Granger), who is secretly a Christian who knows and respects John the Baptist. In Galilee Salome does get scoped out by her uncle/stepfather Herod (Charles Laughton), while Herodias (Judith Andersen) complains to her daughter that the Baptist is turning the populace against her with his condemnations.

Salome, though she is the star of the show, is oddly defined by other people. To Claudius, she is his potential lover and a potential convert. To Herod, she is an object of seduction. To Herodias, she is a tool to accomplish her ends, which are to silence John the Baptist.  Salome is also easily swayed by others' opinions. She initially sympathizes with her mother, finding John's harsh law "senseless," but after listening to one of the Baptist's public rants, she quickly comes to value the holy Jewish laws, even though she's been raised to have a cosmopolitan Roman outlook. It's somewhat suggested that her love for Claudius, rather than any personal epiphany, causes her conversion.

From this description, it should be evident that most of the film is concerned with the high intrigues of court life, though through Claudius' eyes the audience witnesses Jesus performing one of his miracles, thus slotting this film firmly within the marvelous domain. Strangely, the film's biggest deviation from scripture is that here Salome agrees to dance before Herod not to serve Herodias' end of destroying the Baptist, but with the idea of preserving the prophet's life-- an aim that goes wrong thank to Herodias' meddling. In the end the corrupt rulers are brought low and the glamorous "power couple" of Claudius and Salome are united in Christian bliss.

The film's reading of the period's politics is no more or less simplistic than other religious epics of the time. Still, SALOME's script has to work harder to convince American audiences that Herodias' re-marriage is unremittingly evil, so she and Herod are also portrayed as standard pagan tyrants, albeit not very convincingly.  Laughton's Herod is just another lustful ruler, but Judith Andersen gives Herodias not only intensity, but a degree of psychological complexity: it's not impossible to read her desire to "pimp out" her daughter to please Herod as a mother's resentment of her daughter's youth and beauty. Granger is undistinguished as Claudius. Hayworth's talents were not overly challenged by this pious dancing-girl, though in the same year she showed her acting abilities to much greater effect in MISS SADIE THOMPSON.