THE GHOST AND MR. CHICKEN is very probably the most well-remembered of Don Knotts' short spate of starring films in the 1960s. All of these were essentially big-screen television movies, though these films weren't as solidly aimed at juvenile viewers as Knotts' 1970s flicks. I like CHICKEN as much as the average baby-boomer, but it doesn't reward many repeated viewings.

The plot is one with the many "phantasmal figuration" films of the Classic Hollywood period. Knotts' character Luther Heggs (great name!) is a typesetter in a small Kansas town, but he yearns to graduate to the higher social status of a reporter. Luther, like most Knotts characters, is perpetually nervous and the butt of jokes from the town bullies. He also yearns after local cute-girl Alma, who is being dated by one of Luther's rivals at the newspaper. Luther does make some progress with the girl, but the junior reporter's not overly thrilled when his editor wants him to promote the paper by spending the night at the supposedly haunted Simmons house.

The spooky old house and its faux-horrors, accompanied by the eerie score of Vic Mizzy, come close to stealing the show from Knervous Knelly Knotts, who witnesses all manner of ghostly sights but then can't reproduce them for anyone else. It's surprising that director Alan Rafkin and his scripters do so well with the scary stuff, for all were basically laborers in the fields of episodic television, and none of them have strong metaphenomenal credits. Yet the near-climactic scene, in which Luther, alone and deserted by everyone else, hears the eerie music again and forces himself to brave the forbidding house, is arguably better than many similar scare-sequences in the "old dark house" movies of the 1930s and 1940s.

Knotts' jittery routine does get a little tiring at times; personally, I think his most well-rounded movie performance was in 1968's SHAKIEST GUN IN THE WEST, also directed by Rafkin. The explanation of the "ghosts" via gimmicks-- in particular an organ in the old house that can play automatically-- is given a mild send-up. At the film's conclusion, when Luther and Alma are being married, the organ in the church-- which one would not expect to be "gimmicked-up" begins to play as if by invisible hands, and continues to do so through the remainder of the credits.  This, however, is not an intrusion of a short-lived marvel, as I've written about here; rather, it's simply a "fallacious figment," which is not meant to be taken seriously within the film's diegesis. 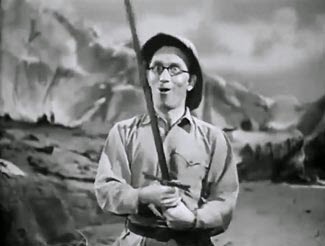 The British wartime comedy KING ARTHUR WAS A GENTLEMAN pretty much deserves its obscurity. A winsomely-named wimp named "Arthur King" enlists in the army and proves himself a screwup of the well-meaning kind. The only thing that keeps ARTHUR from being a routine service comedy, filled with far too many forgettable musical numbers, is a gag that Arthur's barracks-mates play on him-- a naturalistic "phantasmal figuration," as it were. The other soldiers find a rusty old sword in the trash, and, knowing that Arthur treasures various fantasies about the archaic King Arthur (whom he deems to have been "a gentleman"), they convince the bumbler that the sword is the real Excalibur.

The real joke is on them, though. While the sword evinces no magical powers, Arthur becomes more formidable on the battlefield while holding it, and even captures a squad of Germans while wielding the blade. This is the film's one interesting sociological theme: portraying a blundering goof as being able to tap into the moxie of King Arthur, particularly at a time when enlisted Englishmen were facing the realities of World War II.

Since the hoax about the sword is naturalistic, and only works because of Arthur's belief in it, it's likely that it's never been listed in any fantasy-film concordance. However, it does have another "fallacious figment" that comes a little closer to the world of the marvelous. After Arthur is informed of the hoax, he tosses the sword into the nearest body of water-- whereupon a feminine hand, implicitly that of "the Lady of the Lake," reaches up from the waters and pulls the sword back down into her domain.
Posted by Gene Phillips at 3:43 PM
Email ThisBlogThis!Share to TwitterShare to FacebookShare to Pinterest
Labels: delirious dreams and fallacious figments (n), phantasmal figurations (n), phantasmal figurations (u), the naturalistic, the uncanny