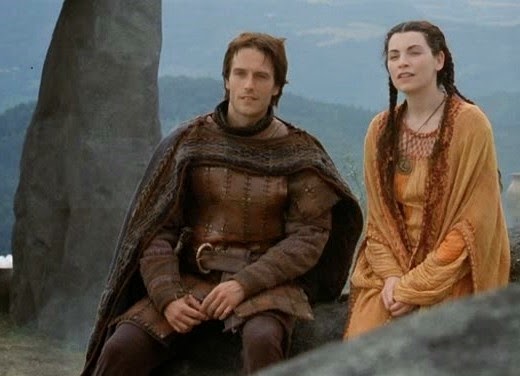 After I finished Marion Zimmer Bradley's mountainous, overwritten 1982 MISTS OF AVALON-- reviewed here-- I immediately got hold of a DVD of the 2001 TNT teleseries adaptation. I wasn't expecting a lot. The TNT Channel had turned out a significant number of telefilm adaptations in the early 2000s, but few if any garnered noteworthy reviews.  At the same time, I thought that a pruned-down version of Bradley's story could have been an Arthurian masterpiece, at least on the level of Boorman's brilliant if eccentric 1981 EXCALIBUR.

TNT's MISTS isn't a masterpiece, but it did satisfy many of my wishes. It was inevitable that a film-adaptation would have to jettison most of Bradley's repetitive internal monologues, but there was a chance that it might have just descended into banal cliche. Ironically, scripter Gavin Scott's next finished project was just such a disaster: the 2004 teleseries adaptation of Ursula LeGuin's EARTHSEA books. Happily, the MISTS movie keeps the general rudiments of Bradley's main characters: Morgaine, Arthur, Igraine, Vivian, Morgause, Lancelot and Gwenhwyfar.  The film does make substantial alterations in its latter half. For instance, the movie eliminates some of Morgaine's unheroic actions, such as the plot in which she uses her stepson Accolon against the King, but even in the novel this was no more than a side-plot. Morgaine is made more generally sympathetic, and as if in compensation her aunt Morgause is made more of a deep-dyed villain. Morgause has a much more central role in corrupting Mordred, so as to bring about the fall of Arthur's fortunes and of Camelot,

The film does adequately with the book's "Christian vs. pagan" theme, but as I noted in my review, Bradley's own handling of the theme was also just adequate, even though she devoted much, much more space to it. Both the book and movie conclude with Morgaine watching the passing of the pagan way of life in Britain, but although both are meant to give her some hope that the future may see some sort of revival, the film's script communicates this more concisely and therefore more effectively.  As in the book, the only "magic" in this Arthurian universe is that of psychic talents channeled into superstitious practices.  The film does unfortunately play down the rigors of Morgaine's training in becoming a priestess of Avalon, but this too would seem to be the consequence of moving from the print medium to a filmed medium.

For any viewer who wishes to see more of the standard Arthurian tropes, the film delivers them without vitiating the book's female-centric approach. For instance, when the Vivian of the book offers the sword Excalibur to Arthur, it's a long, talky scene that goes into excruciating detail about Arthur's loyalties to both Christians and pagans. The film puts across the same information but gives the ceremony some visual *oomph.*  The film, while still concentrating on the female characters, allows for more visceral battle-scenes, and even Morgaine uses a sword to defend herself in one scene.  Mordred's psychological motivations for destroying Camelot are more intense than those presented in the novel.

The novel's pervasive theme of incest is also diminished, though this may have been more for economy than for any other reason. Morgaine is still maneuvered into having sex with her half-brother, which in retrospect is not one of Vivian's better plots, given that it eventuates in the fall of Arthur's reign and the end of Avalon's influence. But there seems to have been no good reason to eliminate the sexual chemistry between Morgaine and her cousin Lancelot. Granted, the film doesn't have the space necessary to explore all the resultant jealousies of Morgaine toward Gwenhwyfar. But Bradley's scenario provides more narrative suspense, in that it leaves the reader wondering whether or not Morgaine might successfully divert Lancelot from his destined course.

The actors are generally impressive: Angelica Huston isn't given much to do with her Vivian, but Julianna Margulies delivers a fine sympathetic "Morgan LeFay Redux" and Hans Matheson excels as Mordred.

Posted by Gene Phillips at 4:14 PM
Email ThisBlogThis!Share to TwitterShare to FacebookShare to Pinterest
Labels: the marvelous