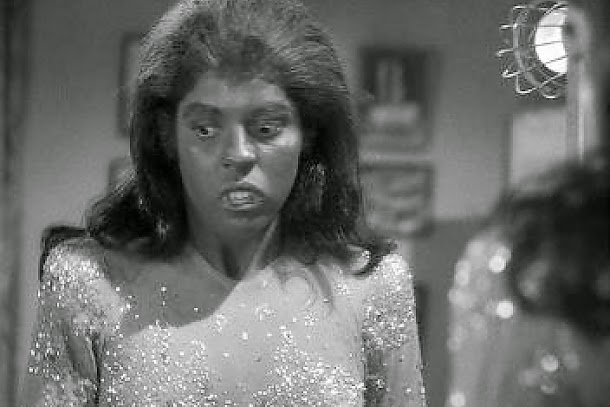 
CAPTIVE WILD WOMAN, the first of the three "ape woman" films from Universal, is easily the strongest of the three films, despite the following factors mitigating against it:

(1) Though Universal had made the classic WOLF MAN roughly two years before WILD WOMAN, by 1943 the studio had clearly moved away from putting together horror films with quasi-literary qualities. Universal horror films of the 1940s cheerfully embraced the lurid and the cheesy, possibly reflecting the management's belief that the chief audience for such flicks was juvenile in nature.

(2) CAPTIVE WILD WOMAN is built in part upon the reputation of Clyde Beatty. who had starred in Universal's successful circus-film THE BIG CAGE. Substantial CAGE footage is used throughout WILD WOMAN, which achieves only modest success at matching up the older footage with the new, using actor Milburn Stone to portray a new animal-tamer character, one Fred Mason.

(3) Though the film-series is built around "Paula the Ape Woman," the featured monster really doesn't do very much in any of the entries, in contrast to the lively "Kharis the Mummy" films made around the same time. In WILD WOMAN the nasty mad scientist Doctor Walters (John Carradine) kills as many people as the "Ape Woman" does-- more, if you consider him primarily responsible for her limited rampage.

(4) Paula is portrayed by Universal's newest attempt at creating a new sensation, Acquanetta the "Venezuelan Volcano." Though Acquanetta possessed suitably exotic features, in WILD WOMAN her performance is at best unexceptional.

(5) At least one lurid aspect of the script suggests that the ape woman's affection for animal-tamer Fred may bloom into bestial transgression. Yet it's a mark of WILD WOMAN's lack of nerve that Paula's passion never even gets as far as that of Lota in 1932's ISLAND OF LOST SOULS.

Yet, even with all of these factors weighing against the film, WILD WOMAN is a reasonably compelling B-flick. Given that the script is a fairly muddled potboiler by four credited writers, I tend to credit the film's success to the fluid directorial hand of Edward Dymytrk and to the intensity of John Carradine, who does wonders with a character far more underwritten than, say, George Zucco's mad scientist in THE MAD GHOUL, also issued in 1943 by Universal.

One interesting aspect is that just as Clyde Beatty achieved fame by working with a combination of lions and tigers in his animal-taming act, Universal is also mixing together two popular elements: a mad scientist plot and a circus-film setting. Most of the major characters work for the Whipple Circus: the aforementioned animal-trainer Fred, his girlfriend Beth (Evelyn Ankers), and her sister Dorothy. Dorothy, though not given much of a character, serves as a vital plot-point, for it's her glandular illness that prompts her sister Beth to take Dorothy to the sanatorium of the megalomaniac Doctor Walters. Unbeknownst to any of the circus-folk, Walters has been conducting experiments that are also all about "mixing." In his conversation with his nurse the doctor describes his successes in transferring characteristics from one animal to another via glandular transplants. The nurse demurs, pointing out that the animal from whom the secretions are taken always perishes. The nurse's negativity eventually leads the doctor to murder the nurse, and Dorothy will eventually perish as well, though not before Walters has managed to plunder her glands and turn the female gorilla Cheela-- purloined from the Whipple Circus-- into a dusky skinned female, whom Walters dubs "Paula."

I won't dwell on the rather convoluted plot of WILD WOMAN. At least one reviewer has pointed out that after Walters has accomplished his aim, it makes no sense that he takes her for a visit to the circus from which he stole her. It's purely an arbitrary convenience of the script: because Cheela the Ape was said to have formed an attachment to Fred, who brought her from Africa to the circus, the transformed ape-woman must be brought into proximity with Fred and his girlfriend. so that Paula can conceive a jealous rage when she sees them together. Paula's rage causes her to re-transform into a gorilla-- as seen in the still above-- and she seeks to kill Beth. Walters captures the transformed ape and takes her back to his lab, but the incident spurs Beth's suspicions, so that she ends up sneaking into the sanatorium and turning Paula loose on the mad scientist. (Despite Dmytryk's expert staging, even this sequence is a conceptual mess: Walters discovers Beth in his lab but doesn't bother to either knock her out or tie her up while he works on his next experiment, making it really easy for Beth to open the gorilla cage.)

The cosmological theme of animal-human covalence, so ably explored in Paramount's LOST SOULS and in Universal's own MURDERS IN THE RUE MORGUE, isn't explored with any depth in WILD WOMAN. However, since the plot places less emphasis on the peril of Fred mating with Paula than on Paula killing Beth, I find myself wondering if on some level Cheela/Paula is a substitution for Dorothy. It's established-- though not dwelled upon-- that Beth, Dorothy and Fred all work for the same circus, which is often a recipe for melodramatic conflict in circus films. Is it really only Cheela in the Paula-body who covets Fred, or is it also Dorothy, whose glands have contributed to the woman that Cheela becomes? But I must admit that there's no textual support for the notion that Dorothy might have had a thing for her prospective brother-in-law.

ADDENDA: One peculiar facet of CAPTIVE WILD WOMAN is that prior to Paula's first transformation back into Cheela, her skin turns totally dark prior to her becoming a gorilla. In some quarters this caused the film to be critiqued for conflating persons of color and apes. I don't think that there are any conscious racial politics in  the film: the scene simply seeks to maintain continuity with the audience's impression that the gorilla-- played by an actor in a suit-- has dark skin. Though it's been established that actress Acquanetta did have some African-American heritage, her agents apparently counseled her to omit said heritage; hence the "Venezuelan" tag. Though it's likely that someone at Universal picked Acquanetta for this project based on her "exotic" looks, I imagine that Universal had no awareness that she had any black heritage-- or else she probably would not have been given a lead role even in a B-horror movie. Ergo, any imputation of negative racial profiling to this particular Universal film has no basis in logic.

Posted by Gene Phillips at 3:34 PM
Email ThisBlogThis!Share to TwitterShare to FacebookShare to Pinterest
Labels: the marvelous